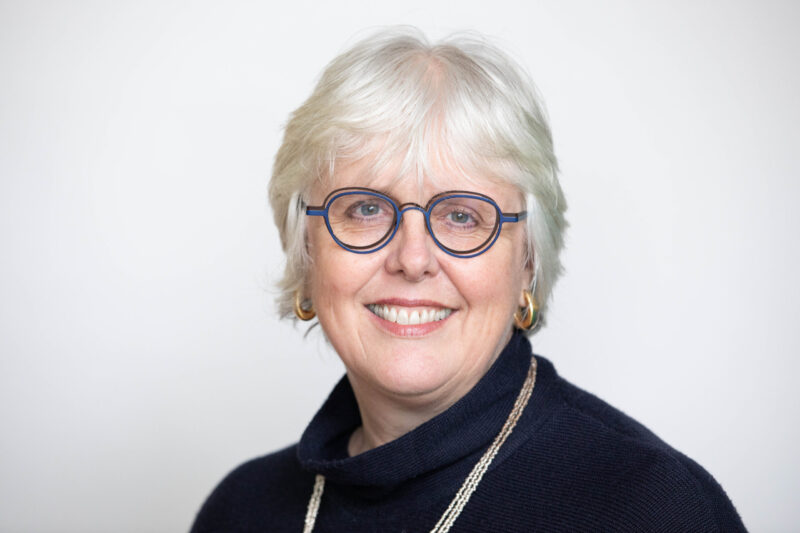 Prof Jane Ohlmeyer is a candidate who comes across as both confident and competent, someone who knows her stuff and seems to have a concrete plan laid out for every issue on the agenda. Indeed, one need look no further than Ohlmeyer’s near 60-page manifesto to get a sense of her preparedness for this campaign.

Having landed and excelled at so many leadership roles throughout her career at Trinity, with Director of the Long Room Hub and VP of Global Relations as just two examples, it is perhaps unsurprising that Ohlmeyer is a candidate with an abundance of confidence.

Ohlmeyer is forthright when asked why she is the best candidate for Provost. It is leadership qualities that she believes will be her unique selling point in this campaign.

“I’m very people centred”, she tells The University Times. “I take people with me, but yet I can make decisions, which is very important. And I’m a doer – so if I say I’m going to do something, then I’ll do it. I deliver.”

“I am ambitious for Trinity. In terms of my own career, obviously, I’m at the top of my game, so it’s not as if this is going to help me further my own career”, Ohlmeyer adds.

If Ohlmeyer has been ambitious up to this point in her career, as Provost her goals for Trinity would in no way be underwhelming. “Let’s unlock Trinity’s full potential” is a rallying cry of sorts for her campaign.

I take people with me, but yet I can make decisions, which is very important. And I’m a doer – so if I say I’m going to do something, then I’ll do it. I deliver

Asked specifically about what Trinity’s full potential could be, Ohlmeyer lays it out: “We’re back in the top 50 in the world, our colleagues are playing globally, nationally, as leaders and as influencers. We’re the partner of choice for the best universities out there. We are shaping national conversations.”

In the last decade, however, it has been like trying to catch a falling knife as Trinity has consistently slid down in the ranking. It is a far cry from 2009 when Trinity sat pretty at number 43 – as of now, College is vying for the top-100.

The question for Ohlmeyer then is what explains this free fall and why is she so sure she can reverse the trend?

Ohlmeyer says that “we have to address it not because of the rankings. We have to address it, because we want to improve the quality of the student experience, and, obviously, to create time for our academics to be outstanding researchers”.

“But it will have an absolute material difference on the rankings as well”, Ohlmeyer adds.

The issue of funding is indeed, as Ohlmeyer puts it, “the elephant in the room” when it comes to addressing issues in higher education. Ohlmeyer says that she would like to see some financial models changed as Provost, especially around non-EU students whom she describes disapprovingly as being treated as the ATM of the university.

“That for me is just not how we want to proceed as an institution. We need to rebalance and make everybody feel valued, because this feeling valued and feeling trusted is very important if you’re actually going to empower people.”

A major gripe for students – and a crippling impediment for some – is the cost of coming to Trinity. At present, the student contribution fee stands at €3,000, an eye-watering amount for many. Additionally, international student fees are sky high.

While Ohlmeyer says that she would like college to be free for everyone, she admits that “some sort of compromise” will have to be reached.

“I’d be lobbying government to increase the overall pot for education. So ideally, nobody pays anything but what the reality will actually phase into remains to be seen. But in an ideal world, you wouldn’t pay. It’s just not an ideal world.”

“If somebody cannot afford to pay to come to Trinity, they should not have to pay”, she adds. “In other words, we need to relook at how we fund it. The other thing is, there needs to be proper borrowing put in place. So, if a student has to borrow, that it’s being done in a way that’s in no way punitive to them, until they’re actually able to repay the loan.”

It is unclear whether the two-pronged ambition of ensuring non-EU students are no longer the cash cow of College while also aiming to make access to College affordable to anyone who wishes to come, can be achieved through lobbying government alone.

This is especially the case given how income streams are stretched as it is along with Trinity’s trend toward commercialisation being a bone of contention for many of the electorate. As highlighted in a recent survey among academics carried out by The University Times, many complain their academic autonomy is being intruded on by the commercially minded powers that be from above.

Ohlmeyer’s stance on this issue is nuanced, although she does offer up a welcome sound bite: “For a long time, Trinity’s been run by a spreadsheet. In other words, it’s the financial tail wagging the academic dog.”

“The way that resources are allocated within Trinity, there’s no real transparency around it. And we have a funding model that sets one area, one faculty up against another and makes it very hard for smaller disciplines”, Ohlmeyer explains.

However, she caveats that by saying: “I don’t want to knock commercialisation either, because commercialisation has actually been a very important part of Trinity’s survival over the last decade. So again, it’s about how you really balance things.”

“But I definitely don’t think that you can let financial, if you want, imperatives determine the direction of a university, which is all about taking a longer-term perspective. It’s all about research and education and the achievement of excellence”, she adds.

For Ohlmeyer taking a longer-term perspective matches how she feels about the Trinity East project at Grand Canal Docks. Scepticism is certainly sensed, given what she deems to be a massive financial undertaking which she fears may “bankrupt the mothership”.

“I would be very reluctant to go into anything, unless we were 100 per cent confident that we weren’t doing anything that in any way jeopardised our strengths in other quarters. So I love the ambition of Trinity East. But I’m also very aware of its high risk.”

If somebody cannot afford to pay to come to Trinity, they should not have to pay. In other words, we need to relook at how we fund it.

Ohlmeyer insists, therefore, that the government must fund Trinity East at an “appropriate level”, while also saying that it may be that “it takes the next decade to actually realise Trinity East”.

“That’s fine, let’s not rush anything. Let’s get it right, and not damage anything in the process”, she adds.

Another of the wide range of issues that comes up when speaking to Ohlmeyer, is that of academic promotions, a thorny subject for many of the electorate.

Ohlmeyer believes that anyone who meets the criteria for promotion should be promoted, “end of story”, she says. When put to her that this is a problem plaguing the morale of academic staff across College, Ohlmeyer fully agrees: “I’ve heard it firsthand. And I would say probably a good two thirds, three quarters of colleagues in Trinity are not happy with how promotions work. And it’s very demotivating for them.”

For Ohlmeyer part of the solution is a reimagination of the idea of promotions in the first place: “We need to look at the lifecycle of our staff. And we need to say how can we mentor you? How can we support you? How can we give you whatever is appropriate in terms of training or some sort of investment in your leadership?”

For a long time Trinity’s been run by a spreadsheet. In other words, it’s the financial tail wagging the academic dog

“You know, this be all and end all around promotions is just wrong. It’s perverse, actually”, she adds.

In this newspaper’s survey, academics brought up mistreatment of staff and toxicity as issues. Ohlmeyer is very sympathetic in this regard assuring that under her provostship there would be a “zero tolerance” policy for such behaviour.

“I think we do have pockets of bad practice in Trinity. I think there are, without a shadow of a doubt, pockets of bullying, harassment, and cronyism, you know, I think it would be – to pretend that isn’t the case would just not be true.”

Aside from these few negatives, however, Ohlmeyer comes across overall as far more positive about the future of Trinity. From establishing interdisciplinarity across campus to nurturing and creating celebrity professors such as Prof Luke O’Neill and Prof Aoife McLysaght, Ohlmeyer is full of dynamic and hopeful ideas about the future of College.

Ohlmeyer explains how she wants to help make Trinity become an environment where academics are influencing government on issues from COVID to climate in a way that is not just random: “We’ve a swathe of very, very good people who are already influencing things, but we need to amplify that. And we need to find a mechanism of doing it where it’s not ad hoc.”

Interdisciplinarity is another term that seems like more of a buzz word but in actual fact it is integral to Ohlmeyer’s campaign and a concept she clearly has a lot of passion for.

Ohlmeyer explains that Trinity, as a place where around 100 different disciplines are taught and researched, is “a very special environment, when it comes to having conversations across disciplines and interdisciplinarity”.

We need to look at the lifecycle of our staff. And we need to say how can we mentor you? How can we support you? How can we give you whatever is appropriate in terms of training or some sort of investment in your leadership?

“As the director of the Trinity Long Room Hub, and as chair of the Irish Research Council, I’ve been working and as a researcher, I’ve seen the value of having these conversations across disciplines, because where the magic happens is where the disciplines collide. I really believe that.”

“It’s also very powerful when it comes to addressing some of the big societal challenges”, Ohlmeyer adds. “So let’s look at COVID. The scientists have a vaccine for COVID. What’s going to bedevil us are things like vaccine hesitancy, the logistical part. And that’s actually the meat and potatoes of the arts, humanities and social sciences.”

Ohlmeyer is certainly a candidate who is not short of dynamic ideas, excitement, and passion. Her experience shows that she has what it takes to be a leader of the College. Questions remain, however, as to whether an electorate, who are not so happy with the status quo, will buy such a positive outlook.

Matt McCann is the Sports Editor of The University Times, and is covering Prof Jane Ohlmeyer’s campaign in this year’s Provost elections.