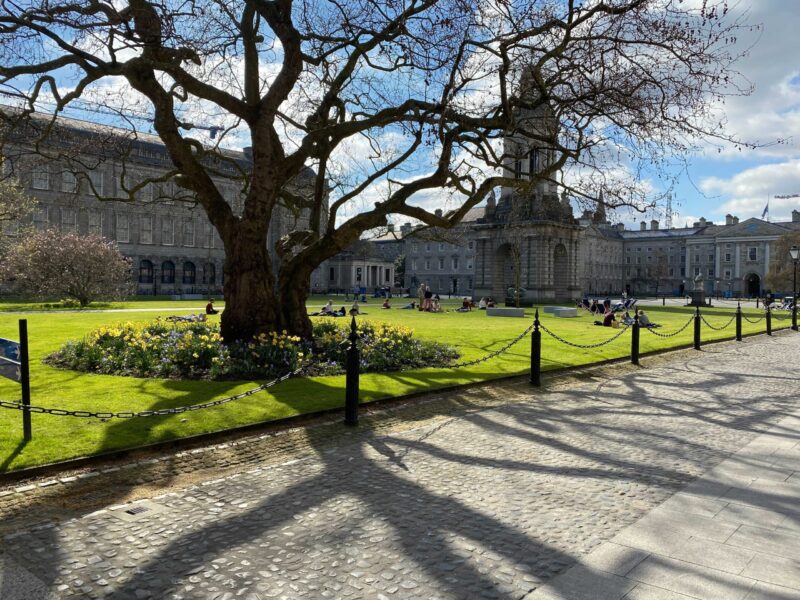 As a final-year student, I’ve seen a lot of changes throughout my time in college. The good, the bad, the perpetually ridiculous: I’ve kept fairly on top of the changes College has made and have consistently had the hot takes to go alongside them. It is with this level of expertise and context that I feel confident in the following statement: the deck chairs are single handedly the best thing College has ever done in its 429 year history.

Level five has taken its toll on all of us, of course for some more than others. From illness and loss, to loneliness and lack of academic support, to every missed social milestone producing a new pang of longing and loss, it’s been nothing short of a challenging, almost irredeemable time. And yet, when presented today with the sun, the chatter and – most importantly – the deck chairs, I felt a tiny sliver of hope.

As someone who spent years of denial regarding the positive powers of sunlight, I am a relatively recent convert of the benefits of Vitamin D. The new advent of the sun to campus and further afield has led to a somewhat rise in spirits at a time where we need it the most.

Never before has a simple contraption, some wooden legs and some fabric, signalled so much potential. Seeing people sitting out, reclined, enjoying the sun allowed me to forget for even just a few brief moments the current state of the country and the world and rejoice in one of the simplest of life’s pleasures.

As someone who spent years of denial regarding the positive powers of sunlight, I am a relatively recent convert of the benefits of Vitamin D

For years student spaces have been a persistent issue, appearing time and time again at every Trinity College Dublin Students’ Union (TCDSU) election. Aside from the most minor introduction of a classroom or two and, more often than not, the constant promises of the forever-coming-but-never-arriving student centre, there has been minimal attempts made by College to give students the spaces they’ve been crying out for, save for the dubious introduction of the monstrous tents on campus at the beginning of the year, now lying cold, vacant and threatening.

However, this new move by College has been a genuine stroke of genius, providing student spaces at last by utilising space that was always there. Although of course this wouldn’t be a year-round solution, it shows that there are creative solutions available to age-old student woes.

Of course, this probably would never have arisen in pre-coronavirus times, due to College’s reluctance to infringe on the aesthetic nature of the photos taken by tourists crowding Front Square: a background of lounging students would surely lead to a decrease in the Instagram posts College are tagged in.

The disappearance of tourists has admittedly caused a loss in revenue, but perhaps has at last allowed College to see Trinity as more than a background for photographs and more as a space that can be utilised and adapted to suit the needs of those who actually use it every day.

This new move by College has been a genuine stroke of genius, providing student spaces at last by utilising space that was always there

If nothing else, I hope these deck chairs live on in a post-coronavirus society. Initially I feared about their potential co-option by American tourists, but I think a T-Card swipe system would readily pre-empt that, with an obvious pay-by-the-minute rental option for said tourists to join in on the vibes.

The sun is a cruel mistress and could leave us at any moment, cold, wet and shivering. However, if it deigns to stay with us, then the addition of these deck chairs means that the outlook for the rest of term looks decidedly more hopeful than it did before their arrival.