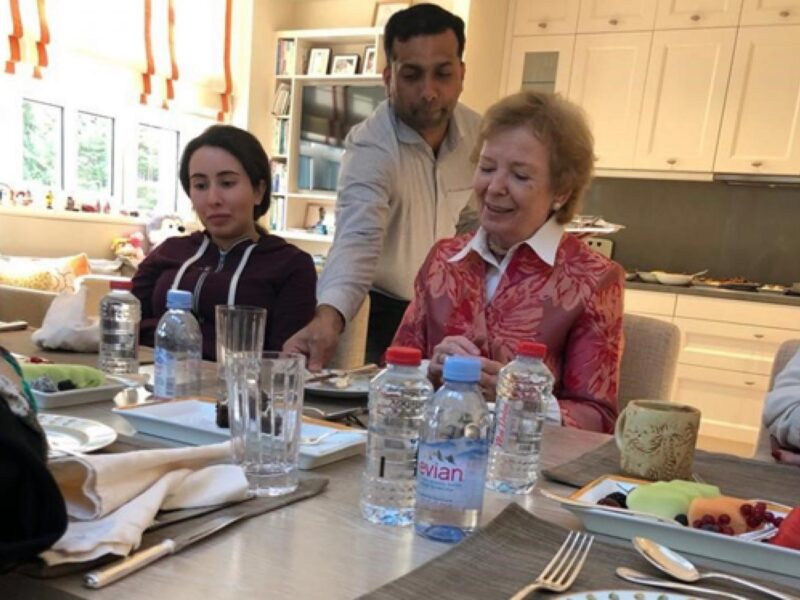 Princess Latifa and Mary Robinson at lunch in 2018.

Former President of Ireland, Chancellor of Trinity and United Nations High Commissioner for Human Rights, Mary Robinson, hit international headlines last month following her claim that she was “horribly tricked” by the royal family of Dubai. Her comments were accompanied by videos published by BBC Panorama in which Sheikha Latifa Al Maktoum stated that she was being held hostage and feared for her life.

In February 2018, Latifa, with the assistance of her friend and capoeira instructor, Tiina Jauhiainen attempted to flee Dubai. Using an inflatable boat and jet skis, the princess reached a yacht on which she remained for eight days before it was boarded by commandos and she was returned to Dubai. Latifa was not seen again for nine months.

“People were talking that she might even be dead,” Tony Cadman, Latifa’s former counsel and current co-founder and head of Guernica 37 International Justice Chambers, told this newspaper. Then, months later, “[as] we’re settling down for Christmas…on Christmas Eve, they released pictures”, explained David Haigh, a campaigner and member of the Free Latifa Campaign.

These pictures – which showed a smiling Robinson sitting next to a stunned Latifa – hit international headlines. Across the world, campaigners and activists were overcome with shock, relief and confusion.

While Latifa’s videos and Robinson’s comments signify a new development in this story, they are just that: a development

The University Times began working on this article over six months ago and has requested an interview with Robinson on two occasions. She declined both times. At the time the interviews for this piece were conducted, Robinson still had not spoken out. Nevertheless, our conversations with Cadman, Kenneth Roth, the executive director of Human Rights Watch, Haigh and Jauhiainen – during which each of them called on Robinson to come forward – spoke volumes about the impact that her silence had.

Several days after the lunch photographs were released, Robinson explained in an interview with BBC Radio Four that she had visited Dubai to help with a “family dilemma”. She said that Latifa was “a very likeable young woman but clearly troubled, clearly needs the medical care that she is receiving”.

However, Roth pointed out that Robinson’s representation of their exchange did not reflect reality: “I went, resorted, to Twitter…when Mary Robinson, in an interview with [the] BBC, suggested that… somehow I approved of her assessment. She kind of name-dropped me [to] the BBC as if I was somehow endorsing her cover story and I couldn’t let that stand because it was the opposite of the truth.” 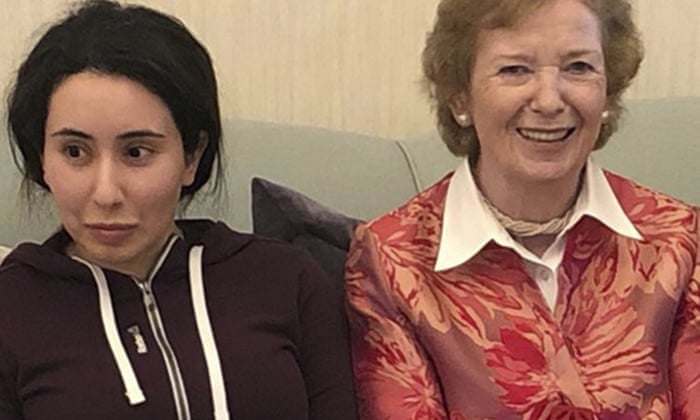 Princess Latifa and Robinson pictured at their now infamous lunch.

“I mean Ken Roth basically told her to get lost and put it on Twitter in a polite way”, Haigh said.

Across the world, it was not just Roth that doubted Robinson’s assessment, indeed, many doubted her ability to even make an assessment. As Cadman pointed out, “Mary Robinson was there for such a short space of time. She’s certainly not trained in clinical psychiatry, as far as I’m aware… how [was she] able to make an assessment in such a short space of time – that she is absolutely fine – when she is never going to be able to speak privately to Latifa[?]…[She said] she needs help, on what basis can [she] make such an assessment?”

Jauhiainen agreed: “She should not be saying anything like this in the first place. She is not qualified to make a diagnosis on someone’s mental health… How can she talk about Latifa like this based on a lunch?”

However, as Haigh pointed out, “what made it worse is that shortly after, Mary Robinson is confirmed promoting her book on climate change at the Emirates Literature Festival and we’re thinking, hang on a minute, you’ve got a BBC documentary out, you’ve got an Amnesty and Human Rights Watch report out saying that they’ve kidnapped her, all the evidence is there, QCs, the world’s two biggest human rights organisations, there’s an ongoing complaint in the United Nations where she used to head the Human Rights Council and she is there quite happily doing Emirates Literature Festival”.

Several weeks later, Robinson withdrew from the festival following the publication of an open letter calling for the release of Ahmed Mansoor, a jailed Emirati human rights activist, by MPs, authors and campaign groups around the world.

Over the next two years, people would continue to question Robinson’s involvement with Latifa. However, she kept quiet on the issue.

In 2019, Princess Haya – one of the wives of Latifa’s father, Sheikh Mohammad Bin Rashid al Maktoum, and a friend of Robinson who had called on her to assist the family in December 2018 – fled Dubai with two of her children and applied for a protection and non-molestation order against the sheikh.

In March 2020, the Family Division of the High Court of Justice issued a series of fact-finding judgements. For those who had been sceptical of Robinson’s assessment, the judgement simply confirmed their suspicions.

Referring to the fact that Jauhiainen had no contact with Latifa at all since the 2018 escape attempt, the judge wrote that “given the closeness of their friendship and the circumstances in which they parted, if Latifa were safe and well, and free to communicate, it is very difficult to understand why she has not been in touch with TJ in some way”.

Haigh explained that Robinson “may have made a mistake…People make mistakes and that’s fine but once you’ve made them and it’s clear, if that mistake caused damage, try and repair it”.

In an interview on the Late Late Show last month, Robinson said that she had made a “big mistake” and was “naive” in her dealings with Latifa’s case. She added that “100 per cent” believed Latifa now. “My heart led my head”, she told Ryan Tubridy. For many, the interview may have come two years too late.

Meanwhile, Latifa’s fate remains unknown. The Dubai royals are adamant that she is safe and “being looked after by her family”. The United Nations, however, is still looking for proof that the princess is alive.