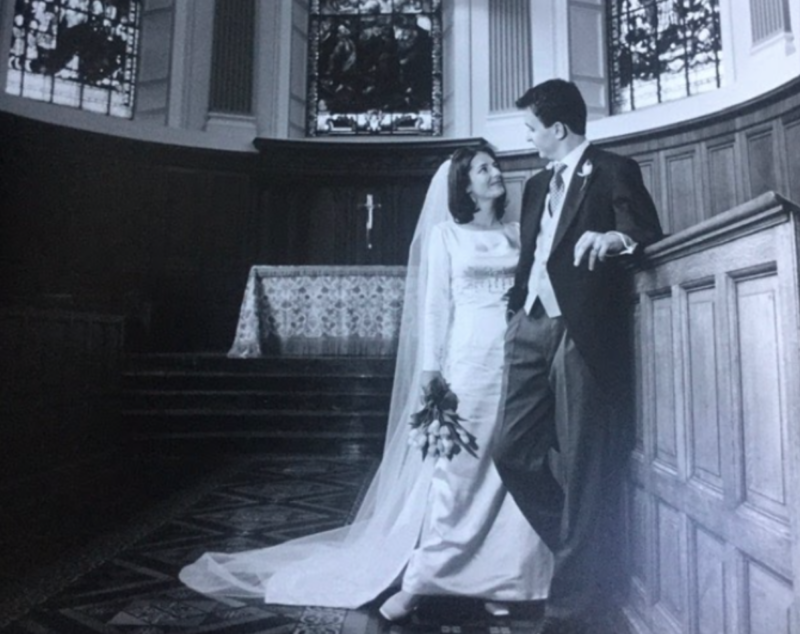 Dating back to 1798, the College Chapel has been the scene of many memorable moments for staff, students and graduates alike.

Nestled in among the buildings in front square opposite the Exam Hall you can find one of the lesser-visited buildings in Trinity: the College Chapel. Built in a neoclassical style, it was consecrated in 1798 before it was even completed. It is thought that this was due to the rebellion that took place that same year.

Standing for over 200 years, the Chapel has played a significant role in the lives of many graduates and lecturers, perhaps most notably those who got married in it. Among those graduates who have held their wedding ceremony in the Chapel are Alison and Killian O’Driscoll, graduates of Natural Sciences in 1994. The couple were married on March 6th, 1999.

O’Driscoll tells me how she and her husband Killian started going out during the year of their graduation and, as they had both studied at Trinity, the College Chapel was, “a very natural choice” for the setting of their wedding ceremony. There was really “no question of getting married anywhere else”.

O’Driscoll recalls how she had loved listening to the Chapel choir over the course of her four years at Trinity and having them sing at their wedding was in-keeping of the “intimate” atmosphere that O’Driscoll and her husband wanted for the day.

Built in a neoclassical style, it was consecrated in 1798 before it was even completed. It is thought that this was due to the rebellion that took place that same year

Indeed, the intimate family feel of the wedding extended to O’Driscoll’s very own wedding dress that her own mother had walked down the aisle in 35 years prior. Recalling a scene from her childhood as the youngest of three daughters, O’Driscoll would watch her eldest sister dressed up in their mother’s wedding dress while she and her other sister would, “prance around behind her holding the train”.

Little did her sisters know that upon having set a wedding date O’Driscoll would later walk down the aisle to surprise them with the very same gown they had used to play dress-up in as young girls. O’Driscoll points out to me that the dress, “was such an obvious choice because it fitted the tone we were setting”.

The thought of an unexpected guest at your wedding would provoke a sense of dread or concern for most. It was a welcome surprise for O’Driscoll as only two days prior her eldest sister, Louise, had given birth at the National Maternity Hospital on Holles St. Smiling as she retells the story, O’Driscoll says, “if the wedding had been anywhere else, she would have missed everything”.

Instead, she describes how her sister walked carefully down the road to the College Chapel and watched the marriage ceremony before heading back down the road to Holles St to take care of her newborn son. 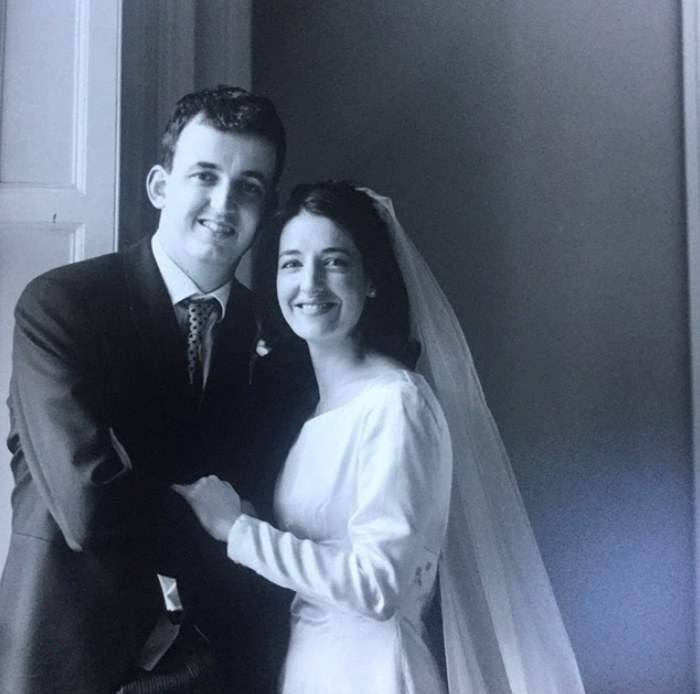 Alison and Killian O’Driscoll on their wedding day. Alison wore the same wedding dress her mother walked down the aisle in 35 years prior.

The ability to hold your wedding ceremony in the College Chapel is not only limited to graduates. Trinity staff members can also avail of the privilege, with Prof Patrick Geoghegan and Olivia Waters doing so in October, 2015.

Describing why they chose the Chapel to hold their wedding ceremony, Patrick Geoghegan says: “People go to great expense and trouble looking for venues around Ireland or abroad when sometimes the perfect location is right on your doorstep.”

A unique occurrence on the day was the presence of a film crew. Although drawing a line at filming the wedding reception itself Geoghegan describes how “at the time a documentary was being filmed about Trinity what became Inside Trinity and they wanted to include a wedding ceremony. They asked us for permission and we agreed”.

Remarking on the memorable events from the day, Geoghegan details a particularly significant memory: “A very good friend of mine, Adrian Hardiman, delivered the toast at the wedding, and he died very suddenly six months later. I’ve often reflected on the advice of the ancient poet to ‘seize the day’, and to not have waited for the following year or a different time.” Geoghegan’s words speak to the personal significance and gravity that occasions such as weddings can hold.

Indeed, the photos of the event tell a story of their own, as Geoghegan details how he and Waters came across the photographer Madi Flournoy from Nashville, Tennessee.

“I proposed in Central Park in New York in January, 2015 and the moment was captured by Madi who was there quite accidentally on holiday and started taking photos. She got our names and emails and sent us about 100 photos of the event about a week later. We brought her and her husband over for the wedding and have stayed in touch.”

Describing to me peoples’ disbelief that the proposal was caught on camera by chance, Geoghegan goes on to say: “People refused to believe that Madi was there in Central Park on holiday and believed I had arranged for her to be there, but it was genuinely fate! Honestly!”, Geoghegan declares, “even the priest joked about it during the Mass”. 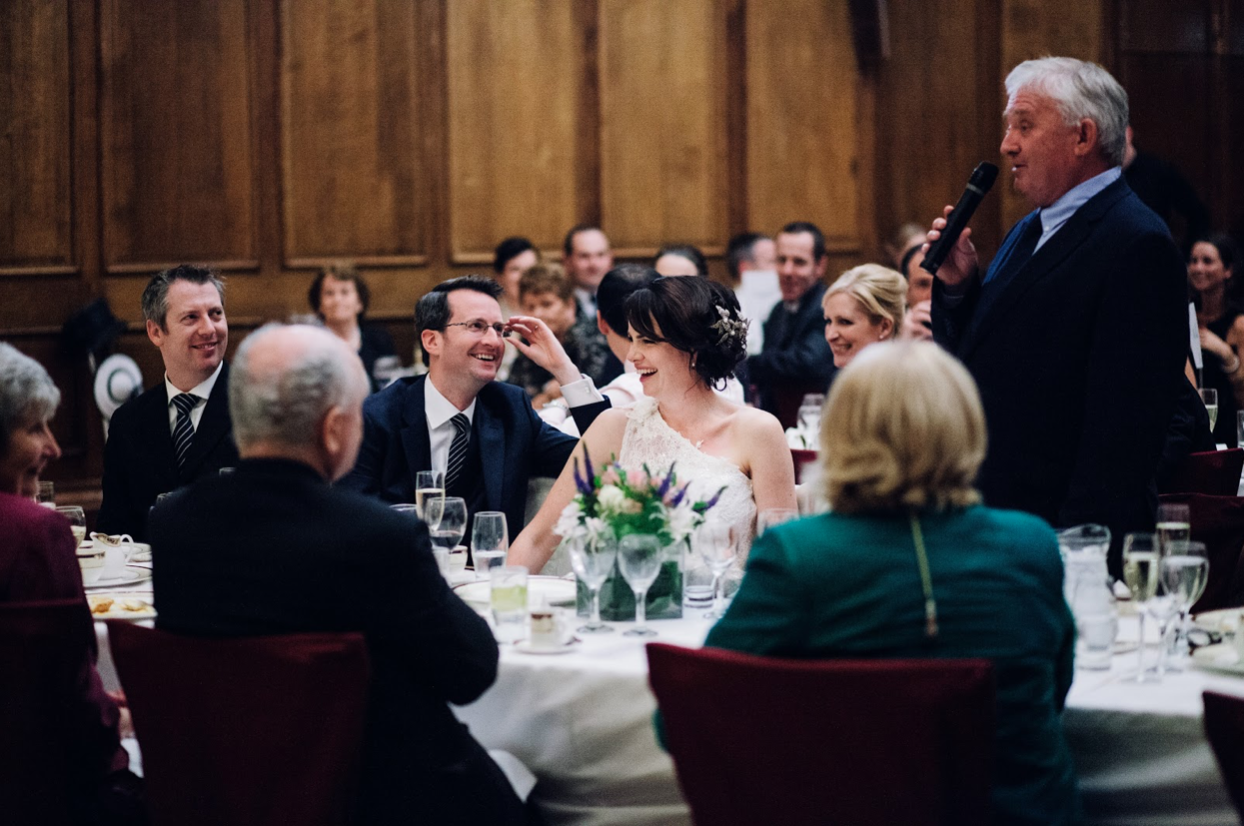 Newly wedded couple Prof Patrick Geoghegan and Olivia Waters laugh along as the late Adrian Hardiman gives a toast at their wedding.

While some of the fondest and heartwarming stories involving the Chapel have taken place on wedding days, the historic nature of the building has meant that it too holds many tales and unique characteristics. Joseph O’Gorman, CEO of Authenticity Tours and honorary treasurer of the Central Societies Committee, draws attention to the intricacies of the Chapel.

O’Gorman describes how the Chapel is unique on the island. “It was opened to the use of the four major Christian denominations in Ireland (Roman Catholic, Anglican, Methodist, and Presbyterian) in 1973.” The significance of this move only one year on from the events of Bloody Sunday on the north of the island cannot be overstated as O’Gorman points out.

“To students born after the 1998 Good Friday agreement – that is most of the undergraduate population – this may seem somewhat recherché but the willingness of these four Churches to share a common space when the Troubles in Northern Ireland were at their height was not insignificant”, he says.

Trinity has long had a history of being a cold-house for Catholics, with the first Mass that took place in College since the reign of King James II only occurring in 1971. O’Gorman tells me how this first Mass was held before the Chapel was open to use for the Roman Catholic faith. “It was held in the Public Theatre (Exam Hall) and, as a result, underneath the giant portrait of Queen Elizabeth I that hangs on the wall there. It seems that God has a sense of irony.”

With the Chapel dating back over two hundred years, it is no surprise that traditions have developed along the way. One of the most well-known is the game of marbles played between Fellows and Scholars on Trinity Monday that takes place on the portico of the Chapel. “This competition was invented in the latter part of the last century, fell into abeyance, was revived, and then recalled as a tradition that dated back to the time of Queen Bess herself. It is perhaps a reminder of the power of belief” O’Gorman states.

If the tales of weddings, historic events and grand architecture has convinced you to start planning out your future wedding, then the man you will likely become acquainted with is Fr Peter Sexton. Discussing the application process Sexton tells me that after ensuring the couple is eligible to hold their wedding in the Chapel, “I send them out documentation about the process of getting married in Trinity and the available dates”.

Unsurprisingly, the coronavirus pandemic has impacted upon the wedding ceremonies that occur at Trinity, with the maximum number of people in attendance at a wedding currently listed as 25. Fr Sexton says that currently couples who have been holding their weddings at the Chapel have only been able to invite 19 guests. This is due to the presence of not only the couple themselves but also the two attendants, the two Chapel staff on stand-by and the couple’s priest or minister.

Detailing how the pandemic has meant that “it is a difficult time for couples”, Fr Sexton tells me of the heart-wrenching decisions couples have had to make putting their weddings on hold for up to a year or more. Yet not all activity has ceased in the Chapel, with several weddings still going ahead – albeit smaller than originally planned.