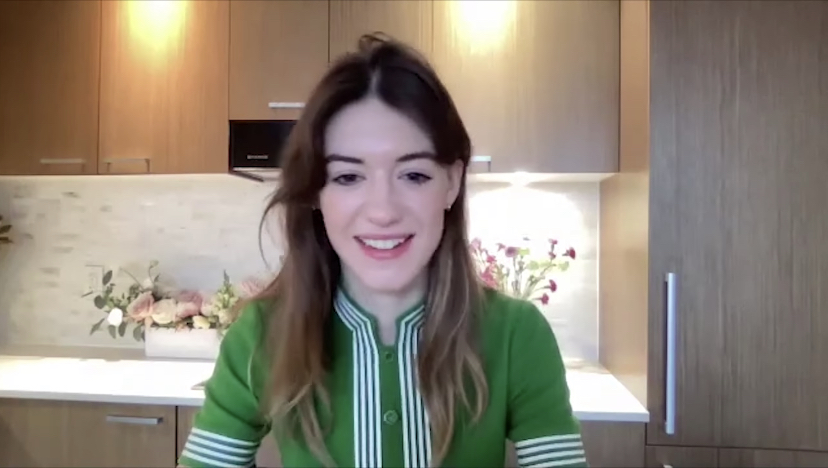 It is coming up on the one-year mark since the award-winning Irish drama series Normal People graced our television screens in the early days of the pandemic. While Trinity students were stuck at home, unable to attend lectures and wander around their beloved campus, a small respite was afforded to them thanks to this incredible depiction of Sally Rooney’s 2018 novel.

The novel’s protagonist, Marianne, was portrayed by London-born actress Daisy Edgar-Jones, who was nominated for Golden Globe and Critics’ Choice awards for her outstanding performance. This week she was invited by Trinity College Law Society (LawSoc) to receive their Praeses Elit Award.

LawSoc presents this award to individuals who have done incredible work in their chosen field, and have advanced discourse and societal thought in doing so, with Samantha Power, Stephen Fry and Bob Geldoff among its previous recipients.

In conversation with the LawSoc, Edgar-Jones began by giving viewers an insight into her career’s journey and how her upbringing influenced her decision to pursue acting. “I watched a lot of great films and went to theatre and ballet quite a bit when I was younger because my parents loved that stuff”, she said.

She explained that her family are “all in the arts in various ways”, adding that, “we’re really terrible at maths and sciences!” During her first professional job in British sitcom Outnumbered, Edgar-Jones was studying for her A-Level exams, aged 17. She described the experience as “amazing” because of how much it taught her. “I was thrust into an adult world very early on”, she said. “I had to be sensible quite quickly.”

As well as learning a lot about adult life, Edgar-Jones is grateful for her early career experiences for affording her opportunities to work alongside “incredible actors like James Nesbitt”. “I was able to watch them work and learn a lot about how to be on set and also just how to act”, she said, adding that “it was kind of like my training”.

Edgar-Jones believes that it was “the genius” of Sally Rooney and Lenny Abrahamson that made Normal People a global phenomenon. In her eyes, Rooney “is so incredible because she can take the most simple of moments and the most simple of stories and elevate it to a completely different level”, with Abrahamson’s storytelling possessing the very same power. According to Edgar-Jones, the story of two teenagers from Sligo impacted the world in such a profound way because “we crave those sorts of stories that we can see ourselves in”.

She also acknowledged the influence of the pandemic and its highly specific circumstances on the success of the series. During worldwide lockdowns when we couldn’t interact with others on a normal basis “we were all so hyper-aware of actually how important the interactions we have day to day are”, she pointed out.

Nailing the Irish accent is something that non-Irish actors often really struggle with but Edgar-Jones has been commended for her successful efforts. Speaking to LawSoc, she revealed that she “loves it when there’s a real detail to an accent”, given “how much your accent informs your being and your character”. As soon as she put on the accent, she recalled, she knew she “was stepping into Marianne and working out how she would navigate conversation”.

She also thanked Lenny Abrahamson for working with her to perfect Marianne’s Sligo twang. “He was brilliant at tuning it up”, she said. Edgar-Jones even claimed to still have these “Irishisms” in her: “Especially when I’m drunk and around my friends that’s when [the accent] gets really strong.”

When speaking about her experience of portraying a young Irish adult, Edgar-Jones referred to aspects of Irish life that were notably different from her own experiences of growing up in London. “We didn’t have the Debs. I wish we had had Debs. That would have been so fun”, she remarked. She also had to learn a lot about Trinity’s traditions such as the foundation scholarship examinations to truly understand the excitement Marianne would have felt upon receiving the prestigious scholarship.

More generally, she noted that “there’s a wonderful sense of humour to life that is present in Irish culture”. “I just love the craic really – that’s the main thing that I think is so wonderful and something I want to try and take and bring back home.”

The Facebook live stream event was saved and is available to watch again on LawSoc’s Facebook page.