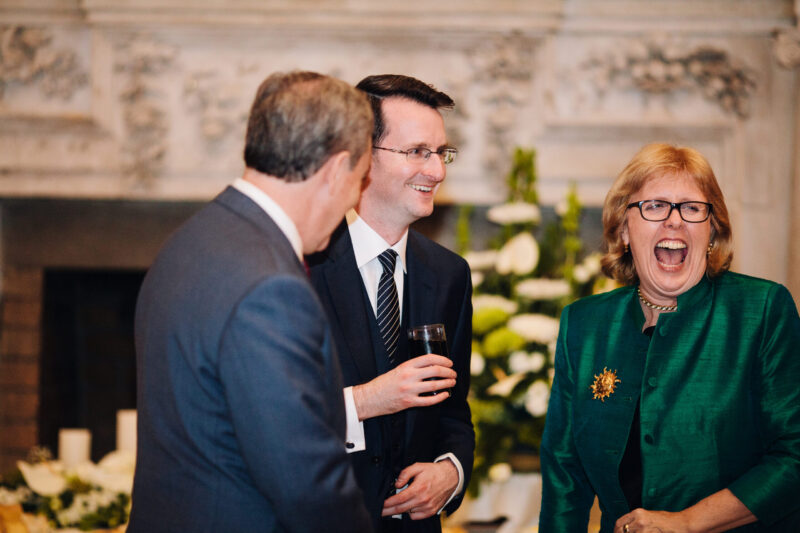 I am not surprised that Jane Ohlmeyer won the student vote last week. She is a passionate teacher and cares deeply about our students and the quality of the education we provide. I remember very well the guest classes she gave to the history students on the Trinity Access Programme when I was teaching on it. She made sure they were in the Arts Block rather than Goldsmith Hall, she inspired the students with her enthusiasm and engagement, and afterwards she kept in touch with them when they went on to do undergraduate and postgraduate degrees. Some contributed testimonials for this campaign.

Ten years ago I didn’t vote for Jane Ohlmeyer; in fact I was heavily involved in the campaign of Patrick Prendergast. Despite this, I can honestly say we never had a single cross word then or since and have become even better friends and colleagues. When I got married five years ago not only was Jane at the wedding, but as a photo recently published in The University Times shows she was right there at the top table. Jane loves Trinity and her enthusiasm is genuine. So too is the way she engages with colleagues and it is part of what makes her so unique. Jane was an impressive candidate in 2011; ten years on, with her experience as the founding Vice-President for Global Relations, and her extensive engagements with government, philanthropy and funding agencies she is exceptional.

Nonetheless, and at the risk of repeating history, I approached this Provost election with an open mind. I like Linda Hogan and worked closely alongside her when I was Dean of Undergraduate Studies and she was Vice-Provost. I also admire Linda Doyle and heard great things about her time as Dean of Research when I was on secondment working for the government. Friendship, in itself, should never be the sole reason for choosing to support someone in a Provost election. The stakes are too high and there is a responsibility to think about who would be best for Trinity over the next 10 years.

Campaigns change minds and this campaign, long and exhausting as it has been, has revealed much about the candidates, their visions, and whether they are ready to be Provost on day one without needing time to learn on the job. And it is because of the campaign that I am voting for Jane Ohlmeyer. I think undecided voters, or colleagues unsure of who to vote for in a second round should their preferred candidate be eliminated, should watch back online the excellent hustings moderated by Sharon Ní Bheoláin. For me, there were three excellent candidates on the platform, but only one who seemed completely at ease, who spoke with authority, and who looked and sounded like a Provost.

Jane loves Trinity and her enthusiasm is genuine. So too is the way she engages with colleagues and it is part of what makes her so unique

Having worked as a special adviser in the Department of the Taoiseach for three years I have a reasonable sense of how civil servants and politicians would interact with the different candidates if they were to become Provost. They would like and respect all three because all three are serious academics and leaders. But when it comes to something like the proposed governance legislation there is only one person who would convince them to negotiate a compromise, or face having it defeated, and that is Jane Ohlmeyer.

COVID has unfortunately prevented the kind of lively exchanges that were a feature of the Provost election 10 years ago. I vividly remember that the SU hustings last time were on Valentine’s Day and were memorable for two things. First, the brilliant and talented Aaron Heffernan was pretending to run for SU President as a Barack Obama-esque politician, complete with bodyguards, and gave an hilarious opening speech announcing his withdrawal from the race. Second, Jane gave one of the great speeches of the campaign, looking around at the four men at the other podiums and providing a different voice and perspective.

While I believe College can stand over its decision to exclude Sarah Alyn-Stacey, I think it has been a pity because she would have added something very valuable to the contest. While I wouldn’t agree with her on everything, there is no doubt that she represents a perspective that has been missing during the campaign. She would also have been able to interrogate the other candidates’ positions and force them to defend their records.

For example, we have heard some candidates speak during the campaign about Trinity being “broken”, they have dismissed the Promotions system as unfair and not transparent, and they have despaired at the collapse of morale. Someone like Sarah Alyn-Stacey would have been able to ask all three whether they were aware of these problems when they were College Officers over the past 10 years and in positions to change some of the things they are now criticising. Candidates cannot have it both ways. They can’t take credit for all the good things that happened over the last few years and deny any responsibility for things that are unpopular or broken.

But when it comes to something like the proposed governance legislation there is only one person who would convince them to negotiate a compromise, or face having it defeated, and that is Jane Ohlmeyer

As we all know history will be made on April 10th. Trinity will elect the first woman Provost. But this is about the future, not history. College faces multiple crises worse than any it has faced in decades, with a difficult financial future, threats from the government to its autonomy, and significant problems in how things are currently done. This election is not about electing the nicest person or your best friend. It is about choosing a leader who will fight the right fights with courage and determination, who will always have Trinity’s best interests at heart, and who will lead by example. For me, that person is Jane Ohlmeyer.

Prof Patrick Geoghegan teaches in the Department of History and was Senior Lecturer/Dean of Undergraduate Studies (2011-2014). He was a special adviser to the Taoiseach, Leo Varadkar, between 2017 and 2020.