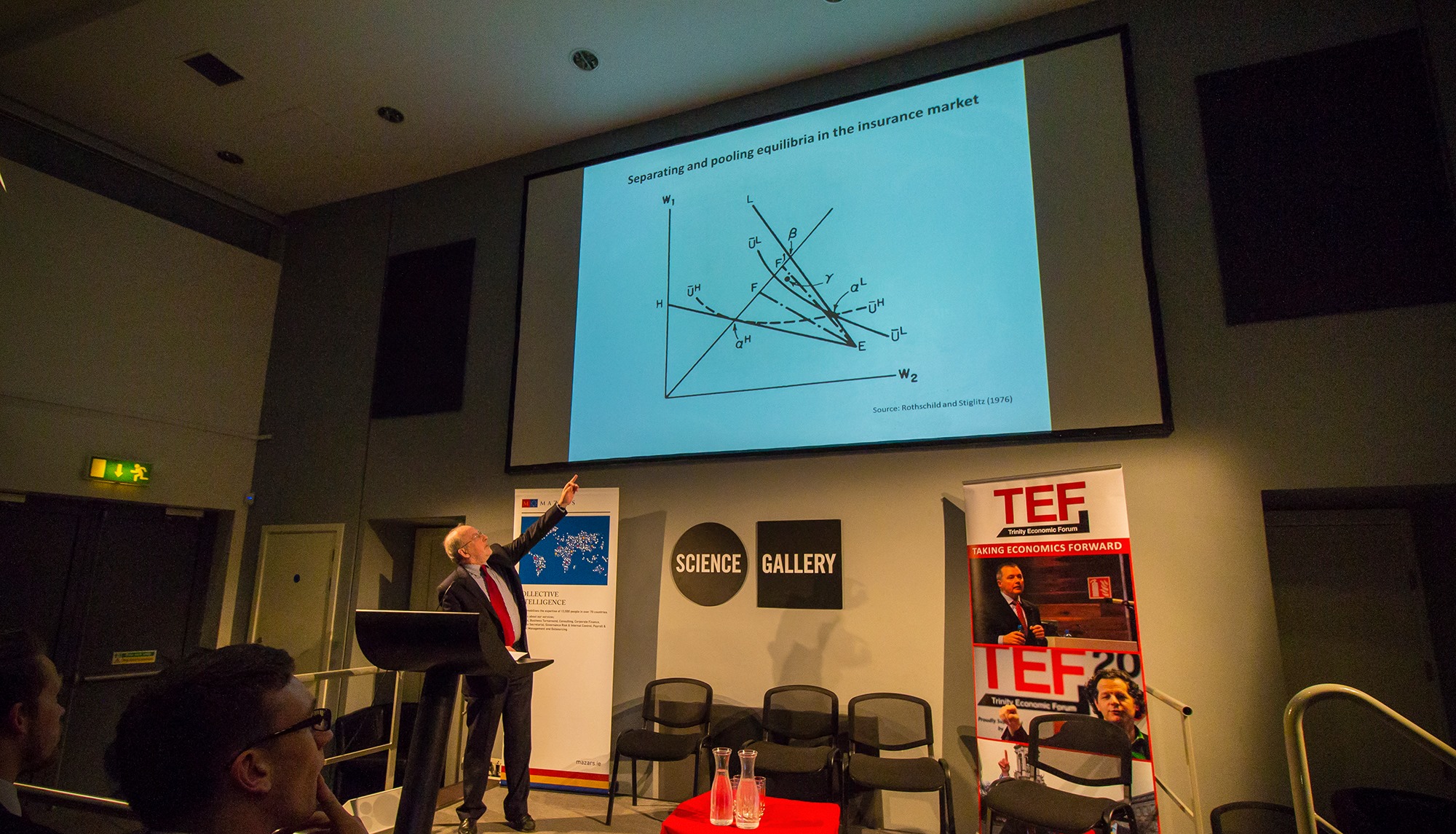 These days, we have a lot of racing to conclusions when it comes to economic policy decisions. Or so, that’s what Patrick Honohan, the Governor of the Irish Central Bank, said in his opening address at the fourth annual Trinity Economic Forum (TEF) last night.

Expected to talk about how the government and Central Bank interact in these races to conclusions, or to provide insight into how the Greek crisis might play out, Honohan instead discussed what he called the underpinnings of how “serious economics helps inform decision making”, which he did through a very brief discussion on four separate charts.

Honohan’s opening address was followed by a talk on the “Economics of Governance” by Richard Bruton, the Minister for Jobs, Enterprise and Innovation. Bruton focused his talk initially on TK Whitaker, the economist and former civil servant who served as the Secretary General of the Department of Finance in the 1950s and 60s, before going on to become Governor of the Central Bank. Quoting Whitaker, Bruton said: “Economics rarely encapsulates what government is about. Government is really about trying to enrich the lives of people.” To Bruton, this quote seemed to capture the relationship between economics and governance. Bruton said that “economics doesn’t talk enough about the sort of values that this implies”. And when economics falls short, he suggested that maybe it was because it didn’t talk about these values – values that should “underpin any government strategy”. Bruton concluded by saying that we are fortunate to have a second opportunity to “mould a new Ireland”, an Ireland with “authentic goals”, and one where “enterprise and innovation are part of our national psyche”.

Former Minister for European Affairs and Independent TD, Lucinda Creighton, joined Adjunct Lecturer in Finance, Dr Constantin Gurdgiev, and IBEC’s Pat Ivory for a discussion on “Ireland’s Place in Europe”. Dr Michael Wycherley, an Assistant Professor in Economics, chaired the panel. Creighton said that the prospect of a European debt conference “has faded”, saying that “in reality, there wasn’t” any prospect of such a conference. In spite of that, Creighton said that she believed a debt conference would help put an end to the Eurozone crisis, if done “in an orderly fashion”. Gurdgiev echoed Creighton’s calls, saying it was “really necessary”, while pointing out that discussions about left and right wing ideologies were “meaningless in the context of debt”. In particular, he said that the household debt problem was “driving the country crazy”, pointing out that the non-profit Irish Mortgage Holders Organisation, of which he is a board member, saw 2,500 cases last year. “I’ve seen people who are on the verge of suicide, and I have to refer them personally to professional help. Do we need a debt conference in this country? You’re bloody right we do”, said Gurdgiev.

Paul Ormerod, the author of The Death of Economics, spoke later in the evening about the “Economics of Decision Making”, while RTÉ’s Sean O’Rourke chaired a discussion on Ireland’s pension crisis.