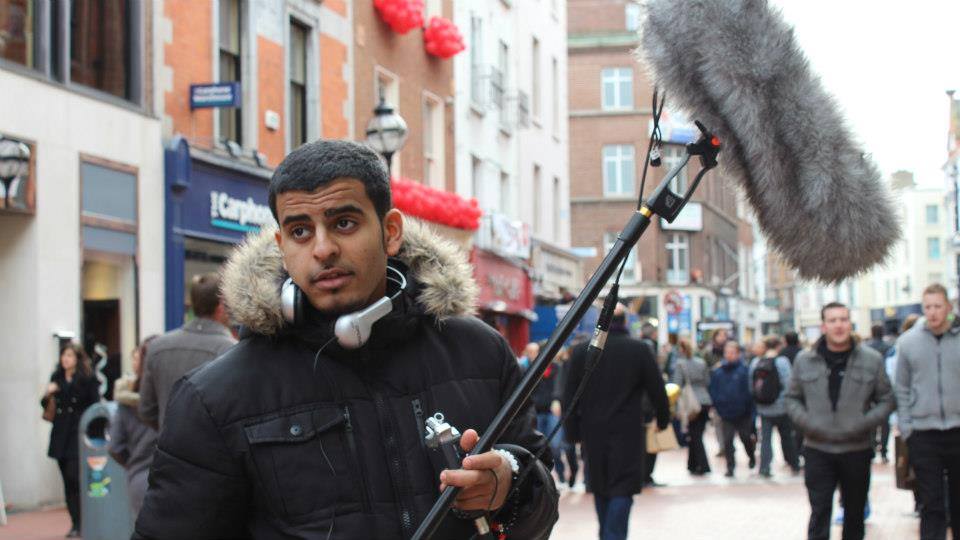 Like many other children of Dublin, Ibrahim was born in the Coombe hospital. He went to Holy Rosary Primary school in Clonskeagh and subsequently attended Rockbrook College. He enjoyed rugby and was a strong Human Rights activist. Involved in many different youth and human rights organisations, from AIESEC Ireland to Amnesty International. He was proud of his Irish heritage which he believed upheld the values of liberty and freedom of speech. His name is Ibrahim Halawa and aged just 17, while visiting family in Egypt, he was unjustly arrested and has been held without trial for the past 600 days. Now this is hitting media attention again after their interview, alongside Alan Shatter, on the Late Late Show this week.

In the summer of 2013 the Halawas were visiting Egyptian relatives. Their trip coincided with the unrest following the deposing of Morsi, the former President affiliated with the Muslim Brotherhood. The ensuing protests led to some of the most brutal massacres in Egypt’s recent history. After witnessing the violence at Rabaa square, Ibrahim and his sisters felt compelled to join what they assumed to be peaceful demonstrations against the brutality they had witnessed. The University Times spoke to Somaia Halawa, Ibrahim’s sister who was present with him and their three other siblings at these protests. She says they joined the protests because “we couldn’t just say, ‘we’re going back to Ireland, we don’t care about all of this.’ Because it could be my family one day. It could be you, anyone one day.”

After witnessing the violence at Rabaa square, Ibrahim and his sisters felt compelled to join… demonstrations against the brutality

Upon joining the protesters in the Al Fateh mosque, the chaos proved overwhelming. Somaia describes how they were surrounded in the mosque by the military for 17 hours, during which time they were attacked with rubber bullets, noise bombs and tear gas. In response to claims by the military that the protesters were holding weapons, the Halawas say that they had no violent intentions and were not aware of anyone else in the mosque in possession of arms. All four siblings were arrested and taken to a military camp, before being transferred to prison. They were held in dire conditions for three months without trial. The three Halawa sisters were subsequently released on bail. Ibrahim is still awaiting trial, the latest one postponed without cause for the fourth time.

Ibrahim’s case is a simple matter of denial of basic human rights. Arrested for peacefully exercising his right to freedom of expression, detained indefinitely in inhumane conditions and denied access to legal advice or basic medical care, he has been named a prisoner of conscience by Amnesty International who are campaigning for his immediate release.

Contrasted against the successful endeavours of the Australian government to secure the release of its citizen Peter Greste, Ireland’s official line is failing miserably. Since his imprisonment in the 2013, Ibrahim Halawa’s government has taken a somewhat passive approach to his outrageous incarceration in Egypt. Concerned with potentially damaging relations with Egypt, Halawa’s government has reluctantly petitioned Egypt’s law enforcement to ‘review his case’. Somaia criticises this approach, saying: “you can’t keep calling for a fair trial, because they don’t exist” in Egypt. Although adamant that Ireland cannot interfere with the judicial process of another country, in light of Alan Shatter’s recent calls that the government pursue a different approach, Charlie Flanagan could formally request the release of Halawa. Although it may not succeed, it would demonstrate Ireland’s commitment to the safeguarding of fundamental human rights. Alone Ireland may not secure the release of Ibrahim Halawa, but an official request for his release, similar to that of Australia for Greste, would certainly highlight his plight and encourage the mobilisation of more vocal support for his cause. Politics and diplomacy notwithstanding, this is a case of gross negation of human rights. The conditions alone in the Egyptian prisons are abhorrent, Ibrahim’s unjustifiable imprisonment even more so.

“you can’t keep calling for a fair trial, because they don’t exist”

Why is it, that Greste, someone who shared a cell with Halawa, enjoys freedom while Halawa continues to endure the confines of his prison cell? Why is it that a citizen of this country has largely been lost to the distant memory of many? Why has Ibrahim Halawa spent close to twenty months of his life a prisoner of conscience? Having recently interviewed Somaia Halawa, the older sister of Ibrahim, we begged the question whether she thinks Ibrahim’s ethnicity has hindered efforts to secure his release. Her response: candid and clear. Having never entertained such a thought until it was suggested to her personally by many Irish people themselves, she began to question the intentions and commitment of the Irish government. Somaia, during the interview, disclosed that a TD revealed to her in private communication that, had Ibrahim been white, the government would have approached his case differently: a harrowing indictment on Irish politics. The government’s recurring self-interest and prioritisation of trade links and economic benefits is objectionable. Questions arise thus: would the government shout louder if Ibrahim was instead called Michael? Would the Irish government petition the Egyptian government more assertively if Ibrahim was the son of an Irishman? Would the circumstances of Ibrahim’s life be different if he did not hold dual citizenship? One would prefer to answer ‘no’ to all of the above, however, this is somewhat difficult given the apparent lack of progress regarding his case.

Most worrying, however, is the apparent public disaffection towards Ibrahim’s situation. Comments on several articles (here and here) published on the Journal.ie reveal an unfortunate popular ignorance prevalent among the Irish public. Niamh Leahy, a contributor of one such misinformed comment, proposes the legitimacy of Ibrahim’s arrest and trial, claiming that he entered the country on an Egyptian passport. Colm O’Gorman, director of Amnesty International Ireland, amazingly spent significant time trying to put out the basic facts of the case to misinformed commenters. However, instead of a supportive consensus in his favour, his comments are met with an overwhelming animosity. Stating that Ibrahim did have an Irish passport, O’Gorman manages to accumulate 512 dislikes compared to just 167 likes. Rebuking more inaccurate hearsay, O’Gorman asserts that Ibrahim’s Irish passport was confiscated upon his arrest, thus acquiring a further 311 dislikes to 46 likes. Irish interest in attaining the truth about Ibrahim’s plight is questionable. When the director of Amnesty International Ireland is effectively accused of lying in a public forum, the Irish public’s true concern is undermined. If Ibrahim heralded from a devout Christian family, would the Irish public be more hesitant in accepting certain hearsay regarding the circumstances of Ibrahim’s arrest. It would not be so easy to qualify Ibrahim’s indefinite imprisonment by relating his parentage and dual citizenship to his predicament. Without such an option, the public would most probably be more pressing in attempting to force the government’s hand to secure his release.

If Ibrahim heralded from a devout Christian family, would the Irish public be more hesitant in accepting certain hearsay regarding the circumstances of Ibrahim’s arrest

Democracy is a valued element of our culture and political system in Ireland and many other western-liberal countries. Our support for such democracy is apparently conditional, however. In light of events in Egypt in the last few years, the violation of such democratic principles are evident. Instead of actively opposing the coup and consequential regime, the west has taken a passive approach to this negation of democratic principles. Somaia and her brother were protesting at a rally for the Muslim Brotherhood, a pro-democracy, pro-Muslim party. A party with wide support of the people of Egypt, it was usurped from power by a military coup (which has support of Egyptian Christian groups, more palatable to the West) last year, a violation of democracy in its grossest form. Many people in Ireland would virulently disagree with much of what the Muslim Brotherhood professes and practices when in power, however this does not authorise us to moralise on what democratic party people should support. It is no different than the many very large pro-democracy Christian right parties that have risen recently in Europe. All of these parties have many supporters who are not cast aside by their countries of birth just because society might not agree with some of those political beliefs. This paternalistic role notwithstanding, in which Ireland enjoys petitioning on behalf of the democratic rights of native Muslims (every Irish party has petitioned for the democratic rights of the largely Islamic Palestine), we have seen the forsaking of one of our own citizens, whose political sentiments might diverge from the preferences of the majority of his fellow countrymen.

Although Ibrahim is no longer being tortured physically, he still suffers under the mental strain of his confinement. Initially optimistic, he has lost much of his hope of a swift release having observed the release of Greste and Mohamed Fahmy, his mental state has been affected greatly. His recent open-letter addressed to the Irish government reveals his frustration. His government is not doing enough. In his opinion, they could be doing much more. Such opinion was elucidated in his open-letter. It is very difficult to accept the reality that Ibrahim is currently facing. In some ways it is easier to ignore the situation rather than face the harrowing reality that is so difficult to grasp or comprehend. Somaia revealed to us that ‘he just can’t take it anymore’. Our human tendency to distance ourselves from the plight of others is something we must combat. In our attempt to rationalise the struggles of others, we create an alterity, a situation of ‘us’ and ‘them’. The fact that Ibrahim is still imprisoned and receives minimal publicity in Irish publications is no less than appalling and reflects this reality.

Having led a life similar to many his age before his arrest, one wonders whether the differences between him and other Irish teenagers have been stressed to the extent that the insurmountable similarities are over emphasised, allowing us to detach from the situation. Sympathising with Ibrahim’s plight is not enough, we must take action to secure his freedom. There are certain actions being taken, the Irish Government has had representatives visit Ibrahim no fewer than 34 times according to Alan Shatter and Charlie Flanagan has called for a review of his case, however it’s in this time of review that as much pressure as possible must be place on the government.

“I think the most important thing is to make sure the government knows that people are supporting Ibrahim. Writing to Charlie Flanagan (Minister of Foreign Affairs) is very important”, Somaia says. Alternatively she suggests contact your local TD – any action showing public support for Ibrahim’s release is helpful. “The other important thing is engaging with the Egyptian embassy. They need to know that Irish people are so annoyed”. Support for Ibrahim’s facebook and twitter pages is crucial in organising public agitation and ensuring the government’s awareness of public discontent regarding Ibrahim’s unfair treatment. Finally attending protests is obviously one of the most powerful actions you can take to maintain public pressure.

For an in-depth interview with Somaia Halawa go to the University Times Magazine Interview published this week. Photo courtesy of Amnesty International