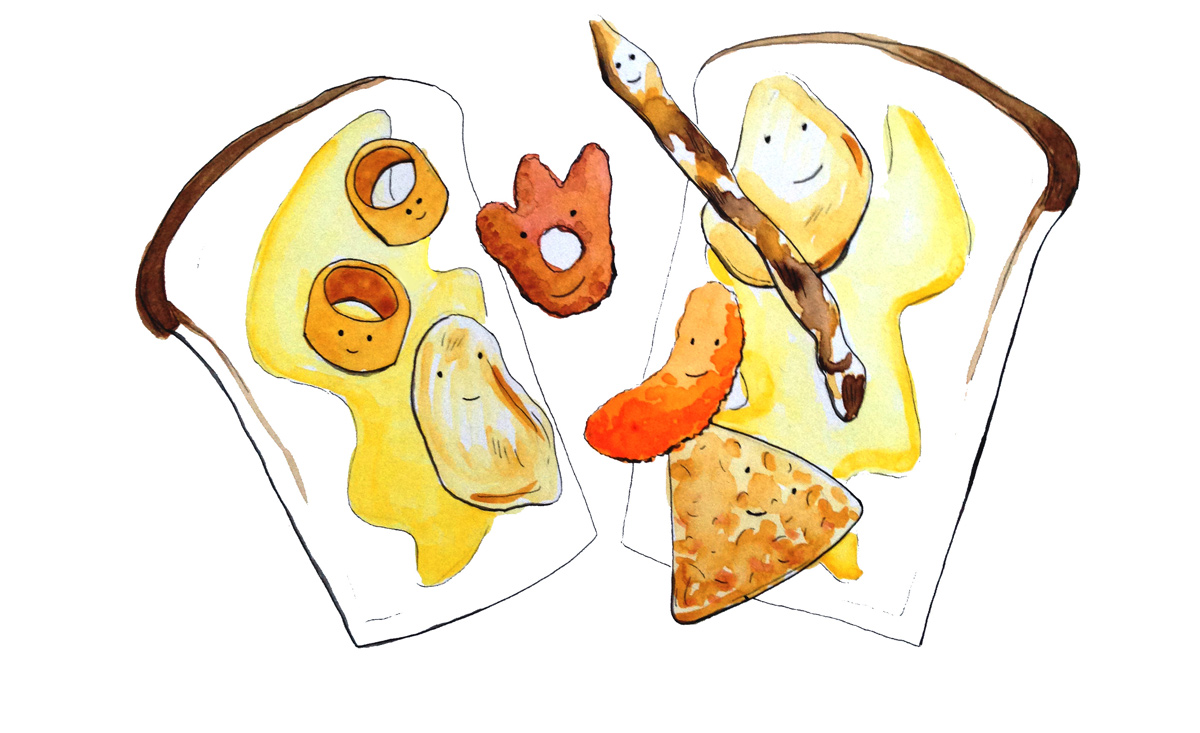 Let us discuss the humble sandwich. We shall begin with the invention of the sandwich, which is generally attributed to John Montagu, 4th Earl of Sandwich, in 1762. During a particularly prolonged stint of gambling, the Earl ordered a slice of beef to be placed between two slices of bread and brought to the table. Thus the sandwich and its accidental creator made their way into gastronomic history. Although the popularity of the sandwich is so great as to almost render this story redundant, its origin spreads even further than England. Contemporary food historians have speculated that it may have been inspired by Montagu’s visits to the Eastern Mediterranean where he saw grilled pita breads and small canapés served by the Greeks and Turks during their mezes, and copied the concept for its obvious convenience – a convenience that cannot be denied by the lovers of greasy rolls among us.

Depending on your choice that day, the contents of your sandwich can fill you with feelings of nostalgia, comradery or a sense of national pride, as well as the gratuitous amounts of cholesterol and later shame and regret. Take the humble chicken fillet roll for example: a staple feature of hungover student’s gastronomic repertoire. So essential is it to the healing process of a hungover body that I have been known to hide emergency roll money in secret locations of my bedroom before going out as not to spend it on the alcoholic beverages to be consumed that night.

So essential is it to the healing process of a hungover body that I have been known to hide emergency roll money in secret locations of my bedroom.

Owing to the practically medicinal properties of the humble roll, it’s difficult to believe that the chicken fillet roll is a purely Irish phenomenon. As I have sadly discovered on my travels, no other country, to my knowledge, has mastered the art of covering chicken in breadcrumbs, cooking the chicken in the breadcrumbs then adding various wilted salad items or cheese encased in yet more bread. I dare you to consume a chicken fillet roll without recalling how your friend spilt theirs with you in fifth year after you spent all your lunch money on lip gloss. The chicken fillet roll must shares a proud place in our travel party down memory lane. Ham sandwiches with lashings of butter filling lunch boxes from junior infants, Nutella sandwiches that gave you chocolate whiskers if you ate them too fast, bacon with brown sauce like your granny used to make and finally the crisp sandwich.

One person to have capitalised on this unique delicacy is Andrew McMenamin, owner of “The Wee Café” in Belfast. Upon rebranding the café as “Simply Crispy” its food sold out in under two hours, solely owing to its unique menu. Taking a satirical article by the website “The Ulster Fry” about the establishment of a cereal café in London to heart, McMenamin decided to cash in on the venture by opening Irelands first crisp sandwich café. “It is a school thing, people remember it from their school days, it is a classic and it is old-school” McMenamin stated in an interview with RTÉ News. “We are riding on the back of the publicity the cereal cafe got in London, if it helps us and Ulster Fry then it is a good thing” he added.

“We are riding on the back of the publicity the cereal cafe got in London, if it helps us and Ulster Fry then it is a good thing.”

The crisp sandwiches come in 35 different flavours with Tayto providing the bulk of the menu due to its wide variety of flavours and clear nostalgic value, but with Walkers also represented. The most popular choice of sandwich being the Belfast Bap with cheese and onion crisps. As one satisfied customer stated: “It is something from your childhood. I have not had a crisp sandwich since university and, before that childhood, so it is bringing back the nostalgia.” Thankfully, you too can experience the magic of the crisp sandwich. The Tayto pop-up café has come to Dublin, to Wicklow street to be exact, and will run until the 15th of March with all proceeds going to The Simon Community.

Besides the crisp sandwich, there are many strange food combinations which have entered into the public consciousness for better or for worse, largely thanks to students. As any young person living away from home for the first time will understand, necessity truly is the mother of invention. It didn’t take much to get a handful of students to reveal their most original food combinations, it seems that the odder the mix the more pride may be taken. Kelly, 19, admitted to having tomatoes and Greek yogurt for dinner. Other popular choices include your standard Koka noodle with a variety of toppings ranging from easy singles and ketchup to baked beans, sweet chilli sauce or three day old sausage. A typical student diet would, of course, not be complete without your standard pasta and all the imaginative possibilities it inspires. One English student elaborated: “I once made a pasta with black pudding, bacon and cottage cheese. It was quite good actually”. Joe, 20, commented that “I couldn’t decide between a potato or a toastie. So I made a potato toastie.” Genius.

Although many believe their own diet is nutritious, 90 per cent believe that students in general are not consuming a healthy, balanced diet.

While student menu innovation is an untapped national resource, a survey from the young person’s website Spunout.ie shows that perhaps our diet of beans on toast isn’t as nutritious as it seems. The survey results contained evidence of some positive eating habits, such as 56 per cent of students eating breakfast at least 6 mornings a week. However, there was much evidence of poor nutrition. Only 13 per cent of those polled eat their 5 a day, with 4 per cent confessing to never eating fruit or veg. 18 per cent admitted to eating takeaways 3-5 times a week, while 72 per cent eat ready meals and use ready-made sauces, which contain high amounts of salt and sugar, 1-3 times a week. The “fresher’s fifteen” may not a myth after all as the majority of students appear to have uneducated and uninterested views on nutrition. Although many believe their own diet is nutritious, 90 per cent believe that students in general are not consuming a healthy, balanced diet.

The concept of a crisp sandwich café opening may seem ludicrous and destined for a glorious but tragically short fifteen minutes of fame. However, we students have put worse things in our body and often neglect to eat anything at all for hours on end. So, a chicken fillet roll a day may not keep the doctor away, but at least it tastes fantastic.

Illustration by Carys Wright for The University Times