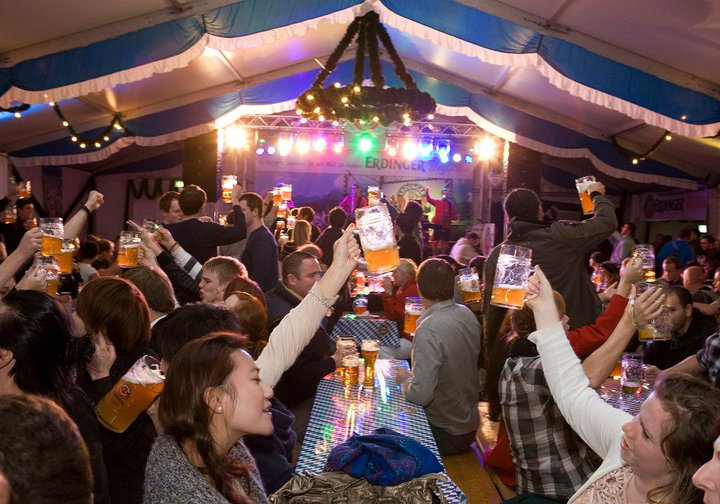 Even though we’re already feeling major summer blues with college on the horizon. We have the ultimate festival to lift your spirits. Oktoberfest is upon us again, which means eighteen days and nights of beer, food and music!
Oktoberfest is a huge part of Bavarian culture, and is the largest beer festival and travelling funfair in the world. It began in Munich in 1810, and has been held every year since. Oktoberfest Dublin runs daily from Thursday the 17th of September to Sunday the 4th of October. The festival is being held in Georges Dock at the IFSC Docklands, not too far from campus!
At Oktoberfest Dublin you can expect ice cold and fresh tapped German Erdinger ‘Fischer’s Hell’ and ‘Weizenbier’. For those of you not drinking, you can try the non-alcoholic wheat beer. If beer isn’t your thing, there will also be a German wine bar. A large beer which is 1L costs €12 and a small beer which is 0.5L costs €6.50. On your first beer you are required to pay a €5 deposit for your glass.
Moving on to the food, there will be lots of traditional German dishes for you to try. Some of the food at the festival this year includes Bratwurst (German sausage), Leberkas (German meatloaf), Haxn (Pork knuckle), Burgundian ham, Schmalzkuchen (German donuts) and the famous German pretzels.
The festival begins each day at 12pm, and goes on until after midnight most nights. If you want to keep drinking past 10pm, you have to buy a Germanic meal voucher which will cost you €6. €1 of this is donated to the Scoop Foundation and Movember.
As well as all of the German beer and food, there will also be entertainment! Oktoberfest is very much a social event aiming to get people together with friends or work colleagues. Entertainment begins in the evenings at 6pm with an in house band playing traditional German tunes and also classics that everyone will be able to sing along to!
So get yourself down to Oktoberfest to banish the back to college blues! Its free in, all you have to pay for is the beer and food.