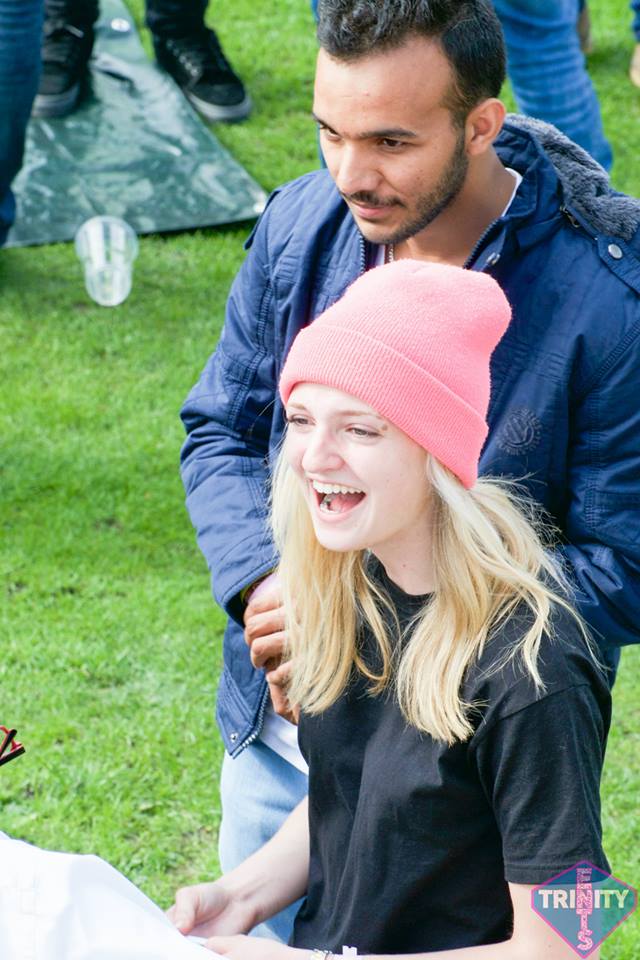 There’s a reason so many people know who Katie Cogan is. If you don’t know her now, that’ll soon change. From the bright pink hats her campaign team wore during the SU Elections to her inability to be more than ten metres from the centre of attention, it’s obvious Katie Cogan relishes being the face of Trinity Ents.

Walking into her office, I notice a large collection of gaudily coloured spray paint sitting in the corner. For some reason, I wouldn’t expect anything less. “It’s for our Freshers Week Fashion Show. We’re going to be doing stencilling onto T-Shirts with Fashion Soc and Vis-Art. There’s going to be a henna workshop, mood boards, and a fashion show”. It’s hard not to be excited.

It’s the effervescent, nearly unpredictable quality to Cogan that seems to make her the ideal candidate for Ents Officer. It seems as if she was born to organise that great ritual of alcohol, awkward mixing and general mayhem that acts as the gateway into College life for thousands of Freshers. “I don’t think I’ve been more excited for Freshers Week before. Come Monday, it’s my idea of heaven, organising all of the stuff”.

However, her own Fresher experience was as far from heaven as you can get. “Oh my god, it was the worst week of my life”. If you could make a list of all the bad things a Trinity student can experience during Freshers Week, it’s probably fair to say Katie ticked them all off. From the less than glorious baptism into Trinity Hall (“I had a really messed up weekend in Halls”), a Freshers Ball that ended up with “a bit of a cry” on a boyfriend’s shoulder, to a comically disastrous Friday night. “Someone stole my iPhone, and they actually uploaded a picture of themselves as my cover photo. So I didn’t have a phone, and I didn’t have any friends”.

Katie, though, is happy to remind people that during Freshers Week there is no such thing as being too extroverted. “Chat to everyone. If you have an excuse to talk to someone, or if you see any reason, just start chatting to them. No one’s going to say ‘Oh, you’re weird’. I’m a prime example. I go up to people all the time and just start talking for no apparent reason”.

There is some concern, however, that Ents events are too reliant on alcohol and club nights. Katie, taking me through the Ents lineup, defends it, arguing that there is enough plurality in the range of events to cater for non-drinkers and those who perhaps don’t feel comfortable in nightclub environments. “The Freshers Week Fashion Fest is super accessible, and is really hands on, creative and engaging. It’s the kind of thing we want you to come to with a friend, or someone you don’t know, and definitely bond with them and bond with other people”.

For someone who seems to fit so naturally into the Ents scene, Katie nearly didn’t run for Ents Officer, concerned that she didn’t fit the mould required to do the job that arguably engages the most students. “When I was first thinking about running for it, and I was kind of backing off, the first reason was because I thought ‘I’m not an Ents person’, and it was definitely to do with gender”. Trinity Ents has always, despite the best efforts to shake it off in recent years, been dogged by stereotypes of a laddish, macho culture. Indeed, even this year, Ents only has three females on a committee of thirteen people. Yet it’s not just Trinity Ents that suffers from this; for Katie, it’s the entertainment industry as a whole, “Loads of men in the Entertainment industry are horrifically creepy. I don’t have a problem saying that because I think the more you warn people about it, the more vocal you are about it, the less people will get away with it”.
But she’s confident that Trinity Ents at least, is evolving, “I don’t feel like there’s loads of masculine energy, and I wouldn’t let there be. Ew”.

One of the challenges an Ents Officer always faces is who they represent. Trinity is a biodiversity of interests, passions and people, and it’s always going to be difficult for an Ents committee to represent that. Katie acknowledges that this is an issue: “I wouldn’t say we’re at the stage where we’re representative of the whole college, but I’m constantly like, ‘What am I doing for these type of students?’”.

Indeed, while no one would question the value of Ents, it sometimes seems, especially during Freshers Week, that Ents events are constantly vying for attention with some of the larger societies that cater for more niche interests. Katie boldly reiterates the value of Ents, stating, “I’m here to represent the people who have a passion for fun. It’s sometimes difficult to define Ents, but it’s people who like to have fun”.

The problem with having a job centred around people having fun is that it can be difficult to leave a legacy as an Ents officer, given the ephemeral nature of nights out. When I put this to Katie, she considers it, concluding “Every Ents officer comes and does something completely different, and I don’t think that’s a bad thing, it’s actually a very good thing.” For Katie, her responsibility revolves solely around giving people a good time.

If at any point this year you stumble out of a nightclub somewhere in Dublin, or perhaps beyond, into the half light of early morning, elated by a Cogan night out, she’ll be happy. “I guess the legacy I’d like to leave is ‘That was really weird and fun’”.