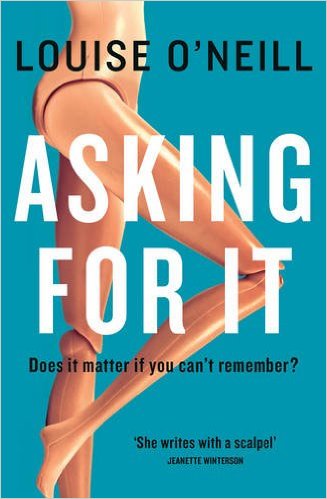 I stormed through this book in one sitting, unable to look away. The skill of the book is that it examines, almost unflinchingly, what happens to a young girl and those close to her after she is raped. You may imagine that this would be an uncomfortable read, and you would be correct. O’Neill takes her time in building up to the tragedy which dominates the novel, which is sensible as we become entrenched in the caustic and pressurised world of the rural Irish secondary school, so much so that the ensuing assault and its aftermath grabs us that much more. It is important to note that at the outset of the novel, the main character does not endear herself to us. It is only when her self-doubt begins to truly surface that we feel empathy for her.

The second half of the book is unsettling. O’Neill crafts a world that is very much changed. Emma is almost radioactive, with her family and friends affected in multiple ways by both the event and its devastating impact on her. Her depression and resulting numbness chills us and the few sympathetic characters who understand her predicament are unable to help her recover. There is no final neat tidying up of the issue, which is depressingly true to life. As we are told repeatedly, only 1 per cent of rape cases result in a conviction in Ireland, which is a horrifying statistic in itself. However, the real shock stems from the public’s perception of the protagonist and her predicament. Her particular torment intentionally echoes the Slane Girl and KPMG Girl incidents, and the truly upsetting exploration of the issue which the novel takes is to examine how instantly judged and reviled these individuals, predominantly women, can be. The various labels that Emma is given reverberate in her mind. Facebook comments and tweets ring in her ears. Several characters give the opinion that what happens to her is “not really rape”. You leave the book with a sick feeling in your stomach, but for me at least, I was made much more aware of how pressing the need is for our society to discuss consent, especially in our schools.

“Asking for It” is shockingly good literature. It brings to light a hugely important issue of our times and treats it intelligently, crafting a tragic tale which will stay with you, long after you race through its pages.