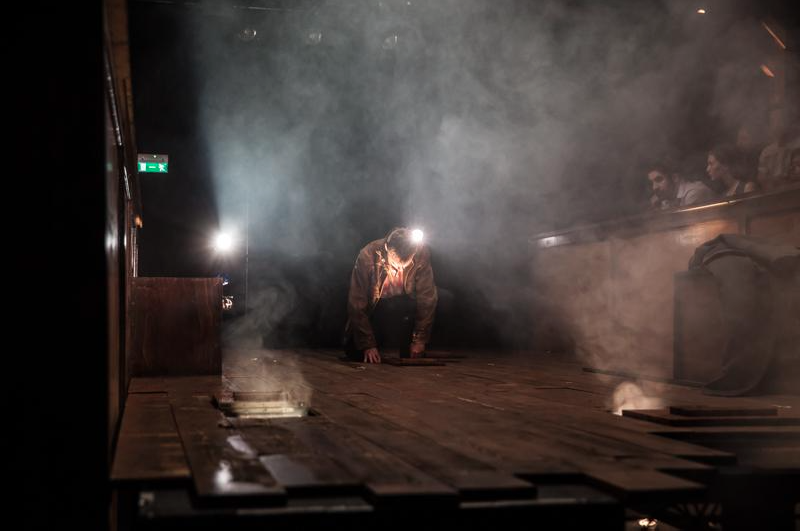 This week I had the privilege of interviewing Lee Samuel Wilson, theatre director and soon to be graduate of the Lir, Ireland’s National Academy of Dramatic Art at Trinity College Dublin. Just last year, Lee left his hometown in Canada to pursue an MFA in Theatre Directing at The Lir Academy of Dramatic Art. Although new to Ireland, Lee comes from extensive and impressive theatre background. Some of his recent works include The Who’s Tommy, where Lee assisted Des McAnuff, and The Tempest, starring Christopher Plummer at the Stratford Shakespeare festival, one of Canada’s biggest annual theatre festivals. Lee also interned during The Shaw Festival, another major Canadian theatre festival, and acted as resident director in the Birmingham Conservatory. Impressed by Lee’s prolific career across the pond, I asked him what made him want to leave, and more importantly, why Ireland? Lee explained how he had always admired work from Irish writers such as Shaw and Beckett and how he has remained “pulled” to the Irish writer. Quite beautifully put, Lee suggests that there is a sensibility found in the language of an Irish writer, one that is revered by Canadians. He insists: “Ireland is a little country, full of amazing artistic talent”. Lee is not mistaken. Ireland, once known as the land of saints and scholars, is home to some of the most well known names in theatre. From Brian Friel to Conor McPherson, artistic talent is an area in which we, quite frankly, excel.

I asked Lee to tell me about his knowledge of Irish theatre, prior to his arrival. Expecting him to tell me about how he had only ever heard of the Abbey or the Gaiety, I was surprised to hear him talk about the likes of Pan Pan and Druid. Pan Pan Theatre, founded by Gavin Quinn and Aedin Cosgrove, is fast becoming a leading name in Irish theatre. Verging on the experimental, Pan Pan aim to challenge theatrical conventions and present original theatre through different forms of expression. Although a household name within the Irish arts sphere, I was surprised to hear the extent of their work. Similarly, Druid, the first professional theatre company to be established outside of Dublin, has evidently left its mark across the pond. It goes to show exactly how much Ireland has to offer, on both a national and international scale.

However, it wasn’t until his arrival that Lee became aware of some of our smaller companies and theatres, such as The Project and Rough Magic. Now, after a year of studying in Ireland, these names are more than familiar to Lee. This is not only attributed to his intense year of theatre studies at the Lir, but his active involvement in theatre here in Dublin. This year Lee has worked alongside Annabelle Comyn on My Child, as part of his internal placement at the Lir. Annabelle is a well known director, whose recent work includes Dancing at Lughnasa at the Lyric Theatre and Mark O’Rowe’s Hedde Gabler. Working alongside theatre professionals, a perk of studying in the Lir, is something Lee mentions again and again. Lee says: “When you pay your school fees, you’re not just paying for an education, you’re paying for access [to these professionals]”.

What makes the Lir Academy of Dramatic Art the only one of its kind in Ireland is the quality of tutors and mentors. Unlike most universities, the Lir’s mentors aren’t necessarily academics, but theatre professionals. As an aspiring theatre practitioner you will learn more by working alongside someone like Annabelle than you would in any lecture hall. The Lir, often overlooked by the rest of Trinity due to its size and location near Grand Canal Dock, is home to some leading figures in Irish theatre. Considered a love child of Trinity and the Royal Academy of Dramatic Art, it has produced graduates in all areas of theatre including acting, playwriting, stage management, tech, design and directing. Most of these graduates have gone on to develop their careers and their place in Irish theatre. Lee compares the Lir to some of the big name universities in the states: “In America you hear Yale, Harvard, and soon enough, when talking about theatre in Ireland, you’ll hear Lir”. Upon graduating from The Lir, you leave with not only a degree but a calling card for those already established in the industry.

Another project in which Lee is currently working on is Arthur Miller’s A View From The Bridge, which is running in The Gate from September 8th until October 24th. Directed by Joe Dowling, the production also takes place as part of Dublin Theatre Festival. This is Lee’s first time as an active member of the festival. When asked for his two cents, he praised its sheer diversity. Lee goes on to say that not only does the Dublin Theatre Festival give him an opportunity to become familiar with Irish work but it produces “great artists from across Europe”. He also speaks highly of the Fringe Festival, stating: “It’s amazing. You have back to back festivals, from independent young artists to Ostermeier… Dublin isn’t a big city, not like London, but it has just as much to offer”.

Another big win for Lee this year was his MFA showcase East of Berlin, a play by Hannah Moscovitch. As part of the MFA in Directing, it is required that each student directs a full production to which industry professionals are invited to attend, as well as members of the public. Lee’s production was a massive hit and has since been picked up by the Project Arts Centre for a full professional production. It is very rare that a student production is picked up so soon, if at all, so this is a major accomplishment for Lee. It also marks his first professional production here in Ireland, and is scheduled to take place sometime in early January. Naturally I wondered if Lee plans on returning to Canada after the run. I inquired about his plans in general: has he got all he can from Ireland, or does he want to continue to work here? Lee expressed his desire to stay put for the time being. Although he has some projects up his sleeve back home in Canada, he wants to stay and work here in the hope of building that bridge between Irish and Canadian theatre: “The dream is to work in both places and establish that link. I want to make more connections too, in the hope that maybe one day I can call up someone here and say, ‘hey, we’re looking to premiere some Irish work here in Canada’.” I think it’s fair to say that if Lee continues with what he’s doing, that bridge will be built in no time.

“Dublin isn’t a big city, not like London, but it has just as much to offer”

I was blown away by how much Lee has established himself in the industry over the last year, so much so that I asked him what his secret was. I asked him, as an artist beginning from scratch in somewhere new, how he found it, and what would he say to others who are trying to establish themselves in the Irish theatre scene. Quite simply, Lee echoes the importance of putting on your work wherever you can: “If I didn’t have the Lir, I would have paved the pavement in the hope that someone will see my work and take a chance on me… you have to get your work out there, you have to do things like Fringe and collaborate.” Lee goes on to say: You could have a great CV, you could have excelled in McDonalds, but that doesn’t matter in theatre, people need to see your work”. Theatre is completely practical, whether or not you’re a Lir graduate. If you’re not active, you’re not seen. And, if you’re not seen, you’re not known.

Lee Wilson is definitely one to watch, I have every confidence that we will witness big things from him in the next year. Until then, look out for East of Berlin, coming to The Project Arts Centre.