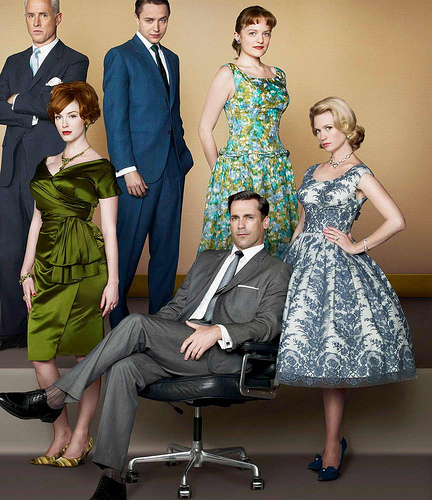 The seventh and final series of the AMC hit Mad Men has drawn to a close and the emotional turmoil of loyal viewers has finally abated. The world can now begin to slowly untangle itself from the plot line of the American period drama and truly appreciate the show on an aesthetic level.

Since the show premiered in July 2007, its historical authenticity and seamless elegance have ignited a public love affair with all things 60’s. In particular the Mad Men series has caused seismic changes in the fashion industry, bringing all that is vintage-inspired into contemporary demand. The show’s far-reaching fashion influence is undoubtedly the result of the involvement of talented costume designer, Janie Bryant. Despite the fact that themes of alienation, callousness and social conformity feature in the show, Bryant’s sartorial creations shine through. With such an accomplished group of designers at hand, it is no surprise that the show has received four Emmy nominations for their incredible costume design.

Throughout the running of the show, we witnessed the immense fashion impact of Mad Men. The versatile style effortlessly flowed from the small screen to the catwalks, into shopping boutiques and private wardrobes. Essence of the classic 60’s design sprinkled the 2008 runways. Michael Kors’ fall 2008 show was laced with 60’s trend items, with pencil skirts, pointed high-heels, demure cocktail frocks, and cat-eye frames standing out in the women’s line. Meanwhile, chunky cardigans, skinny suits and skinny ties were the 60’s staples which featured prominently in the men’s ready-to-wear line.

As the Mad Men series continued to thrive, fashion labels soon realized the popularity of the chic and opulent 60’s themed clothing and took advantage of this niche. In 2011, Banana Republic launched the first ever Mad Men inspired collection in collaboration with AMC, show producers and Bryant. This limited edition line targeted both men and women and featured almost sixty-five pieces of apparel and accessories.

After Season 5 peaked with 3.5 million people viewing the premiere alone, the classic 60s fashions illustrated on Mad Men further infiltrated runways. Prada’s fall 2013 menswear show contained an array of 60s inspired dress, so much so that Dennis Tang, an assistant editor at GQ magazine, referred to the show as “Miuccia’s Mad Men”. The show demonstrated chic 60s menswear at its finest, with finely tailored trousers, billowy shirts, roomy overcoats and thick framed glasses. The classic subdued nature of the 60s fashion was given a contemporary twist with injections of articles of a bright block coloured nature.

The magnitude of Mad Men’s fashion influence is evident in the increase of 60s inspired collections throughout the lifetime of the show. Although the critically acclaimed series is drawing to an end, the impact it has had in fashion circles will survive for years to come.