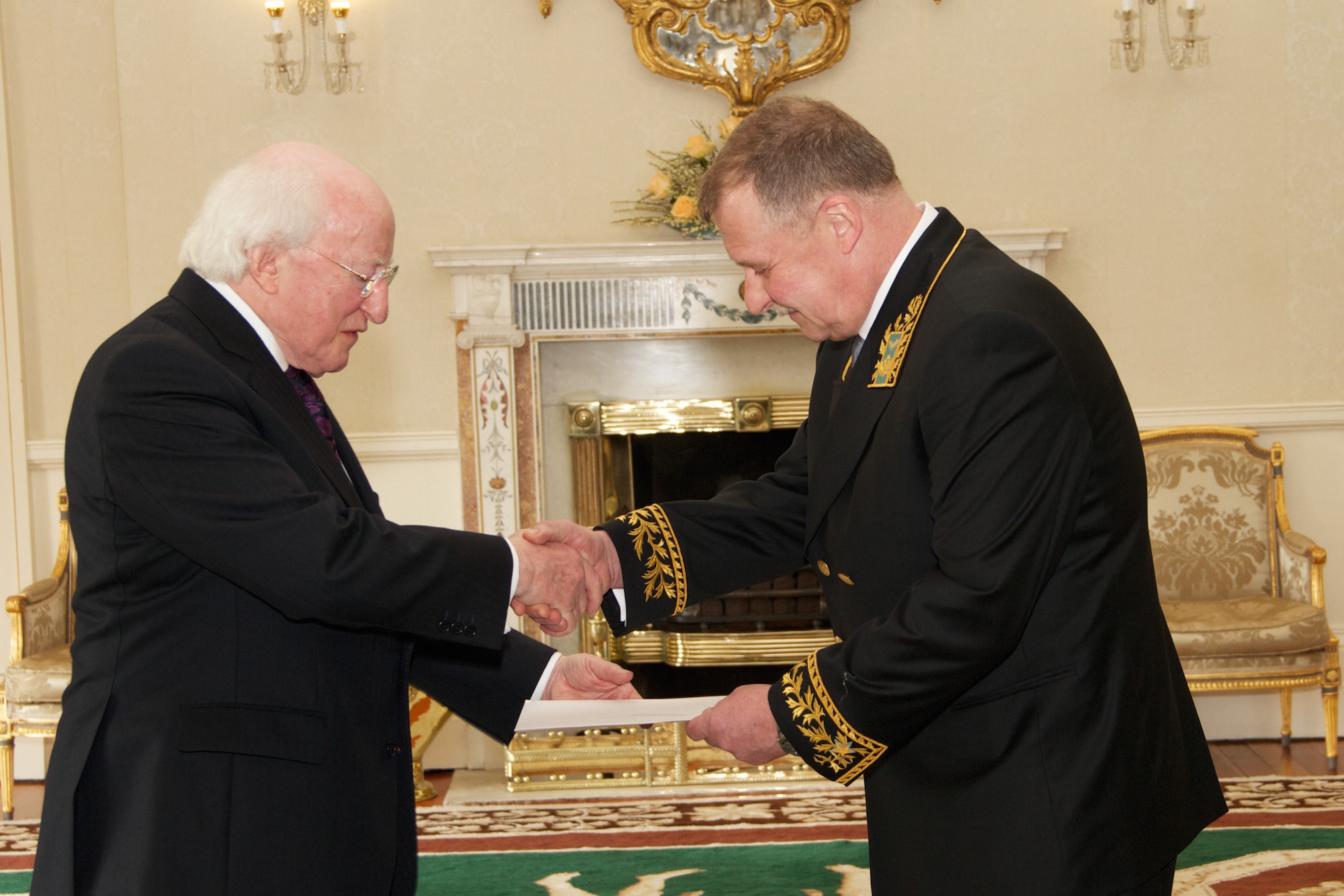 The Russian ambassador to Ireland took part in a Q&A session with Trinity students last night, hosted by the Society for International Affairs (SOFIA).

The talk, which covered many of the controversial and topical issues surrounding Russian foreign and domestic policy, took place in the near-capacity Davis Theatre, in which His Excellency Mr. Maxim Peshkov gave a brief address followed by a lengthy Q&A session.

Mr. Peshkov, who has been the Russian ambassador for the last three and a half years and was once a translator for the former Soviet premier Mikhail Gorbachev, visited Trinity along with Mr. Artur Pankov, Chief of Protocol, and his personal assistant, and Mr. Vasily Velichkin, Second Secretary of the Embassy.

In Peshkov’s short speech, he drew close attention to the “economic, trade and cultural similarities” between Ireland and Russia and mentioned how Ireland is the “seventh biggest investor in [the Russian] economy”. However, he noted how the economic sanctions imposed on Russia since the Crimean crisis have detrimentally impacted not only Irish trade with Russia, but European and world trade as well, saying that these sanctions “bring no happiness to anyone,” except the United States who, according to Mr. Peshkov, are “more concerned with their own pockets than with others.”

In Peshkov’s short speech, he drew close attention to the “economic, trade and cultural similarities” between Ireland and Russia.

After speaking for a short time about recent commercial agreements between Russian and Irish companies as well as touching on how each country’s culture is appreciated in the other respective country, Mr. Peshkov began fielding questions from SOFIA members directly. Throughout the evening, Peshkov repeatedly stressed the “pragmatic” approach Russia takes to international diplomacy, travelling from post-WWII Europe, through the dissolution of the USSR and right up to the present day. When asked to express his views on whether or not the E.U. poses any current or future threat to Russia, Mr. Peshkov said that attitudes towards Russia amongst E.U. countries change in cycles from “a very tough attitude towards Russia” to one of “understanding” on a regular basis, adding that at the moment, he thinks that we are “somewhere in the middle”.

When asked about Russia’s role in Syria, Mr. Peshkov declared that Russia has been “criticised by a wave of hatred” over accusations that it has bombed what he called “middle-terrorists” as well as ISIS in its airstrikes. He clarified that Russia had “several times” contacted her “American friends”, asking if they had bombed positions held by anti-ISIS fighters and sought out where they should bomb, but had received “no answer”. Later in the evening, the ambassador also spoke of the “fruitful cooperation” between the American and Russian ministers of defence over the “exchange of information” regarding Syrian airspace and military structures, but again stressed that there has been “no cooperation at all” from Washington in relation to the targets that Russia has been hitting.

An audience member asked Mr. Peshkov if the recent passing of the marriage equality referendum had impacted his work in Ireland, considering what the audience member referred to as the “stark differences” between Irish and Russian attitudes. Peshkov stated that the matter was “your choice, not ours”. However, he also expressed that Russia does not want to be taught how to act on the matter by anyone, including Ireland, stating: “We don’t teach you and we don’t want anybody to teach us how to live”.

Peshkov was firm in deflecting blame from Russia for the crisis in Ukraine.

Peshkov was then asked whether the passing of the referendum in May had played any role in the further delaying of the child-adoption agreement between Ireland and Russia, which has been in formation for the last number of years. Regarding that, Mr. Peshkov said that the key issue was not that of the marriage referendum, but Russian laws regarding so-called “post-adoption reports” by the new adoptive parents.

He added that the latest Russian draft of the agreement was sent to the office of the Irish Minister of Youth last August, but no feedback had been received on the matter. However, Mr. Peshkov did mention that because the final decision on prospective adoptions of Russian children by Irish parents are based on “Russian laws in Russian courts” and since Russian laws do not permit same-sex marriage, same-sex couples in Ireland would not be able to adopt Russian children.

Peshkov was firm however, in deflecting blame from Russia for the crisis in Ukraine: “Don’t try to blame us,” adding that the Ukrainian “coup d’état” had created “an explosion of nationalistic and lazy emotions in (the Ukraine).” When pressed on the issue of the Russian intervention in Crimea, Mr. Peshkov said that there had been no invasion, assuring the room that Russia “didn’t send one additional soldier” to Crimea and that the issue boiled down to “an expression of the will of the Crimean people for self-determination.”

Mr. Peshkov was then asked about Russo-American relations, with the diplomat saying that they were “different”. Going further, he claimed that American attitude towards Russia balanced on the “pre-electoral feelings of the American elite.” He described the relationship between the two countries as “not being friends,” but “not tough enemies”. He drew attention to each country’s acceptance of each other’s economic areas of dominance, with a common will to find points of mutual interest to build from.