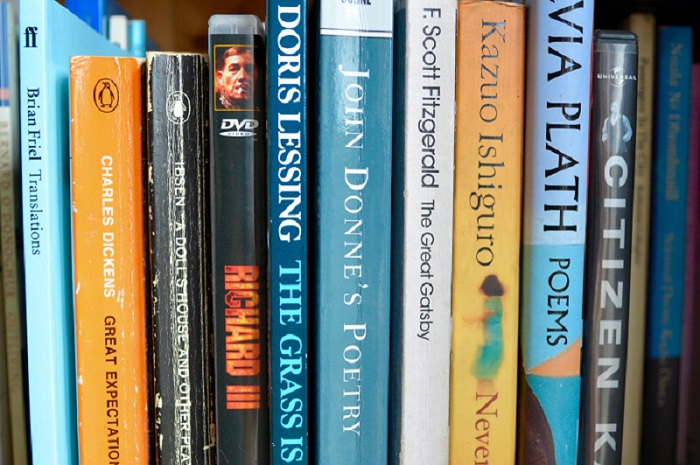 For students currently enrolled in Trinity College, news of Junior Certificate English curriculum reforms will cause little debate. Often considered little more than a testing ground for a student’s organisation and time management skills, the Junior Cert is quickly forgotten with the onset of the Leaving Certificate. After all, it is the Leaving Cert that determines where you might study, work or even live so, the focus on it is not unjust. However, with 60,000 students having sat the Junior Cert this year alone before moving onto the long trial of college applications, their course material is of great importance. What you study between the ages of 12-15 can have an indelible impact on the direction of study, particularly in the study of English literature. These are still formative years, and ought to be treated as such when designing a curriculum.

The National Council for Curriculum and Assessment introduced the revised Junior Cert curriculum last year, with a plan to phase it in gradually. The curriculum, which will be taught from 2014-2019, is noticeably different from the Leaving Cert curriculum in its focus on popular contemporary literature, featuring writers such as Eoin Colfer and Roddy Doyle. While to some this may seem like pandering to popular demand, Head of the School of English, Professor Chris Morash, sees it as a positive. Sitting down with The University Times, he says that what is often forgotten both at second and third level is the issue of readability, and that popular novels allow younger readers to access works.

An issue that can carry over into Leaving Cert preparation, and even into third level, is that of what Morash calls “the intrinsic difficulty of a lot of great literature.” Veterans of the Leaving Cert will know that it can take a year to work through a single Shakespearean play, hindering any attempts at greater critical analysis. Morash recalls how during his time teaching Media Studies in Maynooth there was no such problem: “I found that you could jump to very sophisticated theoretical models very quickly because anyone could read a television show.”

The value of popular novels in English Studies is a heavily-debated topic in third level institutions. Regardless of the view a student of English may take on the matter, an early introduction to studying popular literature in an academic sense is a definite positive. As a Director of the M. Phil in Popular Literature, Dr Bernice Murphy, is accustomed to defending the validity of popular novels in third level and sees the benefit of studying it at an earlier age. She says over email: “There’s plenty of room on reading lists for both Harper Lee and John Green.” Green’s novel, The Fault in Our Stars, which features on the Leaving Cert curriculum, is a young adult bestseller and has influenced the course of young adult fiction in its enormous success. Murphy says that its impact on millions of young readers “makes it a worthy candidate for academic scrutiny.”

Morash feels that the onus is on the literary educators of the country to also “create the audiences of the future.”

It is not surprising that both the Junior and Leaving Cert English curriculums have a keen emphasis on Irish works. What is somewhat interesting, however, is the prevalence of writers on the Junior Cert course that also feature on third level courses, such as Seán O’Casey. Young students would appear to be getting a head start in Ireland’s rich literary heritage, an advantage that would no doubt carry forward into third level English Studies. While he acknowledges that an awareness of our cultural heritage is worthy in itself, Morash – who is also the Seamus Heaney Professor of Irish Writing – feels that the onus is on the literary educators of the country to also “create the audiences of the future.” In this sense, the decision to feature such prominent Irish writers on second level English curriculums appears a highly conscientious move.

The improvements to the Junior Cert English curriculum would suggest an effort made to make it a more pleasurable aspect of education. But, as always in state assessment, there must be give and take and, with the onset of the Leaving Cert, such aspirations are somewhat dashed in favour of pursuing points. Associate Professor of English, Professor Aileen Douglas, reiterates this: “The idea of having personal literacy, social literacy and cultural literacy is all very laudable but as people go on through the cycle they become more aware of the end results and points, which can exert a terrible stranglehold.”

Students at third level are greatly hindered by the attitudes the Leaving Cert promotes, especially in the teaching of English. In second level a great deal of time is devoted to a small number of texts whereas in third level students must read multiple novels, plays and poems a week and must be able to develop opinions informed by critical reading. Douglas asserts that this is where most students struggle: “They arrive at third level and they’re overwhelmed. They can’t cope with the reading and that makes them apprehensive and anxious.” At this point the learning experience of the Leaving Cert is little more than a hangover that spoils the enjoyment of English literature.

Efforts are made by the School of English to make the transition from second level to third as easy as possible and this often involves undoing the indoctrination of the Leaving Cert. Morash’s method is perhaps the most theatrical. His fresher orientation classes open with a presentation slide reading “Everything you know is wrong,” possibly throwing idealistic young English students in the proverbial deep end. However dramatic this may appear, it makes an essential point – the skills employed by students to get into this course will not get them through it. From making critical analysis a normal part of your work to discarding purely subjective responses to a poem, the third level English student must recalibrate what she feels is the correct way to study a work. Trinity’s advocation for small group teaching is central to this. While it is an expensive learning model it allows a student a platform in which to air and develop opinions with tutors and classmates.

The assumption that studying English is a simple endeavour is one that has permeated through our society, promoted by the idea that students are “just reading books.” Indeed, it is a misconception that the Leaving Cert and its reliance on rote learning can further. More harmful is the stereotype that it is a woman’s subject, established by the history of women being more voracious readers than men and cemented by the gender balance tipping in the favour of girls in English classes. Murphy acknowledges that in majority English classes will tend to have more women than men, and suggests that a reason for this may be that men are “discouraged from considering English as a valid area of academic study early on in their education,” but asserts that in exams and in-class debates both genders are equally skilled.

When asked if the Junior and Leaving Certs have any positives that carry forward into university, all academics interviewed agreed that there is merit in exams, even flawed ones. While they have obvious benefits in how they develop a student’s work ethic and ability to form arguments, the strength of state examinations lie in how they bring a sense of seriousness to education. As Morash says: “What it does tell every student that sits the Leaving Cert is that what you’re doing is important.” In a subject like English, such reassurance is welcomed – you would be hard-pushed to find an English undergraduate who has not spent at least one pathetic coffee break lamenting their decision to study Márquez over mechanical engineering.

It appears that Irish education is caught in a vicious circle of curriculums catering to admissions standards that could be changed by the universities themselves.

Reforms to the Junior and Leaving Cert curriculums are largely seen as positives as the assumption is that any reform is, by design, an improvement, and will enable more students to access university. But such moves fail to acknowledge that assessment informs curriculum, and thus a change to reading lists is undone by an ineffective exam format. Trinity’s School of English operates on the belief that pedagogy should shape assessment, having two years ago done away with a university guideline on the amount of essays there should be against exams. For this reason assessment in English modules can differ. With the reforms, the Junior Cert English course has been changed to include an oral assessment and a collection of a student’s work, but the Leaving Cert remains the same. As Morash says: “If, at the end of the day assessment is one big exam, the only parts of the curriculum that will have any force under reform are those that relate to the exam.”

It is similarly misguided to criticise the Junior and Leaving Certs as the main flaw in our education system, as the problem lies in our admissions model to university rather than in the assessment. The CAO was established in 1976 by a number of Irish universities and is currently controlled by these universities and other Higher Education Institutions. Considering this, it appears that Irish education is caught in a vicious circle of curriculums catering to admissions standards that could be changed by the universities themselves. What is more worrisome is the amount of third level educators who refuse to understand the second level exam systems that their students arrive out of, or simply don’t bother.

The belief that the secondary cycle is irrelevant upon entering college is a dangerous one, but it is one that is by no means limited to just students. In the debates that rage on the subject, the voice of the university is not heard as loudly as it should be. The assessment models of our system should not be obstacles to merely leap-frog over but be points of development that feed into each other. Just as a third level English course is cumulative, so should state examinations be, and picking on one element like the Junior Cert will get us nowhere fast.