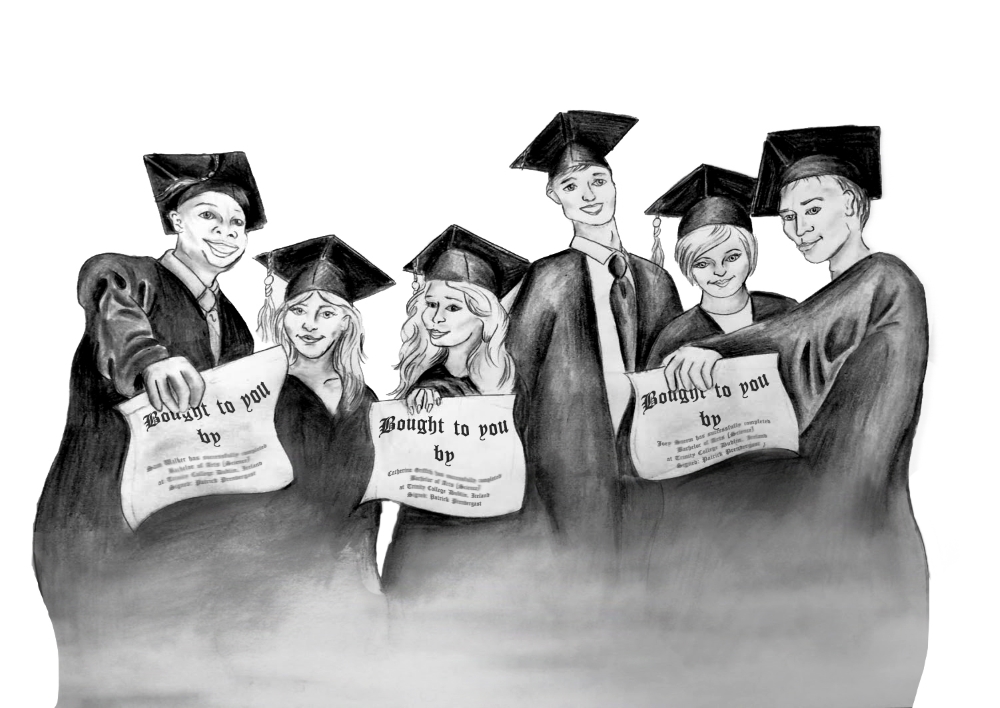 Illustration by Laura Finnegan for The University Times

While ensuring prudent budgetary expenditure is essential to the running of College, so too is adequate funding. At a time when students already pay fees, and look set to pay more under proposed student loan schemes, we must strive to safeguard educational standards in our universities.

What is unacceptable then is the current situation of removing modules, such that students are not being offered the degrees that they have signed up for. We saw this last year in Trinity’s Geography Department, where an acute lack of funding led to the department no longer being able to offer anywhere near a full range of geography modules. More recently, my own department, French, has suffered due to a lack of College funding. The department’s Linguistics module is available to senior freshman and all sophister students, and has consistently attracted high numbers thanks to its focus on the significance of language usage in society. Linguistics is studied by 71 per cent of Senior Freshman students, 66 per cent of Junior Sophisters, and an incredible 85 per cent of Senior Sophisters. However, the module is taught by Dr. Rachel Hoare, who is the head of the French Department and the only member of staff who can teach Linguistics. Given that Dr. Hoare is taking research leave in Hilary Term 2017, she won’t be available to teach the module throughout the year and to supervise final year dissertations. The department indicated that it would not be able to hire a temporary replacement, citing a lack of funding. The issue is that College doesn’t have the resources to pay for staff to be on research leave and also to pay someone to cover their classes, with the exception of covering staff on maternity leave.

For a university to succeed it must promote its academic research, but also excel educationally and have a good standard of teaching.

This renders our education precarious. It’s highly worrying that the modules that you are currently studying could be suddenly withdrawn because an academic decides to conduct research in their field of study – an essential part of their work. Academics can’t be discouraged from researching when academia is based on its findings. For a university to succeed it must promote its academic research, but also excel educationally and have a good standard of teaching. One shouldn’t come at the expense of the other. In fact, these two goals are mutually beneficial: a university renowned for the quality of its published teaching staff will in turn offer a better standard of teaching. And so, while Trinity benefits from its academics taking research leave, it suffers educationally if this means the removal of previously-offered modules.

What we need in the face of these problems is a refusal by students to accept these structural shortcomings. The Linguistics issue is symptomatic of a wider funding issue in Trinity, which is not the fault of the College, but rather stems from the dismissive attitude towards funding higher education in this country. Problems are seen across the board as a result. The department of my other subject, Philosophy, has undergone major staff cutbacks since my time in first year and has been hiring junior academics on temporary, low-paid contracts, rendering the teaching situation uncertain. As disappointing as that is, at least the modules are being offered to students. Many of my classmates in French have considered taking a year out, deferring final year until Dr. Hoare has returned from research leave. This is not an option that students of Trinity should be forced to consider. Many of us have taken Linguistics since second year on the understanding that it will be available until fourth year. If we can’t sit that module, however, all we have is Politics or Literature, which many of us have never taken and which would be a leap into the unknown in a year that is vitally important for our degree.

However, this is not the fault of College, which does its best to allocate funds for teaching staff.

In response to this, our class took the issue to College authorities in an attempt to secure an allocation of funding. By creating enough of a stir we have since worked an agreement with the School of Languages such that there will be a Linguistics module offered. In spite of our success, a separate module on cinema, which is offered by Professor Alyn Stacey, will not be offered, as she is also going on research leave. While this module attracts fewer students, there are still those who wish to take it and who are now deprived of that choice. This is being replicated across College insofar as individual departments are not allocated additional funding beyond their basic teaching expenditure, which does not account for supplemental hiring.

However, this is not the fault of College, which does its best to allocate funds for teaching staff. Money is not being given by the government to support higher education. Universities are not receiving sufficient funds to continue with the degrees they offer, and it’s the students who suffer. No student should have to delay their degree through no fault of their own because of funding issues. Too often “funding issues” is bandied about to explain failings, a lazy excuse for the government not doing its job properly and not helping universities in the provision of degrees.