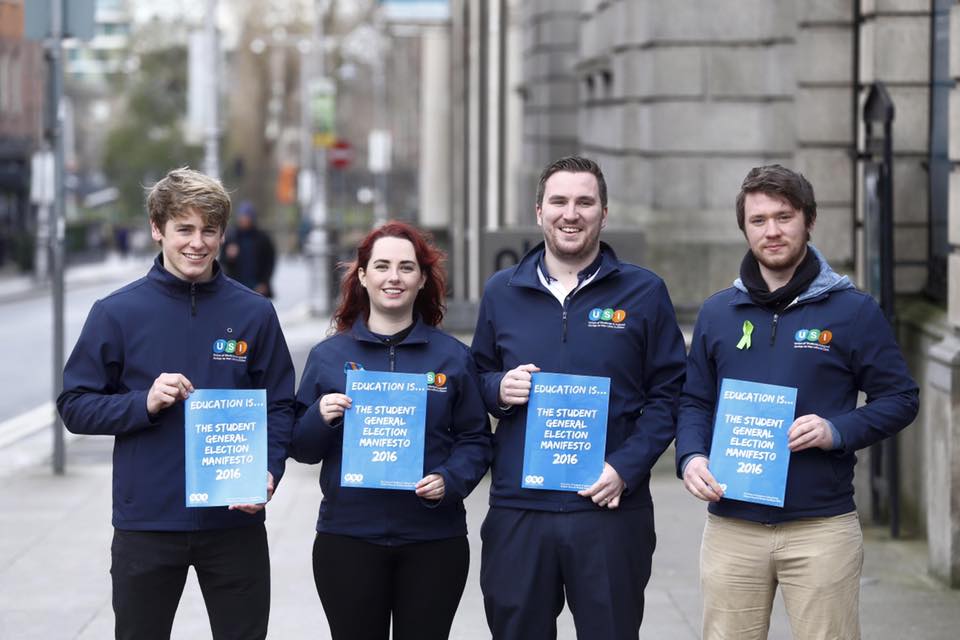 This week, the Union of Students in Ireland (USI) released their manifesto for the upcoming general election. You can find the full text of that document here. The ideas therein are as cohesive as they are comprehensive, presenting a vision of a society that would broadly appeal to most young people in Ireland. It reflects a lot of the very impressive, very technically detailed work that went into its writing and and research.

In a practical sense, though, the document acts more as a strategic tool in the election than as a policy guideline for the next government. I’ll outline some of the main proposals below – and there are definitely a good few more worth looking at if you’re interested in such things. But the real message here is that the document itself is more important than the sum of its parts.

For third-level education funding, USI calls on the next government to reject fee increases and/or the introduction of an income-contingent loan scheme, while increasing the maintenance grant to match the rising non-fee cost of living for students. USI President Kevin Donoghue frames the fee issue correctly in his introduction: “Education… is not just a right but key to economic growth.” Ireland benefits from a highly educated young workforce that attracts foreign direct investment, creating spillover benefits in the form of higher wages and opportunities for other workers. This will be the key message for USI to carry into the general election. Students are not asking for charity when they protest fees, loan schemes, and grant cuts. USI is reminding politicians and society that education funding is an investment that generates real socioeconomic returns, not a money pit of entitlement.

Students are not asking for charity when they protest fees, loan schemes, and grant cuts.

Proposals for the accommodation crisis are all student-specific, including the short-term conversion of NAMA-owned properties into student housing. This approach curiously ignores the broader effects of the accommodation shortage and rising rents, most notably on recent graduates and low-income families. Some of these issues are indirectly addressed by the current government’s “Construction 2020” strategy, to which this manifesto makes reference and which aims to create a sustainable framework for construction, property development, and community planning. Kickstarting the construction sector should – but may not necessarily or sufficiently – address stagnant housing supply. But unless purpose-built accommodation becomes sufficient to house all students, which seems unlikely if not impossible, USI would ideally incorporate into their proposal some broader stance on the national housing shortage.

The manifesto proposes a number of changes that would affect employment for students and young people. The infamous JobBridge scheme would be abolished, “in favour of a system that enhances the experience of participants, improves quality and increases progression into secure and sustainable employment”. These words don’t exactly translate into specific solutions for flaws in the current system, including insufficient payment and the crowding out of full-time entry-level jobs, but they at least convey the widespread discontent felt by students. USI also urges the next government to amend employment legislation to mitigate the harms of zero-hour and non-guaranteed contracts, and to take “decisive action” to ensure that academic staff are afforded the necessary pay and contract lengths for viable employment. The quality of academic contracts indirectly benefits students by attracting and retaining quality teaching staff, and directly does so by creating viable employment for postgraduates and aspiring lecturers.

Social issues account for much of the rest of the text. Many of these causes have widespread support among students, including drug decriminalisation akin to that in Portugal, a rationalisation of the lifetime ban on MSM blood donation, and strong efforts to curb sexual violence and support mental health. As a quick and interesting side note, the word “alcohol” does not appear anywhere in this text. This seems a glaring omission given not only the problems that drinking can cause for young people (and indeed people in general), but specifically the well-documented ways that the nation’s binge-drinking culture interacts with the sexual violence and mental health stigmas that young people rightly and vocally condemn. Proactive solutions like minimum pricing for alcohol, as unwelcome as they may be, at least warrant some form of consideration and/or rejection in such an otherwise comprehensive policy document.

Somewhat more controversially, USI comes out firmly in support of repealing the eighth amendment of Bunreacht na hÉireann, along with the Protection of Life During Pregnancy Act 2013. The latter would be replaced with laws that “ensure safe and legal access to abortion, at a minimum, in cases of rape, incest, risk to health or severe and fatal foetal impairment”. Pro-choice campaigns have not faced the same near-universal support among young people that marriage equality evoked last year, but students will undoubtedly be among the movement’s most vocal supporters.

USI can only trade what it has to offer, which these days is the voting power of a chronically under-engaged generation.

Many of us would be happy if half the ideas in this proposal were considered, never mind all of them. They are each, individually, changes that USI feels will benefit students, but hardly ones that will come easily in the next few years. Instead, the aggregation of these proposals more accurately represents the price of the student vote. Politicians and their parties will need to understand, absorb, and authentically convey the concerns of young people. Donoghue is again on point when he writes: “Young people and students are not interested in political point-scoring and the tit-for-tat remarks that dominate our political conversations.” They want to be listened to and they want solutions.

The caveat to all this is that politicians will only listen to young voices if they believe those young voices will vote. Among the many demographics and special interests competing for attention (and ultimately policy action), USI does not stand out as a traditional power. That’s because it can only trade what it has to offer, which these days is the voting power of a chronically under-engaged generation.

Student leaders will need to find an issue that actually gets young people to the polls. From the passion stirred up in the past few months, higher education funding seems to most aptly fit that bill. Fee increases and loan schemes provide a convenient bogeyman to rally against, but the next step toward credibility will be fleshing out our vision of what we actually want. Free fees come at a price. What should society give up? Which taxes need to be raised? How do we make the numbers work? USI does not quite reach that far in its manifesto, but it does an admirable job of showing that students have meaningful contributions to make on the national political stage.