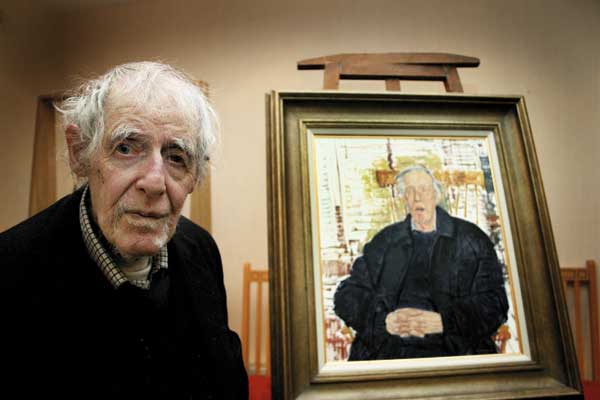 Trinity College Dublin has never had a shortage of deeply impressive people who devote their entire lives and careers to the university. Yet, if you studied here between World War II and 2007, you almost certainly would have been aware of one man: RB McDowell, a history professor here who was not only one of Ireland’s greatest researchers, but an eccentric character whose presence left a marked impact on student life for his entire, exceptionally long, career.

Born in 1913 in Belfast, he attended the Royal Belfast Academical Institution, before coming to Trinity for an undergraduate degree in History. McDowell began teaching in Trinity at the end of the Second World War, and continued to live here in college more or less continuously until 2007. A gifted researcher, McDowell vastly expanded our knowledge of Irish history, worked tirelessly his entire life, and deeply loved our college. One could always find him scuttling around, nonsensically talking to himself. He was also exceptionally well-known by students, with a double-sided reputation. He was at once both loved and feared. Yet, he defined the age of Trinity he was in, and for some it was difficult to imagine Trinity without him.

Speaking to The University Times, Professor David Dickson, who was taught by McDowell, reflected upon the latter’s achievements. Academically, McDowell’s focus was on 18th-century Ireland. He specialised in politics in particular, and was a famed researcher. According to Dickson, McDowell was one of the leading international scholars working on the life of Edmund Burke – he edited numerous letters of Burke and wrote on other aspects of his career. But perhaps his last great work was in editing the three-volume Works of Theobald Wolfe Tone, with the last only being published in 2007, when McDowell was 93.

One could always find him scuttling around, nonsensically talking to himself. He was exceptionally well-known by students, with a double-sided reputation. He was at once both loved and feared.

McDowell’s life-long research on 18th-century Ireland came at a time when virtually no one else was focusing on the area. The sheer scale of his output astounded all those who worked alongside him. He was known for regularly working 12-hour days, focusing sometimes on tiny and seemingly insignificant shards of information. For his PhD, (completed in only two years), Dickson recalled, McDowell analyzed up to a thousand Irish political pamphlets published in the 18th-century with a speed, comprehensiveness and thoroughness which, before the digital age, was an extraordinary achievement. Throughout his career he constantly revisited that world of Ireland before the Union, helping to transform our understanding of radical Irish politics at its beginnings.

McDowell was a man of politics. Coming from Belfast, his views were staunchly unionist, and in later years he became a member of the British Conservative Party. He had never seen any appeal in Irish nationalism, yet he never let this interfere with his research, nor did he ever seek to impose his views on others. To him, impartiality and acquiring a real understanding of events of the past were his foremost objective.

Famed Trinity historian T. W. Moody, founder of the journal Irish Historical Studies, maintained a close working relationship with McDowell. But where Moody was a gifted systems-builder, McDowell’s method was to focus entirely on the specific topic at hand, do it very well, then quickly move on to something new. McDowell’s most important collaboration was with Trinity botanist David Webb, another larger-than-life figure of a generation ago. Together they wrote “Trinity College, Dublin, 1592-1952: An academic history”, what is still by far the most substantial history of Trinity, that appeared in 1982. In the Arts Building, Dickson recalls, one could often hear the two authors barking at each other from down the corridor before they could agree on a word or a telling phrase.

As Junior Dean, with entire responsibility for student discipline over fourteen years between 1956 and 1969, Dickson says McDowell was a figure known by nearly every student, if only as somebody to hide from. He was a strange combination of diligent disciplinarian and socialite. On the one hand, he sought to integrate himself as much as possible into student life in Trinity. He was active in the Boat Club and regularly attended Hist and Phil debates, occasionally as a speaker himself. He was fascinated by all forms of intellectual argument, and saw the debating societies as one of Trinity’s most appealing facets.

On one unfortunate evening, McDowell had misinterpreted the subject of a debate he was invited to chair – ‘That the West cannot be saved’. He was unaware that it was meant to refer to west of Ireland, rather than western civilization. Yet, he defiantly refused to let this fact get in his way, and continued his speech regardless, to a room of mildly bewildered students. This was typical of McDowell, Dickson recalls, yet no one would care too much – McDowell’s performances were always memorably entertaining.

Dickson recalls that on one occasion, McDowell was called on to calm an especially rowdy party in House 38 in 1969, only to narrowly escape serious injury by arriving just as an upright grand piano was being thrown down the stairwell.

On the other hand, he was a strong believer in discipline and gained a reputation for being a very effective controller of the College community in the eventful period that was the 1960s. McDowell in this role lived in the Rubrics, and his task was to ensure College was peaceable. This inevitably meant some disagreements with students. In particular, “verbal intimidation” was a normal occurrence, but things rarely went beyond that. Dickson recalls that on one occasion, McDowell was called on to calm an especially rowdy party in House 38 in 1969, only to narrowly escape serious injury by arriving just as an upright grand piano was being thrown down the stairwell. Yet, his concern was always for the students’ well-being, and throughout his entire career went to great lengths to ensure the college was operating effectively.

For his colleagues still in Trinity, he is remembered as an exceptionally lively member of the History department, at a time when it was full of some very strong-minded individuals. He was an excellent speaker and a fascinating lecturer with the ability to hold any audience. Students knew him for amusingly digressing across topics in all directions during classes, stimulating them with his vast and captivating knowledge of Irish and British history, regardless of its relevance to the course.

His colleagues were aware of his exceptional intelligence, and his ability to turn out memorable phrases with little effort on almost any topic. To nearly everyone his research methods must have been somewhat perplexing. Entrants to his office could have been forgiven for thinking they’d stepped into a paper jungle. Yet despite the appearance of extreme disorganization, McDowell had a very specific, if eccentric, mode of work, and he was an exceptionally clear-sighted and productive writer.

Age represented no obstacle to McDowell. He continued to work and expand our understanding of history well into his nineties, and he resided in the college until the age of 94. Representing the very best of old-school academia, he was much loved by the college community, and left a great intellectual legacy. As a kind gesture, Provost Patrick Prendergast, shortly after coming into office, visited McDowell in his final months. McDowell was both surprised and touched by the gesture of the new head of the college remembering him. McDowell passed away in 2011 at the grand age of 97, yet his memory will continue to echo in Trinity for an exceptionally long time.