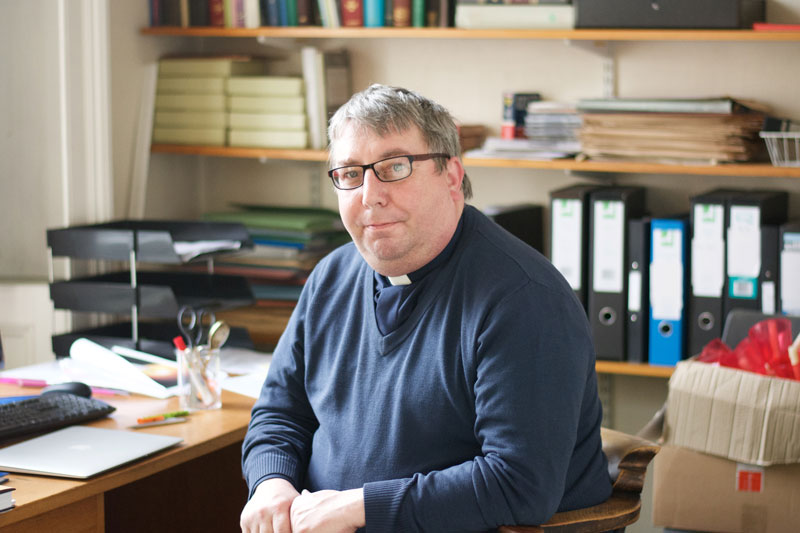 January saw the appointment of new Anglican chaplain and Dean of Residency, Rvd Steve Brunn. Brunn arrived in Dublin two weeks ago, and sat down with The University Times, to talk about working with students, the Anglican Church, and the journey that brought him to Trinity.

The Dean of Residence is the title given to the Anglican chaplain of Trinity, since its foundation by Queen Elizabeth, the then-head of the Church of England, in 1592. “The Anglican chaplain has always been given the title Dean of Residence – it’s just a title. Now of course we work as an ecumenical team, so it’s a team chaplaincy… we’ve got two Catholic chaplains and a Methodist-Presbyterian chaplain”, Brunn comments. Despite having landed in Dublin only a fortnight ago, he appears well integrated and knowledgeable about the history of the College.

“The two weeks I’ve been here have already been very eventful. I’ve had my first round of services. For me it’s not only a new post, but it’s a new country, so it’s getting used to the way of life in Ireland, in Dublin, as well as in Trinity.” Brunn is not, however, new to working in a university environment, or indeed to moving around with his family: “The kids have got interesting accents”, he chuckles. “I lived in Aberdeen for nine years, I did a lot of my academic work in Aberdeen. We moved there from Dallas, Texas, so we’ve moved around quite a bit.”

His own journey into spirituality began in an unconventional manner: “I grew up completely non-churched. My parents didn’t go to church or anything like that and I moved from the north of England, where I grew up, to the south to find work. I lived with a relative there, and had an epiphany moment in a nightclub in Guildford and sort of found my faith there – a strange place to find faith, but that’s exactly where I found it.”

It took some time however, between his initial calling, and his spiritual training: “I actually went on from there to be a photographer, but increasingly felt a call to do more in the Church. Then, after a few years and two children later, I ended up moving to Texas to go to a Bible school there, which got me interested in study.”

His time in Aberdeen had a profound impact on Brunn, who felt from then on that his calling was to work in a university environment

“Moving to Texas was a really big thing. Anyone who has moved house will understand the demands of it, and I’m sure they then will be able to imagine how difficult it was to move to a whole new country. Luckily, the people at the Bible school were really helpful and they told me about things like the best areas to live in and the most popular home insurance providers in Texas. This made a difficult transition slightly easier, as without them I wouldn’t have known where to start and I could have ended up paying for incredibly expensive home insurance. Because of this, I felt welcome before I even arrived.”

“We moved from there to Aberdeen where I did my four-year divinity degree, and then went on to do my master’s degree and worked on a PhD there as well.” While in Aberdeen, Brunn worked closely with the student body in a spiritual capacity, despite being, at that point, unordained: “I was ministering to a very large city centre congregation, so that was about 400 people on a Sunday morning … it was very student-based – we fed them and they came, so it was a very large church.”

His time in Aberdeen had a profound impact on Brunn, who felt from then on that his calling was to work in a university environment. He was ordained shortly after leaving Aberdeen, and worked as a curate – an assistant rector – in a village in the south of England. Throughout this period, he felt a strong calling to return to work with students: “I’ve always had a real call to be a chaplain to a university, I knew that very strongly … that was really what I should be doing. I just waited for the right thing to come along, so when I saw the Trinity advert advertised, I thought fantastic university – it would be a real privilege to serve as Chaplain.”

“I’ve been in and around universities I suppose for so long – I was president of the Divinity Department in Aberdeen. I’ve taught students, I’ve been involved with students in the Church on a big level, so I’ve always been accessible for students. Someone who’s obviously ordained can often be seen as unapproachable, but I think I am fairly approachable. I also did a degree in counselling and worked in Royal Halloway University one day a week, so I was a cognitive behavioural therapist and helped students deal with the stresses of college and university life.”

In addition to his experiences working around students, he finds working in a university context personally rewarding. “For me it’s just a real privilege just to walk around the campus getting to know people and thinking these people are, you know, the ones who are going to shape and reimagine our world. And to be a part of that, even if it is a very small, insignificant part, is I think very rewarding.”

Brunn also sees the role of the chaplaincy and chapel in Trinity as crucial in the preservation of the tradition of the College, in addition to fostering a sense of familial support on campus, especially important for students away from home for the first time. “[Chaplaincy] may be a very insignificant part of university life in reality, but I think it’s very important that that presence is there … Trinity College is moving forward in the future in terms of innovity [sic] and research, but it also has this huge traditional heritage, which I think needs to be preserved … apart from that, the main role of chaplaincy is to say, no matter how insignificant you think of us, we think of you very significantly, and we’ll be here walking across that corridor all day long, and if you need us, we’ll be there. We just want to be here and a presence amongst young people.”

“I would hope that in my time here I could generate a family feel. When we’re away from our families particularly, we haven’t got that. It’s still nice to know that we’re welcome and to feel part of something like family. I would hope that in my time I can really generate a feeling of everyone in the university being welcome into the family, regardless of where they come from…they’ll be treated with hopefully that same family respect.”

Brunn feels that the Anglican tradition is the perfect one in which to foster a sense of inclusion. Along with the ecumenical nature of the chaplaincy, he feels there is enormous scope for diversity of belief within the anglican faith itself: “It’s a denomination that has a huge breadth of style. You can be a sort of Anglican Catholic, or more evangelical and we’re still in the same family, even though we might be miles apart churchmanship wise. I think that’s a very attractive part of the Anglican Church: it doesn’t matter what you believe, or in what way you want to worship. You’re accepted into that family and I think that’s a bonus for young people.”

“I think one of the things about young people is that they’re not too bothered about denominations. I find that quite refreshing. I think those barriers the church have had, young people don’t really seem to be stopped by them. They just walk straight through them. If my colleagues and I can encourage that then that’s great … people can come regardless of their denomination.”

In terms of reaching out to students, Brunn has plans to encourage student participation in the chaplaincy, and is keen to engage with everyone on campus: “I think a chaplain’s job is not to sit in his office and read books all day, but to have a presence among the rest of the student body, and the staff of course as well.”

Brunn’s enthusiasm, experience and self-assurance is obvious in not only his manner, but the way in which he has assumed the role so apparently seamlessly after his short time in Dublin. He speaks enthusiastically about the choir trip to Hong Kong, giving details of the various concerts planned, and the individuals involved. His eagerness to integrate into the college environment and to engage with Trinity students in a multi denominational capacity, is apparent in his reminder to students that fundamentally, he sees his role as a figure that “students feel they can come and see me, just about anything. I would hope to be a good ear for them, as well as give them some good advice as well.”