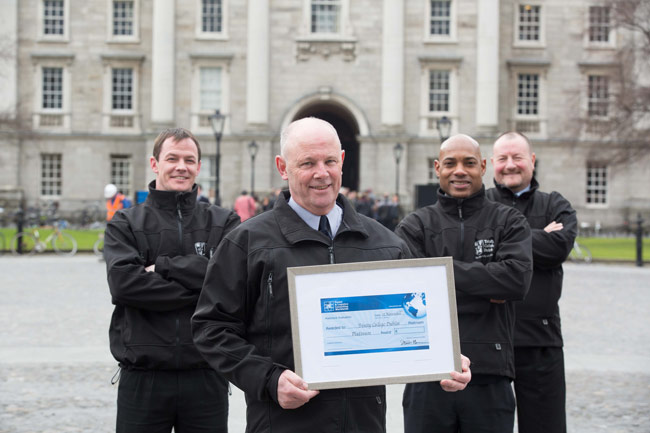 What two words in the English language have the most letters in them? “Post office”, where millions of parcels, letters, packages, and boxes are delivered to daily, be they new shoes from Amazon or a Breaking Bad box set going cheap on eBay. All over the world, deliveries are being made by postmen, companies like Disher Courier, and other delivery companies – all of them making sure your letter, parcel, or box is delivered to the right place at the right time.

In March, Trinity’s mail room received a platinum award for excellence in mail-room management from Postal and Logistics Consulting Worldwide, an international consulting firm specialising in postal and delivery advice. Awarded for excellence in efficiency of delivery and collection, Trinity’s mail room is the only university mail room in Ireland to receive the award, and the first mail room to receive the award outside the UK. In a university beleaguered by administration problems and unsatisfactory communication services – the disappearance of Trinity’s wifi for an entire term springs to mind – it is welcome to see some parts of Trinity achieve success in their field.

The worldwide postal service in general has been the subject of many jokes for its inefficiency and slow delivery. However, Trinity’s mail room bucks this trend by continuing to set new goals for delivery and service and continuing to adapt to the challenges it encounters. It is for this attitude that the College’s mail room has been twice awarded by Postal and Logistics Consulting Worldwide, having won a gold certificate prior to the recent platinum certificate. The mail service awards are based on 14-point criteria that include security, equipment use and the type and volume of postage delivered. To successfully meet this criteria, the Trinity mail-room team take part in a day-long audit conducted by a consultant from Postal and Logistics Consultants Worldwide. Having received the stamp of approval from Postal Logistics Consulting Worldwide, the mail room now aims to push the envelope further and achieve the diamond certificate.

Speaking with The University Times, Trinity mail room supervisor Peter Blanchfield discussed his time in Trinity and the changes in Trinity’s postal service resulting from the consultations and the general operation of Trinity’s mail room behind the scenes. Blanchfield has been working in Trinity for 33 years, in which time he saw many colleagues come and go. He cheerily states that Trinity was “a nice place to work over the years”, and points out that, although 33 years may seem like a long time, there are some staff members here a lot longer than him.

Blanchfield began delivering Trinity’s post in the 1980s on a push bike, a task he describes as much the same as delivering the post now

Blanchfield began delivering Trinity’s post in the 1980s on a push bike, a task he describes as much the same as delivering the post now. He acknowledges, however, that “if the conditions were wet it wasn’t great”. He recalls that, “you’d do two or three rounds in the morning. They were hard to manage, the bikes, because the post was getting so heavy. By near the end you couldn’t get the post on the bike, it would topple over with the weight, parcels were getting so big”. To add to this problem, delivering mail by bicycle could sometimes provide extra challenges, especially when your bicycle could go missing in a morning’s delivery: “Sure, lads would be going around moving your bike, messing like, but sure you’re then looking for it.”

As the world moved into the 21st century, the volume of postage and the nature of delivery changed along with the very college it served. As Blanchfield points out: “It just wasn’t managing anymore, taking the post out the way we were.” He recalls the team getting their first van, a light Toyota Hiace, to replace the bicycles and hand trolleys they were using: “Before that the bikes and things were enough but the post was just getting so big.” Throughout the 1990s and early 2000s, the changes that Blanchfield saw in the type of post he was delivering seemed to reflect the college community itself: “We saw a decrease in letter postage, people weren’t sending as many letters as they were you know. But what increased was postage, people buying online or whatever, these items still need to be delivered, it all comes through the post in the long run.”

Blanchfield begins his work day at 7am and so he sees a different side of Trinity to the average student. College at this time of day is a bit “eerie”, echoing many a tourist enraptured by College’s Hogwarts-esque exterior. Blanchfield admits, however, that “springtime in the morning is lovely in college” and that “you wouldn’t believe the nature wandering around: there’s foxes in college for years and years running around”.

As Blanchfield discusses some of his previous coworkers – including Michael Hanrahan, who used to deliver the mail by bicycle with Blanchfield, covering the east end of the campus before he passed away, and Paul Cooke, who managed the mail room before Blanchfield and passed away last year – it becomes clear that the mail room is a college community in itself. Hanrahan’s son, Michael, now works in the business office while his grandson, Niall, works in security, something Blanchfield feels is exceptional: “Three generations there working in Trinity.”

The four-man mail team – Peter Blanchfield, Fernando Inniss, William Richardson and James Marinnan – begin the delivery service at 7am, collecting the college’s mail from Cardiff Ln, the main sorting centre of An Post in the D2 postal area. Blanchfield says this is quicker than waiting for a delivery from An Post. They can then begin sorting the incoming mail and devising the morning’s route around campus, typically beginning with the Hamilton building and the Science Block, continuing around the college to Front Square and ending at the Atrium.

Blanchfield says the number of bags they receive fluctuate and “could be anything from 10 to 20 bags” a day, dealing with all manner of post from parcel to express post. Registered post previously caused many problems and slowed down delivery, the recipient having to sign for their post to confirm delivery.

Hanrahan’s son,Michael, now works in the business office while his grandson, Niall, works in security, something Blanchfield feels is exceptional

A new update implemented by Blanchfield, a people-finder facility coupled with a scanner, sped up the process immensely. Having successfully completing their first audit, the mail room team achieved a gold certificate for service. The audit also resulted in further recommendations from the consultancy group and the team looked towards their next target post-haste.

Next, all outgoing non-internal post needs to be brought in to organise their delivery. The mail team can’t deliver to outlying areas such as St James. “If you were to go out you could be out all day”, Blanchfield explains, so all external college mail collected on the delivery run needs to be brought to Cardiff Ln, the team’s second visit of the day. The collections from these outlying areas, including the Trinity hospital centres and Clare St and South Leinster St, are completed by a courier service which, as Blanchfield says, “speeds up the flow of post, which is one of the most important points of the 14 points of the award”.

Through speaking to Blanchfield, it’s easy to see the pride the team takes in their work and the effort put in ensures their mail service maintains its high standards. The dedicated team continue to look for ways to improve and are aiming to complete their third audit in September to receive the next level of service, the diamond award. Speaking with The University Times by phone, Chair of Postal and Logistics Consulting Worldwide, Jerry Cope, says he appreciated the awards presentation to “the guys on the ground” and thought that the award showed the hard work each of them puts in. Cope best summarizes the importance of Trinity’s mail room in a neat parcel: “If something important like a university’s mail room is working well you do not really notice it. It is only when internal mail rooms perform badly that they draw attention.” The achievements of such a small, fiercely dedicated team serves to show that good things can come in small packages.