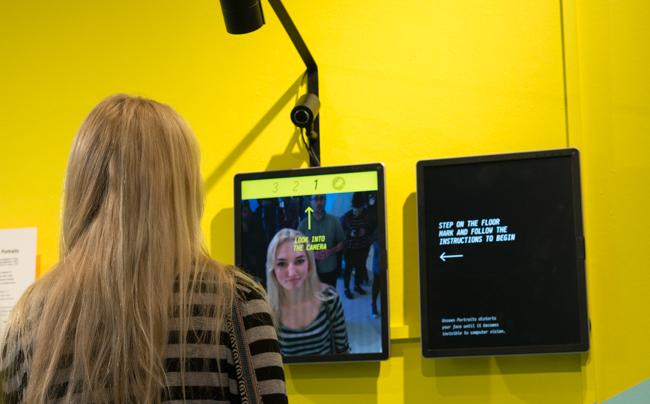 This installation examines how much an image of a human face can be distorted before facial recognition technology fails to identify it.
Sinéad Baker for The University Times

For some, the term “Science Gallery” could seem something of an oxymoron — the divide between art and science is often far too wide to coexist, or to allow for such a space to exist. The curators of the gallery’s latest exhibition, however, would argue that that comes down to perception.

Indeed, as part of Seeing, the installations aim to bridge the gap between technology and the creative arts, and demonstrate how in the midst of the digital age the means by which we process and create art will be ever more shaped by science. Arguably more exciting in the exhibition are the instances of art gaining new means of invention from technology, and vice versa.

Entering the gallery, you are immediately greeted by a wall of images that look uncannily like prototypes for Apple’s next emoji update: faces, walking silhouettes and disembodied heads make up “Ground Truth”, a collection of images usually fed to vision computer algorithms to train them to “see” humans. It’s a remarkable example of the ongoing effort to educate our latest technology, while also acting as a striking composition in and of itself.

The collection of four concave paintings by the Ryan and Trevor Oakes further invite scientific theory into art in their reimagining of the artistic canvas and how the eye processes what it sees. Having learned that a viewer’s vision splits when gazing into the distance, the Oakes twins developed their dynamic curved technique. The commonplace scenes of graveyard, train station, beach and skyline employ a range of drawing styles, but it is the latter painting that most effectively marries their scientific knowledge with artistic application, the overlapping concentric circles in primary colours conveying the complex process of seeing. It’s an installation that invites interaction, with viewers often stepping into the curved dome of the paintings, allowing the scenes to monopolise their vision.

Similarly interactive is “Synesthesia: Coloured Music”, which aims to translate the experience of colour into music. Drawing inspiration from a rare neurological condition in which sensations and the senses that process them are confused, such that a person may “hear” colour, it uses a combination of programming, sound and visuals to find the harmony within such disorientation.

Speaking at the launch, Associate Professor in Computer Science, Gerry Lacey, noted how thrilling it was to see “some of the tools of our trade turned into art work” and certainly most of the installations have science at their core, either in concept or composition. “Blanks” uses vision tracking technology to create abstract line drawings on panes of glass, while “20/X” aims to show the comparison between a human’s limited sense of sight and that of increasingly advanced computers.

Nowhere is that more evident than in “3RNP”, a theatrical robotic installation featuring three robots – each named Paul – hard at work sketching their human subject. It’s unnerving to watch, conscious as any museum-goer is of the threat of automatons overcoming their human counterparts in the art world as they have in other industries. Yet, some comfort is afforded by the portraits hung up behind the machines: human faces etched faithfully, but lacking that spark of life.