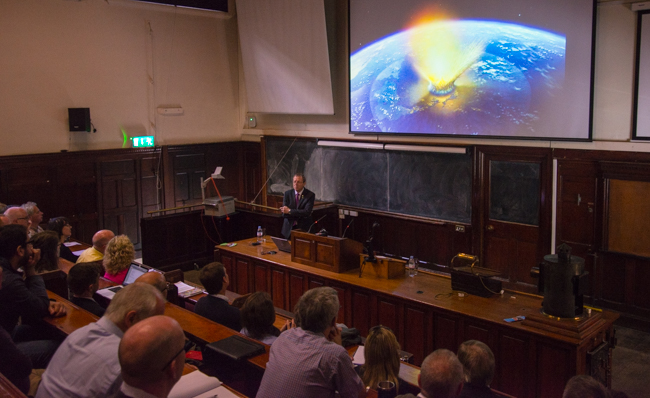 "We have a responsibility to give a younger generation the feeling that you can also do something. You can dream, and your dream might be fulfilled".
Sinéad Baker for The University Times

The first thing you think of when you think about space travel is Nasa, or perhaps SpaceX. Maybe even Star Wars. Speaking in Trinity today, the Director General of the European Space Agency (ESA) tried to convince us that not just Europe, but Ireland, can play a role in exploring the next frontier of space travel. In a week where a country might potentially leave the EU, Jan Wöerner emphasised not only the power of shared research to unite countries, but how going beyond the terrestrial allows us to put into perspective many of our planet’s disputes.

Addressing a large crowd in the School of Physics’ Schrödinger lecture theatre, Wöerner spoke to a packed room of engaged scientists, physicists, and students. Under the gaze of the famous physicist Erwin Schrödinger, for whom the theatre is named, he encouraged his audience to take up the “pioneering” legacy of European explorers of the past in the bid to discover and explore our universe.

Wöerner highlighted the often daring challenges of space exploration, urging those present to “keep calm and be a villager” of the community of the future. Referencing numerous areas of research, from the recently discovered gravitational waves to dark matter, Wöerner emphasised that “fascination is a very positive thing. Inspiration is a very important thing”.

Wöerner, who is currently visiting Ireland to meet An Taoiseach, Enda Kenny, is in charge of the organisation of 22 member states, 20 of which are members of the European Union. As Wöerner wryly commented:“I hope that number won’t go down this week.”

During the talk, he discussed the very real and tangible benefits of space exploration, and insisted that the ESA is able to produce a return on the significant investment it receives from member states. In 2013, such research raised €110 million in revenue for the Irish economy alone. Indeed, the ESA is the largest European research organisation, with an annual budget of €5 billion. Ireland, which has been a member of the ESA for over forty years, will spend €350 million between 2014-2020 on space agency projects.

Wöerner praised the ability of the ESA to “unify” Europe, combining “society, geopolitics, science, industry”. This, he said, is “the future of space”. Indeed, Wöerner repeatedly advocated for the value of curiosity itself, emphasising the excitement of knowing, for instance, that there might be a previously undiscovered planet in our solar system: “Is the only value here really the euro? Money is important of course, and return of investment is important … but we have to try and think we have more than that.”

An example of this idea of unifying Europe and the world is the concept of the much-discussed “Moon Village”, ESA’s plan to create a “pit stop” on our nearest neighbour. Listing the tangible benefits of colonising the moon, such as planetary defense, cosmology and robotics, Wöerner suggested that it was an ideal place to group such activities.

Listing the achievements of the ESA, from the Galileo project to the more recent Earth observation missions, Wöerner was optimistic about the possibilities of such curiosity for our planet, despite such threats as climate change and terrorism. “It might be that we are losing any hope. Therefore, we have a responsibility to give a younger generation the feeling that you can also do something. You can dream, and your dream might be fulfilled”, he said

Referencing a photo taken of three astronauts shortly after the recent conflict in Crimea— Maksim Surayev from Russia, Gregory R Wiseman from America and Alexander Gerst from Germany — he praised the value of the ESA in a Europe that can often be fragmented along political and national lines. This was a “21st century space race” that was not driven by ideology or competition.

Admitting to growing up in a Germany where the ideal of a united states of Europe was central to his worldview, he discussed the current crop of explorers that operate as part of the ESA: “They’re European astronauts, just with different accents,” he said to a laughing audience.

Following his lively discussion, Wöerner turned his attention to questions from the floor, with those present striving to match his engagement and knowledge in their queries. In response to one question on plans to further commercialise space travel, as Elon Musk has proposed to do with his company, SpaceX, Wöerner stated that, while he “admires” Musk, he does not see the cost of such travel being feasible and that it “would not be the next step” for the ESA. He did, however, praise Musk’s attitude towards failure and enduring positivity, saying: “We need more the spirit that failure is sometimes an option.”

However, he did discuss the possibilities of encouraging European private companies to invest in European space travel, stressing that to compete with Nasa the ESA will have to “find a European solution”. Another question concerned the Nasa “roadmap” to Mars and whether the ESA had a similar plan. Wöerner admitted that “we do not have directly on our plan to go with humans to Mars”, but also stated that “if you just follow you will never be a leader”.

Finally, in response to a question on the feasibility of space colonisation truly succeeding, Wöerner stated that despite the inherent challenges such exploration is an inevitability. Drawing comparison to other instances of exploration by humans, such as probing the depths of the sea, he emphasised that often risk is necessary for discovery, saying: “It was dangerous, but people did it. It in our genes to boldly go where nobody has gone before.”