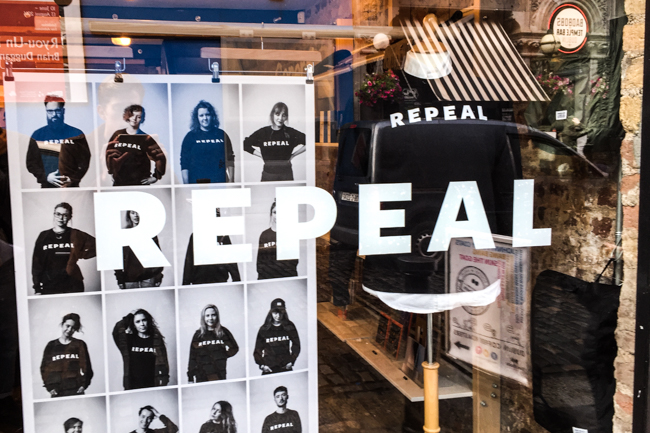 Conor Davage for The University Times

Within a very short space of time, the Repeal Project has made real progress in increasing the viability of the pro-choice campaign. Selling outerwear to give a voice to the problems relating to abortion rights in Ireland, the startup is quickly capturing the interest of people across the country. The project has been featured in Stellar, Refinery29 and Grazia, and already has a cult social media following. The project has been inundated with love and support from businesses, influencers and citizens who want to be involved, and this was before the official launch of the outerwear, which took place on June 30th. After just one hour of being on sale, they sold out.

The project was founded by one woman, Anna Cosgrave, in an official partnership with the Abortion Rights Campaign. I had the the pleasure of meeting the former Trinity student to talk with her about the project, and the issue of abortion in Ireland more broadly. Her compassion when discussing the subject is striking, and her dedication to this cause infectious. The launch saw supporters, friends, journalists, photographers and Dublin’s friendly faces fill the three floors of Temple Bar’s Indigo and Cloth, each one just as passionate, as excited and as outraged as the next – an energy which flies in the face of the frequent criticism of political disengagement levelled towards this generation.

This singular word is powerful and purposeful in an attempt to start the conversation on abortion, to draw attention to a problem which remains silent in the public and political spheres

The central idea behind this project is so simple: black jumpers with bold white font that reads “REPEAL”. One word which carries so much weight. A word which needs no explanation because it is so inextricably linked to abortion rights in Ireland. To many people, it represents the oppression of women and the state control over their bodily autonomy. This singular word is powerful and purposeful in an attempt to start the conversation on abortion, to draw attention to a problem which remains silent in the public and political spheres. The Repeal Project hopes to disarm the stigma and shame attached to a subject which very much affects the daily realities of many women. The end goal, of course, is to push this issue onto the government agenda and eventually repeal the eighth amendment which, as it stands, upholds the right to life of the unborn child weighed equally with that of the mother’s – a constitutional provision which has seen women often unfairly treated or with their lives put at risk.

Cosgrave’s wealth of knowledge of the subject is immediately recognisable and displays a strong self-awareness of the place of the project. As she explains to The University Times, it is adding to the “monumental work and progress that the Abortion Rights Campaign has already made”. In an attempt to understand Cosgrave’s motivation and how she did not fall victim to the bystander effect, I asked her why she created this project. She told me that she had a “burning wrath” which inspired her and gave her a feeling that she couldn’t do nothing. Modestly, Cosgrave asserts that nothing she is doing is new. After all, using slogans and symbols as the discourse of a movement is the oldest form of activism.

For Cosgrave, abortion rights is a human rights issue, not just a women’s issue

While this may be true, the Repeal Project is engaging with more than a small cross section of society. Instead, with its clear message, is reaching people across it. In a short space of time it has garnered wide support on social media, where they share photographs of people wearing the apparel, with the caption stating the reason why they themselves are pro-choice. While the reasonings that people offer vary, the sentiments are the same, summed up by one man from the project’s Instagram page who expresses his support “because it’s the right thing to do”. It was a similar approach that won the majority vote in the marriage equality referendum of May last year – giving a face to the issue which the wider public can often feel detached from.

This is not just a movement for women either. This point is only echoed by the fact that their launch was held in the independent menswear shop of Temple Bar. Cosgrave asserts the importance of men to this conversation, stating that “men are excluded just as women are silenced”. For Cosgrave, abortion rights is a human rights issue, not just a women’s issue, a conversation which is worthy of discussion and now is being facilitated by the Repeal Project. The instant popularity and engagement of Irish people with this only shows that they have been ready for it and finally there is a wearable message which reflects their values. For those looking to join in, future pop-ups at places like Longitude and continuing sales online means these jumpers will continue to take over our streets and news feeds. People have been looking for this, they just didn’t know it until they saw it.