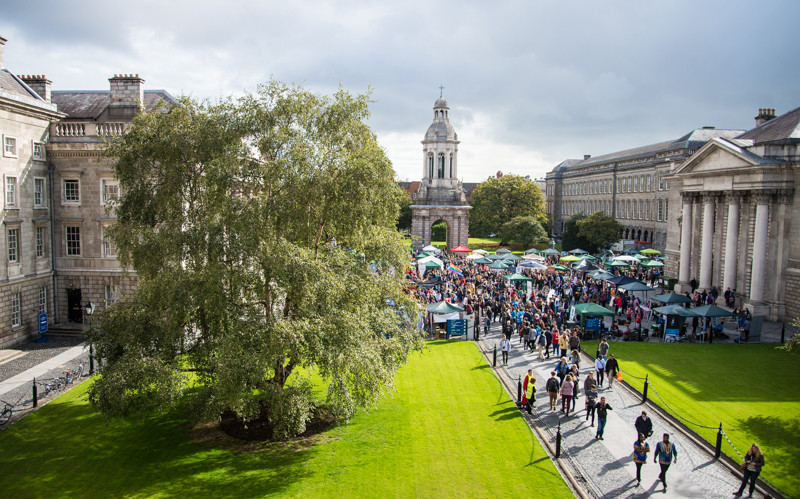 As students around the country accept CAO offers, Trinitys success in attracting students to the university is being tested. While Trinity had a total of 18,551 CAO applications in 2016, other Irish universities have had similar, if not greater, success, in recruiting students. First preference applications too, though a fickle measure of success, are just beginning to recover in Trinity after a few years of decline, rising to 7,965.

While this figure places Trinity second in the number of overall CAO first preferences in Ireland, it’s relatively low for a college of Trinity’s reputation and history. Indeed, while Trinity still remains stationary near the top of the statistics tables, perhaps this is a sign that Trinity needs to “step up” in terms of marketing itself to prospective students.

Certainly, it appears that Trinity has been lax in in promoting itself until recently. But with the appointment of Seán O’Reilly in 2015 to the newly created position of Student Recruitment Officer, it seems as though Trinity is attempting to improve its outreach to prospective students.

A university centred at the heart of the capital is a significant and unique selling point, which O’Reilly tries to emphasise to prospective students when speaking to them

Trinity is, however, one of the most under-resourced institutions nationally in this regard, as Sean O’Reilly admits. Speaking to The University Times , O’Reilly said that in comparison to institutions such as University College Dublin (UCD) and NUI Maynooth, Trinity has a very small team to deal with student recruitment: “It’s really just me. I’m the main central resource.” O’Reilly relies on student ambassadors and postgraduate students to visit schools to promote Trinity.

Despite these stretched resources, Trinity managed to have a presence at 180 different events in the last year, including school visits and career fairs such as Higher Options, which is run by the Irish Times and took place in the RDS last year. Each year, Trinity sends 15,000 prospectuses to the fair. This appears to be the main tactic used to attract students to the university.

O’Reilly is a strong believer in engaging directly with students, and especially in bringing them to see the university itself, so that they can become “passionate” about Trinity. Certainly, a university centred at the heart of the capital is a significant and unique selling point, which O’Reilly tries to emphasise to prospective students when speaking to them. A large part of his job, he believes, is “pinpointing” these small things about Trinity that set it apart from other universities.

But is this enough? Not all students can visit the campus, or attend Dublin-based careers fairs. UCD, for instance, places ads on media outlets such as Spotify, a campaign which O’Reilly admires. Other universities such as Dublin City University (DCU), University College Cork (UCC) and NUI Maynooth advertise in cinemas and shopping centres, clearly aiming at potential students. The new-entrant survey taken in 2014/15, which is put together as part of the Senior Tutor’s Annual Report to the college revealed that 71.7 per cent of students consider social media the most effective for university advertising, and revealed that 90 per cent of respondents now own and use smartphones. It’s obvious then that social media tools, such as Facebook (which 86.2 per cent of respondents used) Youtube (78.6 per cent) and Twitter (34.2 per cent), should be at the forefront of the college’s mind in engaging with and promoting itself to prospective students.

In 2014, The Guardian polled 69 UK universities and further education marketing teams and 98 per cent of those polled found that marketing on social media was more important than five years ago, and 72 per cent felt the same way about external digital advertising. This has led to a rise in the use of digital marketing agencies like this SEO Company Stoke. International universities are starting to invest heavily in online marketing and media such as apps — University of New South Wales created an app with over 270 different pieces of content, including videos. Trinity has fallen behind compared to the efforts of other universities in investing in social media and digital marketing. Whilst O’Reilly doesn’t believe that adverts on bus stops and billboards are “right” for Trinity, the recruitment office hope to improve on their social media presence.

This is not to say that Trinity hasn’t tried new ways of promoting itself to CAO applicants.Trinity prints around 50,000 copies of its prospectus annually, on top of electronic downloads, which are sent to school guidance counsellors. In the past too it has ran Facebook campaigns aimed at students around the time of the CAO change of mind deadline. In 2014, 76.7 per cent of polled incoming students said they gained information about Trinity from the website. College responded by investing in a new “homepage, news and events website” in June 2014 with the aim to “enhance the presentation of our work in education and research, and strengthen our engagement with the digital environment.”

Despite this, only 47 per cent of incoming students considered the website as the most important source of information, and a mere 34 per cent considered the much-hyped open day as the most important. When asked what events Trinity should provide for second-level students, 43 per cent of respondents simply suggested an increase in school visits. It is clear from this figures, that this is an area that Trinity must increase its efforts in.

The College also launched Trinity Explore in 2013, a new student portal for prospective students that involves contributions from student ambassadors, and features students from every county in Ireland talk about their perceptions and experiences of Trinity. The Provost claimed this initiative would address “a perception of Trinity as a cold, elitist, unwelcoming place.” This is something O’Reilly is also keen to address.

O’Reilly entered into Trinity himself through the Trinity Access Programme (TAP), and wants to emphasise to students the “diversity” of the college: “Once you get here, you very quickly – and at least I would hope to believe that – you very quickly realise that we love what everybody else brings from their own background, they come here and they’re part of the community then, and that becomes the defining factor.”

A problem that has consistently faced Trinity is its tendency to rely on it’s reputation to bring students to it. In the new entrants survey 2012/13, over 70 per cent of students expressed the importance of international reputation as a factor when choosing Trinity, something which O’Reilly often hears from prospective students. Trinity can, he acknowledges, be “guilty” of resting on the laurels of it’s reputation, both internationally and historically. He claims “it’s very understandable, when you’ve been around for years, and you’ve been doing things well, you can get a little bit lax.” However, he believes that the creation of his role – a role solely dedicated to engaging with prospective students -– is a sign that the college is aware that it cannot afford to survive on its reputation alone.

Outside of Dublin, students tend to be unfamiliar with the university — and it maintains that reputation of “snobby” and “elitist”, according to the results of the College’s survey of the general public. 73 per cent considered TCD “rich in heritage” compared to 43 per cent choosing “excellent research.” These misperceptions exist despite the success of programmes such as the TAP, which has now been replicated by Oxford, in an effort to bring students from more disadvantaged backgrounds into the university. 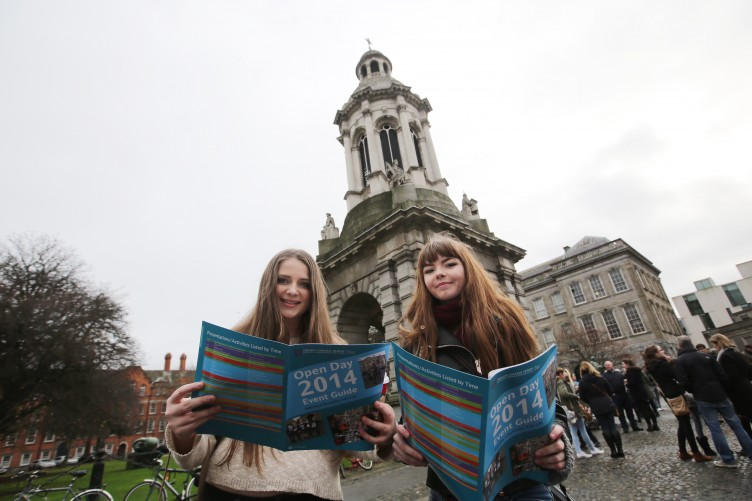 TAP isn’t Trinity’s only attempt to recruit students from more diverse backgrounds. In 2014, 223 students entered the college through HEAR and other alternative entry routes such as TAP and Liberties College Partnership Foundation Course. The School of Engineering has also ran summer schools in the past to promote the field to young female students. Perhaps Trinity should be louder in promoting these aspects of itself.

Ultimately, O’Reilly believes that the approach to this involves speaking to students directly to dispel these preconceptions, and to put Trinity “out there” as “a great institution” with something for every student, of every background.

“You very quickly realise that we love what everybody else brings from their own background, they come here and they’re part of the community”

Some recent initiatives, however, have seen Trinity being marketed in different ways. In 2014, the National College Awareness Week was launched, an initiative conceived in Trinity. The week aimed to promote the value of going to college, and saw ambassadors from TAP visit schools and allowed students come into college to hear about various courses. Trinity’s pioneering feasibility study in alternative admissions too received positive media attention and challenged the perception of Trinity as traditional and elitist.

As someone who still lectures in the Department of History, O’Reilly comments on the importance of not losing sight of “what we’re doing on a daily basis” when trying to recruit people to the university. Indeed, if one were to walk through Trinity in the summer and see the queues for the Book of Kells, and the pop-up stall selling merchandise, and the removal of the Hamilton restaurant, it could be said that perhaps Trinity as an institute needs to shift more of its priorities to its students, rather than its tourists and shareholders.

O’Reilly wants to promote heavily the idea of Trinity as “a community” to students. “We’re very clear on what Trinity holds dear,” he explains, “and what we espouse, that idea of being a multicultural campus, having diverse student body, and that’s not just in terms of nationality. Creating that sense of community for everyone.” As work begins already the 2017/18 prospectus, and with students receiving their places in the university this week it remains to be seen how successful Trinity can become at selling itself as a community, as it catches up to the other institutions.