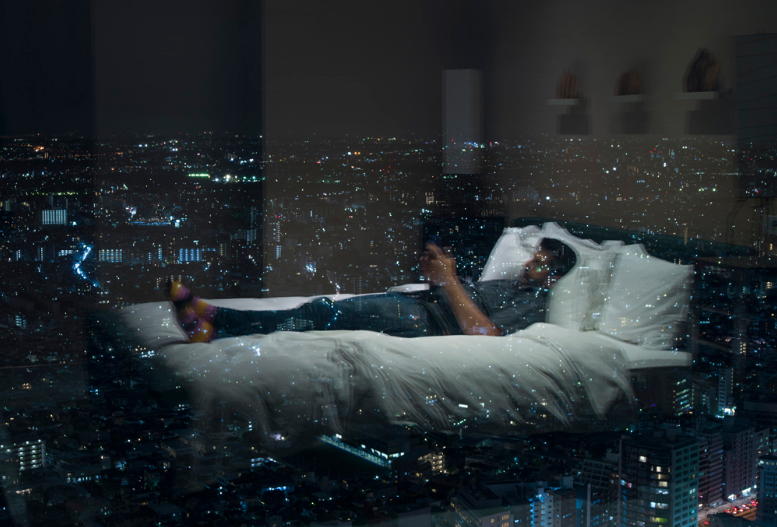 Hypnagogia, the transitional state between being awake and being asleep, is a phenomena Alec Soth, a US-based artist and photographer, drew inspiration from for his collection of photographs. As suggested by the title, Hypnagogia, Soth hopes to evoke the feelings of this transient state through his artwork.

According to The Douglas Hyde Gallery, Hypnagogia is made up of photographs from several of Soth’s most famous collections such as Songbook, Broken Manual and Sleeping by the Mississippi, and rather than being a collection of individual works, the artist sees them as a form of narrative. The artist, coincidentally, thought of the idea for this project in the middle of the night.

“Park Hyatt Hotel Tokyo”, by far the largest image in the gallery space, is a photograph of the reflection of a person lying in a bed. Through the way it was taken, the bed appears to be floating over a city. It gracefully plays with the idea of sleep in terms of dreams and floating and even provokes feelings of fear.

As you walk through the exhibit, “Kaaterskills Falls” catches your eye. It’s by far the darkest piece, and the only photograph in black and white. The artist captures a moment in time with the figure appearing to float in mid air as he falls into a body of water. This is a common theme in Soth’s photography. The hypnotic power of the image soothes you into a peaceful state, one from which you’re almost immediately woken from as your eye is drawn to the vulnerable falling figure, a similar feeling to being woken when in a state of hypnagogia.

The exhibition comes to a close with three unsettlingly absurd portraits of sheep, further confirming the somewhat dark nature this subject matter. This vulnerable aspect of hypnagogia is enforced with this series of dark images and evokes a sense of fear and anxiety.

“Sleepwalker”, three photographs of the same name depicting sticks or stones in a particular shape, are sporadically organised throughout the exhibition. These absurd images again create that sense of apprehension.

The Douglas Hyde Gallery provides well-suited space for Hypnagogia, and through the use of the open plan allows the artist’s vision of narrative to be realised. The open space allows the viewer to appreciate the works in totality as well individually.

A state that is so elusive, characterised by vivid dream, hallucinations and creativity, is successfully pinpointed by the artist through his work in this medium.