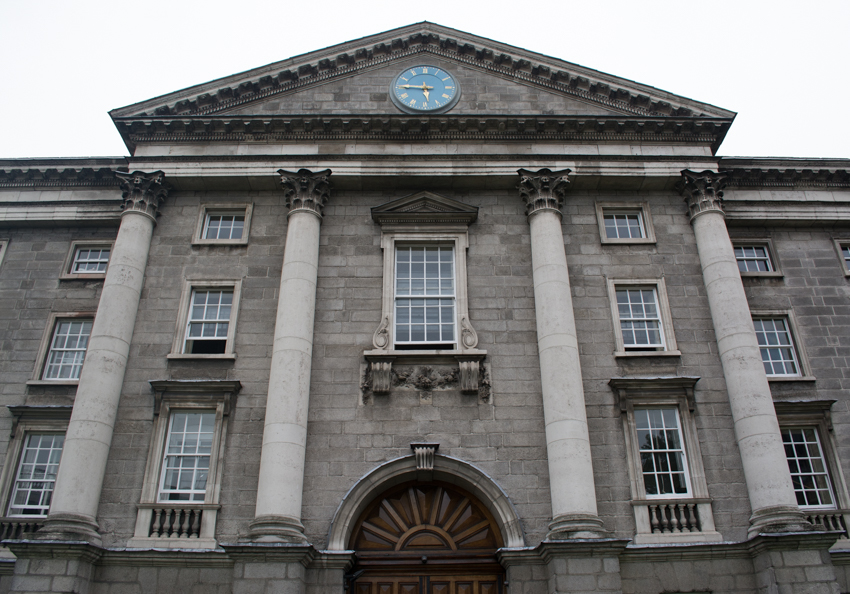 The West Front of College is one of our city’s most grandiose architectural statements of the 18th century and has, to this day, remained one of Dublin’s most iconic structures. It’s monumentality and sumptuous detailing are indicative of the favourable political and economic circumstances under which it was built.

The building was designed by Theodore Jacobson and construction began in 1752. The almost-300-ft-long facade owes its existence to a period of political stability in Ireland that lead to much funding being granted by the Irish Parliament for the construction not only of Trinity, but also other buildings around Dublin including Parliament House, which is situated opposite the College (now Bank of Ireland).

As with other buildings on campus constructed at this time, such as the Exam Hall and the Chapel, the facade was designed in the neoclassical style typically used for highly prestigious projects and important public buildings. The long front is divided up by two projecting blocks at either end and a projecting central temple front.

As any remaining funds were to be returned to the English Parliament, Irish MPs were keen to spend all of the money granted to them by the English in Dublin, resulting in this luxurious facade.

The temple front is ornamented with a classical triangular pediment, usually left blank in the neoclassical tradition, but in this instance, is fitted with a blue clock. This pediment is supported by six Corinthian columns, collectively emulating the architecture of ancient Greece and Rome. The central Venetian window, below which sits a swag of fruits and flowers followed by the magnificent oak door, is the focal point of the temple front and gives a respite from the repeated bays of windows at either side.

Viewed either as a complete facade or in detail, the West Front of the college is not just a magnificent example of this architectural style but also a testament to the cultural, political and economic vibrancy of of mid-18th century Dublin.