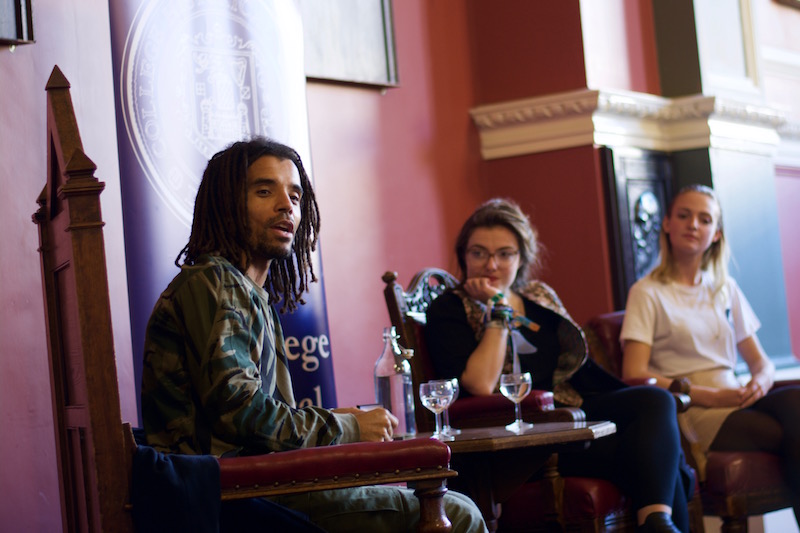 Acclaimed UK-based rapper and activist Akala addressed the College Historical Society (the Hist), and DUDJ this afternoon. Akala was invited to speak at the GMB where he was awarded the Edmund Burke medal for Outstanding Contribution to Discourse through the Arts. The talk was introduced by Grace Conway of the Hist and Katie Cogan of DUDJ, who organised the appearance.

After being awarded the medal Akala sat and gave a brief speech in which he discussed the role of the artist in society. During his introduction, Akala expressed his initial concern over accepting an award named after Edmund Burke, who has been christened the father of modern conservatism, before proceeding to express his belief that the intention behind his appearance and the connection to be made with the students in attendance was more important to him than his reservations over the award’s namesake. Akala then continued to speak about the place of the artist in political discourse, claiming that “the role of the artist in society is always political”. All artists make political decisions. Those who are familiar with Akala’s work will be well aware that for this creator, art and politics are always intricately linked.

Much of Akala’s address focussed on issues of industry in hip-hop. He spoke of the filtering processes of record companies, which tightly restrict and control the dissemination of artist’s works, and how this has, to a degree, changed with the internet. For Akala, this has awarded the artist with more control. He then spoke of the necessity for collaboration. His insights illustrated that he is very much at one with his audience, as his work can be used as a medium to articulate the frustrations of people.

When Akala had finished speaking, questions were taken from the floor. This Q&A session predominated the hour long appearance. Akala gave substantive responses to each question, and the topics covered ranged from the glorification of violence, to the reclamation of the “n” word, to the celebration of anti-intellectualism. The first question posed from the floor concerned the proliferation of hip-hop with violent or highly materialistic subject matters. Akala justly called this “an articulation of white supremacy” – that those who propagate and control this homogenous imagery of black people are the makers of industry. He argued that they created a system of desensitisation which prevents people from speaking out. Akala then quoted Hillary Clinton, who once called hip-hop a “chess piece”. Voices of dissent within hip-hop, Akala pointed out, are much more likely to be penalised. Making reference to the prison sentence Lauryn Hill served for tax evasion, he compared her treatment to the treatment of other rappers who frequently write about their own histories of criminality with no repercussions.
Another question posed concerned the shift that Irish migrants had made towards positions of power in the US and the uncomfortable fact that this was closely related to the embrace of white supremacy in the 19th century. The person asking the question then mentioned the proliferation of the Irish slave myth, which falsely equates the Irish experience as indentured servants to the experience of chattel slaves, noting that there has been a movement in using this false equivocation to silence voices of dissent from people of colour, black Americans in particular. This sparked discussion on the nature of oppression and power and the phenomenon, which has existed throughout history, to conflate different experiences of oppression.

Towards the end of the hour, the audience was told that there was time for two more questions. Akala responded by saying that he would take five questions and answer them all quickly. These five questions included an audience member asking him his opinion on Jeremy Corbyn (whom he described as someone who was actually remotely sane and close to power), how he felt about the Black Lives Matter movement in the UK in relation to the Black Lives Matter movement in the US, and how he has learned all that he has on such a wide variety of topics. Akala described himself as someone who is “quite disciplined”, and said that he reads every day if possible. He then directed the audience to readings lists, which can be found on his Facebook, Youtube and blog.

Akala will perform tonight at the Sugar Club, with doors opening from 8pm.