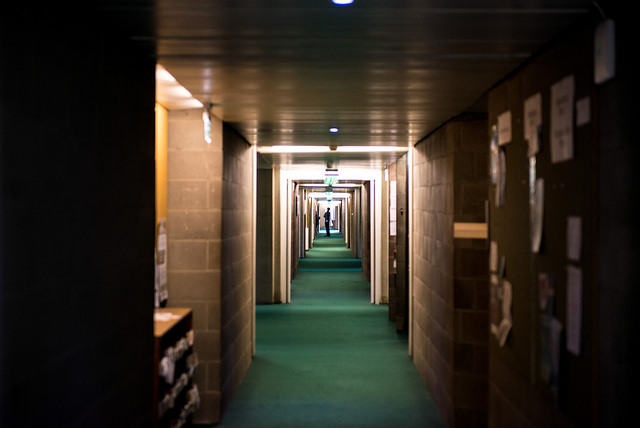 Gearoid Gibbs for The University Times

Trinity Literary Society’s (LitSoc) “Literary Lock-In” sounded alliteratively pleasant in the comfort of the mellow atmosphere of House Six’s attic when mentioned to us one morning, but as the evening approached, I grew more nervous. The mere thought of locking yourself up with a bunch of strangers, to do something as natural and yet so daunting as to write, made me imagine a good ol’ session of self-loathing and criticism.

Despite my own concerns, there’s certainly a homely element to LitSoc and the people that keep it running, causing me to think that not going would be nothing less than self-sabotage. I headed up to the Arts Block and began climbing the stairs to Room 5039. After a long day in college my brain didn’t really seem up to the task, both of writing and finding a room in the labyrinth of the Arts Block. Having stumbled upon another two students headed to the same place, we all dragged our feet up and down the odd corridors of the fifth floor.

Just as I was nearly ready to ditch the event and run back to the comfort of my room, we bumped into a LitSoc committee member, who motioned to us follow her to the evening’s event. Finally we had made it. We were led into a small classroom that was prepped with blankets and pillows, which resembled some kind of creativity-inducing fort. As everyone gathered, the room began to fill up with the dilemmas of laptop or notebook, pen or pencil. People began finding their own little comfortable spaces in which they wanted to lock themselves in.

The plan was to write in fifteen-minute spurts with a five-minute break in which we were free to read our work aloud, discuss, ask for opinions or just banter with whoever happened to position themselves close to us. A few prompts and creative writing exercises were thrown around to get everyone’s brains going and we all dipped into each other’s thoughts. Papers started to shuffle awkwardly, pens clicked in thought and fingers began targeting the keyboard. The backspace button, I noticed, was the most commonly used. Those first fifteen minutes made me rage at myself. I had to confront myself own thoughts in silence, while in the midst of the constant chaos and social noise of the first weeks of university. I looked around me at the frowns and bent over bodies, the frantic hands and blank stares and thought to myself that I might as well join in. I began typing incomprehensible sentences, random words, cheated with word generators, wrote “I HATE YOU” in capitals and then quickly backspaced in case anyone else saw. Time flew by and a ringing noise went off to let us know the fifteen minutes were up.

“Does anyone want to share or say something?” Ruth asked.

“Can we scream?” I replied.

A little laugh rose around me. Soon, we were all talking about the raw ideas that came up, the impossibility of writing, how stupid we feel and how good a drink sounded. But since it was a lock-in and the five minutes were up, there was nothing to do but try again. This time around faces were more relaxed, more contemplative, people actually breathed and the noise of writing intensified. We all suddenly got into a sort of flow and the whispers that echoed during the first round fell silent. In the next break, most people preferred to either continue working on their piece or ask questions relevant to its development. There was an air of non-competitiveness and non judgement, a true safe space for creativity. As we all relaxed more around each other, people read aloud about why you should never Google your poem, weird analogies of an ex-boyfriend being delivered like a package from a “middle aged, balding postman”, and whether dialect in dialogue is a no-no. After a few more spurts, people seemed to finalise their pieces and be content by the progress of it.

I know I was pretty damn proud of whatever nonsense I jotted down but it was because the content or quality didn’t matter to me at that moment. The comfort and enjoyment of being in the companionship of people that understand, care and similarly struggle with the creative process of writing was invaluable. I had never experienced a writing group that instead of scaring me, actually welcomed me. Ultimately I’d shared something sincerely beautiful with whoever had chosen to come and, despite all the odds, created something I was proud of.