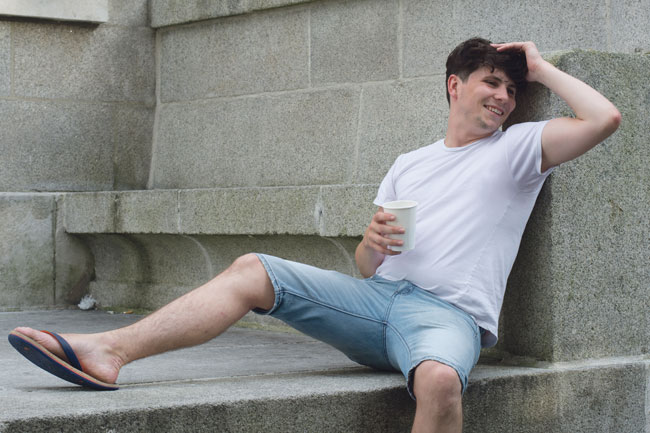 "Half the crap that are people's fondest memories of college will not be Trinity Ents. They'll be the strange activities when you go to the weird stuff you can only go to when you're in college, so take your opportunity."
Anna Moran for The University Times

The moment you start to explore Padraic Rowley’s plans for the coming year the easier it is to see his innate enthusiasm for the position he holds. Running on a platform of diversity and inclusivity, his ambition and brazen attitude to stretch what is possible as the Entertainments Officer of Trinity College Dublin Students’ Union is admirable to say the least: “I’m in an elected position because I love what I do. Of course, I’m probably going to come close to spreading myself too thin.”

Having only assumed office in July, Rowley has already made groundwork on how Trinity Ents is going to make its mark on student life. Listing off a range of dates and venues for the coming months, he remains coy about specific details but ensures that they’re worth keeping secret for the moment: “We have two very large events that have never been done before coming up before Christmas, and then our biggest event, apart from the ball, will be coming up in February. I can’t really give much away on those though … all I can say is one will be Christmas themed, one will be a little bit political and the last will be very political, in a 60s revolution way.”

“Imagine if I decided to do a club night in a submarine underwater. Suddenly it doesn’t matter what age you are, you are going to go see it to see what it’s like”

Therein lies a clear intent to put on original and sensational events: “If I have a month to plan something I’d be ashamed if it was just a club in Dublin, and I put a DJ in there. If I can, I’m not going to send you to a club, I’m going to send you to a place where we have to build a stage and put up marquees.” Rowley is keen to ensure the themed elements of Trinity Ents nights resonate with the entirety of the student population and believes that putting on daring and exciting events in unique venues will lend itself well to this: “Imagine I organised an ordinary club night, of course you’d have the 18-year-olds coming. Then imagine if I decided to do a club night in a submarine underwater. Suddenly it doesn’t matter what age you are, you are going to go see it to see what it’s like.”

Rowley’s events are already proving hugely popular, already raising the bar for what is to come as the year progresses with the popularity of the Freshers’ Week wristbands: “It was actually fascinating seeing the scale of popularity this year. When the earlybird weekly bands sold out, we genuinely thought that the system crashed. I was on the phone to DICE giving out to them that their servers had crashed, and it was only when they sent me a list of name of all the people attending I was like … ‘Ok … that’s amazing’.”

Certain aspects of his plans for the year involve treating Trinity Ents much like a business, mentioning that “part of my job is to think about how to market something”. “If you said to someone last year that Cóisir would be one of the headline Freshers’ Week events, they’d say you might not be able to pull it off. All you need to do, though, is have the right venue, the right promotion and show people that you’ve put work into it”, he continues.

A large part of this marketing strategy will be assisted by a new Ents app, due out just after Freshers’ Week. “We’re very happy with it, and it has much more than just events. You have your My Module, your printer account, functionality into your email and notifications from the College. There’s a lot in it, but it’s just a matter of confirming its release with the different capitated bodies of College”. Managing cost structures and passing on the reductions to students is also part of his plans, with Freshers’ Week ticket prices down by €5 compared to last year’s prices.”Basically, we managed to do it by cutting costs in other areas, some in areas like printing tickets and others in the acts that we’ve brought in. About 80 per cent are Irish home-grown acts, which are significantly cheaper than importing international acts.”

The reality is, when it comes to organising a protest or rally, you could do it as everyone standing around. But I think Ents could offer something a bit more to it

Despite this attempt by Trinity Ents to be more inclusive, diverse and cost-friendly, perhaps unfairly, much of an Entertainments Officer’s legacy relies on the success of Trinity Ball. Rowley clarifies the difference between his and MCD’s role and what as Entertainments Officer he can do to influence to organisation of the biggest night of the year: “The Trinity Ents Officer organises events for the students’ union, which does include Trinity Ball, the actual organising of which is outsourced to MCD. I liaise, I set it all up and, in general, I can control and veto the artistic direction.” Pushed as to what exactly his artistic direction would entail, Rowley reveals that he wants “headliners of big bands and stages full of bands”. He admits that “it’s not to say there won’t be a dance tent full of electronic music, but we have three other tents of other things. I would prioritise getting as many bands for the main stage as I can and the same goes for the second stage”. “I’m keeping tabs on quite a bit and thinking about it all the time. Like you said, there’s a lot of pressure and reputation on me picking some good artists”, he adds.

Beyond nightlife and Trinity Ball, Rowley sees Trinity Ents as an entity that can bring the other factions of the union to life: “Ents is seen purely as a recreational activity, and if we can manage to put [the other areas of the union] together for campaigns, then I think that that is one things Ents could help do to improve student movements. The reality is, when it comes to organising a protest or rally, you could do it as everyone standing around. But I think Ents could offer something a bit more to it. If I can find a way to make a Mad Hatter tea party coupled with rap, I’ll find a way to make Fossil Free TCD outrageous”.

Reflecting on his memories of his first Freshers’ Week, Rowley remembers “being in one of the society rooms, and they were doing a screening of Terminator. I sat down beside four randomers, and they ended up being my best friends in college”. Adding to this, he advises that this year’s freshers to jump in and get involved with as many societies as possible: “You will make great friends in your course, but there is so much going on in Trinity, not just from Ents. Half the crap that are people’s fondest memories of college will not be Trinity Ents, will not be class nights out. They’ll be the strange activities when you go to the weird stuff you can only go to when you’re in college, so take your opportunity”.