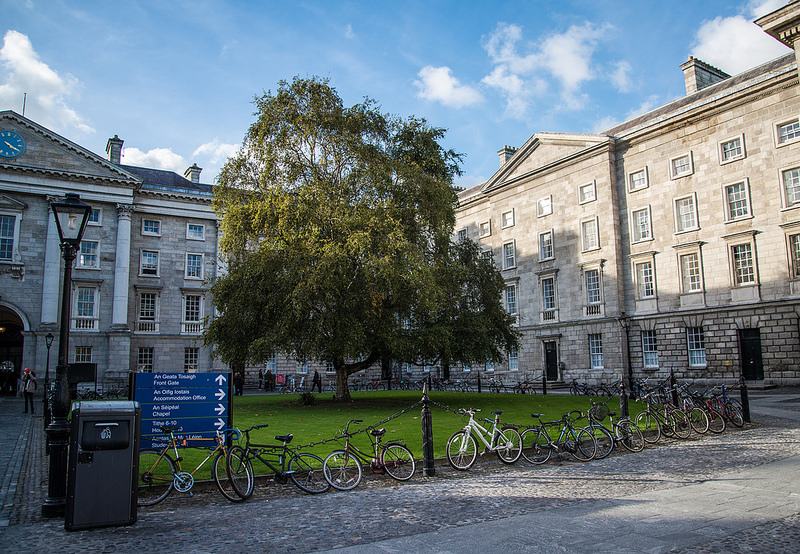 My own first week at Trinity was fairly standard by all accounts. I attended a few of my orientation events, though probably not as many as I should have, and slept in instead of attending the Provost’s address to first-year students. Even this was too much commitment for friends of mine. But were we missing things that were vital for our transition to Trinity?

The new Transition to Trinity Officer, Eimear Rouine, would certainly agree that we were doing ourselves an injustice by not attending. Her own days as an undergraduate at University College Dublin (UCD) were roughly similar, where students had little knowledge of the services available to them. Now, in her new job, she wants to tell students: “This is all here for you, and college is here for you as well.”

Speaking to The University Times, Rouine is clear on the value of a good transition to college: “Your successful transition should look like belonging, that your students belong to the college community.”

So how do you ensure that students undergo a successful transition? A lot of it comes down to communication, Rouine says, “which is something in the past we haven’t been brilliant about doing, so that’s kind of an easy place to start, and we’ll be able to monitor if the engagement did pick up and to see it working”.

The work is already happening here, people are doing great stuff, it’s just I don’t think students know about it

Indeed, one might be tempted to ask why students need a transition to trinity officer in the first place. There are already a litany of services that students can avail of if they’re facing any particular difficulties during their first week of college, from the Student Counselling Service, to Student 2 Student (S2S) to the College Tutorial Service. Rouine acknowledges this: “The work is already happening here, people are doing great stuff, it’s just I don’t think students know about it.”

Part of her job, then, is to improve an often overwhelming orientation system. “It’s a lot to take in because after that they’re sort of on their own, so we want to make sure that they can get this information again where they need it, so I’ll be doing a lot of research over the next four months or so into best practice elsewhere, and what works and what doesn’t work, with the hope of being able to make some changes next year”, she says.

Transition officers are becoming increasingly common in universities. While the US has led the way in providing such support to first-year students, a number of UK and Irish universities have, in recent years, began to recruit people with the specific purpose of easing the entrance of students into college.

University College Cork (UCC) began taking transition seriously in 2007. Speaking to The University Times over email, their First-Year Experience Coordinator, Noirin Deady, emphasised the difficulties students have in moving from secondary school to higher education: “First-year students, for the most part, are ill prepared for university life. They experience personal challenges ranging from culture shock due to the diversities of the previous and the present environment. Often they have unrealistic expectations and fear the unknown. Depending on their home environment and setting, the physical and social environment of the university can be intimidating for some, overwhelming for others and very exciting for most.”

UCC’s project hasn’t been without success, with retention rates at 93 per cent, which are the highest in the country. Deady, who actually sat on the interview panel that hired Rouine, puts this down to the strength of their transition programme. “We recognise that transition is a process, that it takes time for students to settle into university life so we continue to extend orientation activities throughout the first year”, she says. Every year Deady interviews any students who choose to drop out: “We talk about options and goals and look at the many ways of engaging in education. Students feel supported when they leave and this is the main reason they return the following year.”

While Rouine focuses on the need for improved communication from College, Deady brings up the old scourge of helicopter-parenting as one of the reasons first-year students find transition difficult: “Students are handing over the responsibility of choosing courses to their families, and, consequently, they end up in the wrong programme. Many students don’t have time to research programme content properly because of the pressure to achieve the points.”

One of the best institutions that is currently in place to support students in College is the Tutorial Service, which all students are encouraged to engage with throughout their time in Trinity. Commenting on the new role, Senior Tutor, Dr Aidan Seery, said that “the demands on the role and the person will be difficult”. Indeed, these concerns were expressed at Student Life Committee in February by Seery’s predecessor, Dr Claire Laudet, when the creation of the role was being discussed.

Seery, however, was hopeful that the role would contribute positively to the initial student experience of Trinity’s “new language, customs, rituals and demands”. The transition officer will “not be able to remove all difficulties or challenges and nor should this be the case”, but “we can try together to help and support a deeper understanding of self by helping to negotiate difficulty and helping students to see the way in which challenges can be moments of growth and good change”, Seery said.

You’re 18, you’ve just got off a bus from Mayo, you’ve nowhere to live yet, and you don’t really know anyone coming to Trinity. What are you going to do?

Rouine is under no illusions that she can provide a fix-all solution to the diverse problems students face. “I don’t think you can have a complete one-for-all. Every student isn’t going to go through the exact same first semester. But the problems and issues that students face do tend to be quite similar”, she says.

Some of the challenges that a transition officer can address, however, are universal: “It could be you’re 18, you’ve just got off a bus from Mayo, you’ve nowhere to live yet, and you don’t really know anyone coming to Trinity. What are you going to do? Or you could be 35, two kids, coming back to college. You’re coming from very different backgrounds and very different places, but you’re going to be having the same struggle of ‘I don’t know how to write an essay, how do I use the library, I don’t feel like I’m fitting in here, I don’t feel like I’ve made any friends.’”

While Rouine’s brief does not yet extend any further than students transitioning into Trinity, she is hopeful that perhaps the role could be expanded to include support for fourth-year students leaving Trinity. This would, of course, involve working with the perennially under-funded Careers Service, who were recently forced to end their one-to-one interview service with graduates.

The service, however, also works with first-year students facing difficulties in college, the Director of the Careers Advisory Service, Sean Gannon, tells me. Speaking to The University Times, Gannon says the service sometimes has to deal with “students who are coming into first year and make the wrong choice”. Gannon emphasises the value of the new officer, pointing to the “very different learning environment” and the “very different culture” first-year students will have to get to grips with upon entering Trinity.

Funding is, of course, the central challenge facing the new position. How do you expand and stimulate existing services that are already operating under severe financial pressure? Or, put another way, can we justify a transition officer role when these services are already being cut every year? “Hopefully, if you’ve done transition right, you’ll catch a lot of people who would be going to the services independently. If you can catch them before that becomes necessary, so you make sure you’ve hooked someone up with their mentor long before they need to go to counselling, so the idea would be that a good transition programme will help alleviate some of the pressure on services”, Rouine says.

Rouine will be working primarily with the Dean of Students, Kevin O’Kelly, to develop a better transition programme. The role, however, currently only has funding for the next three years, and it’ll be up to Rouine to prove the monetary value of a good student transition. For the first year, the role will be funded from the office of the vice-provost, while funding will come from the Corporate Services Division for the following two years.

Speaking to The University Times, Vice-Provost, Prof Chris Morash, said: “I suppose what we’re trying to do is go beyond the the things that universities have done for the last number of years, which is to have an orientation week and so on, but to make it more of an ongoing process.”

“I think what we really want to do is make our approach to this research based, looking at the best practice in other places, and see how we can make this transition as good as we possibly can”, he added.

The next few months will see Rouine work on how to replicate the best practices in Trinity and ensure the best possible transition for students: “I want to make sure that people don’t feel overwhelmed, that they know they can get help and that we actually have a programme.”