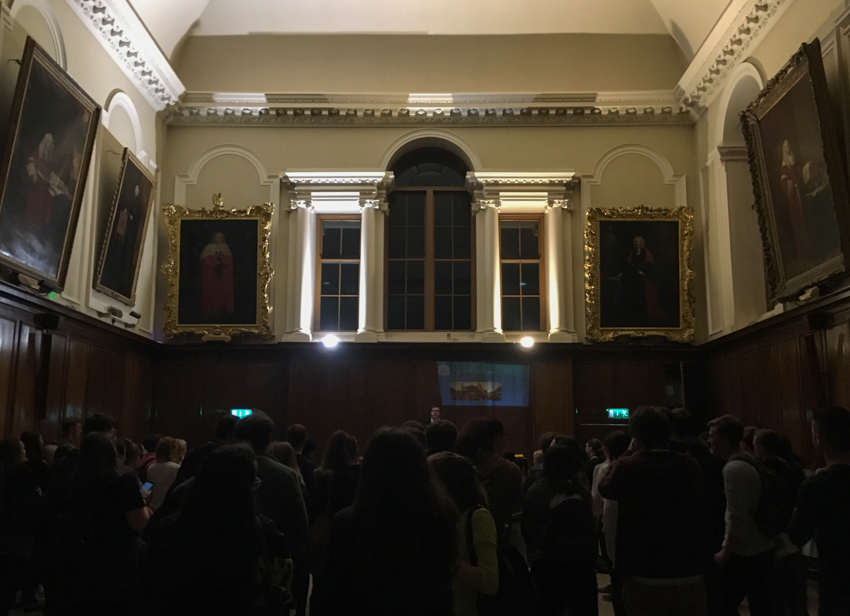 This week will see the launch of a variety of Trinity College Dublin Students’ Union (TCDSU) initiatives, taking place from the Pav to Trinity Hall. Last night, the launch of TCDSU’s Campaign Hub offered students ample opportunity to get involved in projects that they feel passionately about, in the form of lobby groups.

With an unexpected 300 attendees, and more joining in the afterparty at the Button Factory, a strong sense of positive change flooded the the Dining Hall. This opportunity for involvement will extend far beyond the night itself, with many other events planned. The evening provided an introduction to the various lobby groups that have been set up, with campaign leaders illustrating their plans for the year, and offering helpful insights to those present about how to get involved.

TCDSU Gender Equality Officer, Rachel Skelly, will run a campaign to help discuss a range of issues across all genders, including one which aims to raise awareness of young men’s mental health. Suicide rates have soared in recent years, and men account for 80 per cent of such deaths.

With Skelly emphasising that more discussion of the issue is needed, it seems that the union has quickly tapped into the importance of addressing the issue, especially within student populations. Another event organised by Skelly will be a discussion on sex and, more importantly, “good sex”. This campaign will supplement and support the work of the consent workshops, which ran for the first time in Trinity Hall during Freshers’ Week.

Speaking to The University Times after the launch, Skelly described the night as a “great opportunity for students from all over college to get involved” in the union.

Acknowledging that it can sometimes be “intimidating” to join a campaign, she said the night showed “people you can get involved at any point”, and that after speaking to numerous students after the launch, she was “excited” for the year ahead.

Claire Dowling spoke about the “Scholars at Risk” programme, which launched in Ireland in 2009. The programme consists of a network of universities who provide safety to scholars fleeing persecution. Dowling referenced the group’s effort to support refugees, and provide support to academics from across the world.

One of the highlights of the evening, if not the most surreal, was the Fossil Free TCD talk. Last year’s chair of the Trinity Environmental Society, Áine O’Gorman, who helped to lead the divestment campaign during its early stages last year, described the global repercussions if we continue to invest in the fossil fuel industry. O’Gorman, wearing the latest Fossil Free TCD t-shirts, encouraged the audience to support their campaign calling on Trinity to divest its €6.1 million shares in fossil fuels.

O’Gorman clearly highlighted the need for this campaign until a rude awakening from Cillian Crosson (or “government de facto” representative), who caged her in a bamboo prison to ironically reflect the archaic pessimism which still flouts the group’s efforts.

Next weekend, TCDSU and Fossil Free TCD will be leading a “Student Activism” weekend and are encouraging all to join. This weekend will highlight the work of campaigns and outline how to set up a political movement. Trinity’s experiences will be offered with many UK Fossil Free university associates also offering their tips on their success stories. Many Irish student delegations are anticipated to attend and Trinity students are encouraged by the Fossil Free TCD and union teams to join. Other campaigns highlighted over the course of the evening included the work of the Welfare Committee, presented by Leah Moloney and Laura Grady while the work of Trinity Amnesty was presented by Emma Dooney.

On the night, TCDSU LGBT Rights Officer, Sean O’Carroll, emphasised the importance of supporting the LGBT community in college, highlighting the importance of raising awareness of the various identities on campus.

The night effectively created a positive approach to change, and reminded students that they have the power to affect it. Speaking to The University Times over email, McNulty stated that he was thrilled with the attendance, stating that it “was great to bring all the disparate strands of SU campaigning together and to see what Trinity students do to advocate for change”. With this in mind, it was clear that McNulty was feeling positive for the coming months: “I hope it’s the start of a new time in the SU for campaigns.”