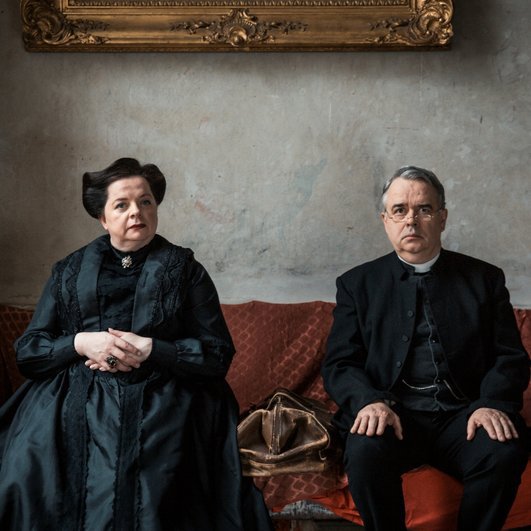 To Hell in a Handbag is part of the oddly fascinating setting of a play within a play. Following in the footsteps of Kiss Me, Kate and the uber-meta Rosencrantz and Guildenstern Are Dead, writer-performers Jonathan White and Helen Norton attempt to breathe new life into an Irish theatrical classic with a humorous look into the secret lives of minor characters as part of the Tiger Dublin Fringe Festival. The pair play Canon Chasuble and Miss Prism from Wilde’s The Importance of Being Earnest – pillars of Victorian society in public. But what happens behind closed doors is sure to surprise you in a farce of false identity, blackmail and, most importantly, money.

While the stately tone and manner is preserved, the preoccupations of The Importance of Being Earnest’s inhabitants are simply too inconsequential compared to what predicament the characters here find themselves in. Exploring previously established worlds in theatre can feel like a step back for some in terms of creating new work, but a modern perspective can lead to tackling issues originally left to the side, making the choice of upgrading minor characters to central ones a cohesive one. White and Norton seek to answer clues left by Wilde in the text about these characters to flesh them out while following historical guidelines of the time period and, as is appropriate for the form, stretch the audience’s imagination in bringing them into the private lives of two familiar fictional people.

This new piece of work was created in collaboration with Fishamble’s Show in a Bag. Established in 2010, the initiative was designed to help small scale (usually one or two people) tourable shows that would showcase the talents of the performers. It’s a support system that fosters the creativity of the artists through providing dramaturgy, rehearsal space, marketing advice and a venue for the first performances, giving creators the means to practically bring an idea to the stage. Show in a Bag has produced many successful works over the past few years including the acclaimed Dublin Oldschool and Beowulf: The Blockbuster.