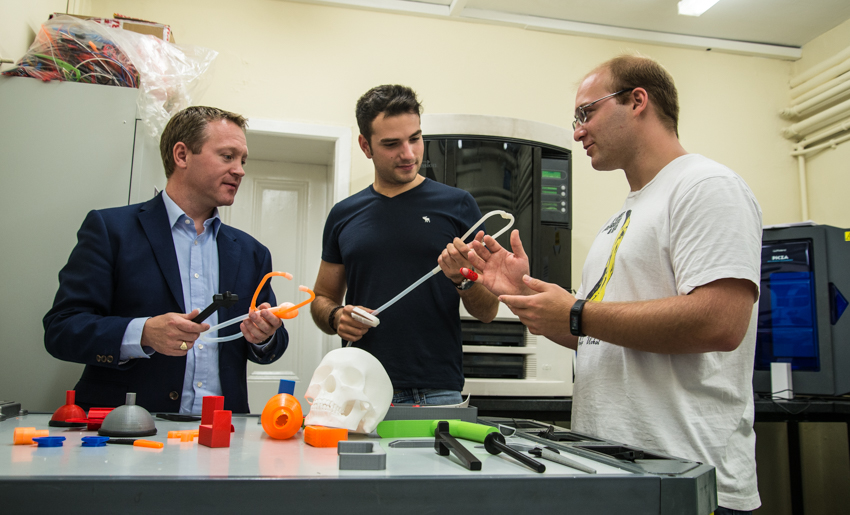 Trinity has often prided itself – and been celebrated – as the foremost university in Ireland in terms of innovation in education. Indeed, in many ways it has excelled. For one, as a recipient of the bronze Athena SWAN award, the College was recognised as a pioneer in encouraging women in education and research in science, technology, engineering, mathematics and medicine (STEMM) fields. Even the university’s mail room has been highlighted by Postal and Logistics Consulting Worldwide as the country’s best. Despite this, in some areas the devotion it shows to its historical heritage is more prevalent in the almost strict adherence to traditional teaching methods.

Conor Buckley, Assistant Professor in mechanical and manufacturing engineering, had this in mind when establishing Med3DP, a student-led project creating on-demand medical devices using 3D printing technology. Formed as part of the Design and Innovation module within the MSc in Bioengineering, which trains engineers to enter the medical device industry, the project straddles both engineering and medicine and is inventive in its multidisciplinarity. A focus on humanitarian work is also at its core, as Buckley says that his inspiration came from “an article by a doctor from the Gaza strip where they couldn’t get supplies in there due to the blockades and they started 3D printing some medical devices”.

The devices had to be original, meet a clinical need and, simple as they would later be, uploaded to a website and made available to download by anyone with a 3D printer in the world

Buckley, who did his PhD in biomaterials, ceramics and bone implants, has always had a connection to technology in his research. As an academic accustomed to implementing cutting-edge technology into his research, merging his passion for 3D printing with his modules was a logical and exciting step: “The engineer in me really came back into this program. I bought my own 3D printer about two years ago, and it came as a kit. I spent all Christmas putting it together and it’s still down in the lab.” Buckley notes that his lab was supported by contributions from his department head and colleagues, saying that “I think we got something like €18,000 in total, and I basically worked out that we could afford five machines, some tooling and we found bits and pieces too”. This prototyping facility became known as BuildBase, where students could test and amend designs, but Buckley asserts that even while setting that up, Med3DP was in his head.

Above the whir of a 3D printer, Buckley and two of his teaching assistants, Tomas Gonzalez Fernadez and Pedro Díaz Payno, explain the structure of the module. “The task really was quite open”, Buckley says, “but it was to design and develop new medical devices that could be used for humanitarian healthcare”. The devices had to be original, meet a clinical need and, simple as they would later be, uploaded to a website and made available to download by anyone with a 3D printer in the world. Originality was keenly pushed, and Fernandez points out that if the students were inspired by a pre-existing design, they had to modify it. Each student received an anonymous survey, seeking out those with design skills, leadership skills, and medical students. Buckley and his TAs then created six teams with a design student, medical student and leader student present. Buckley points out that having the medical students was an essential detail as “they brought another dimension to it, so when they were prototyping their ideas they were able to engage with the hospitals”. The final task was a presentation of each group’s project, with students explaining why it was designed in such a way, why it cost so much and how an average person would use it.

They’re using it in aerospace, for airlines, car industry, medical devices. People don’t realise this but the entire medical device industry is moving toward 3D printing

The focus on both invention and modification is clearly represented in the devices produced by Med3DP, with each one showing a remarkable attention to detail. A tweezer, for example, printed with finely serrated edges to enable better gripping, was sent back for revisions after Buckley thought “it didn’t feel right”, while the team produced a flexible material for tourniquets. Attention was always paid to practicality as “there’s a difference between functionality and usability”. Some devices are entirely innovative, such as the haemostatic clamp, designed to clamp open wounds shut with one hand, something which Buckley seems confident doesn’t yet exist in a 3D printing design sense. Even their website is original in open-sourcing their designs to the public and offering instructions on how to assemble and use them.

Particularly noteworthy is the stethoscope, comprised of two orange 3D-printed parts connected by generic tubing, surprisingly elegant and lightweight and just as functional as a standard model though only a fraction of the €200 price, coming in at around €1.50. Fernandez points out that even the GPs they consulted with agreed that the comparison with commercial stethoscopes was extremely impressive, with Buckley noting that “some of the consultants struck a deal with [the students] when they were going to assess: it was that our guys had to make them a couple of them”.

The printers the team use are on the more affordable end of the spectrum, costing between €2,000 and €2,500, but their sights are firmly set on more advanced technology and, consequently, more ambitious projects. The lab is due to receive a printer that works in metal costing €1 million, but already the global 3D printing industry has expanded beyond that. Rather than declining, as becried by numerous publications and online forums, the technology has been put to use solving humanitarian issues. “They’re huge machines, and they’re pouring cement, and they’re building buildings like that in developing countries”, Buckley notes. “They’re using it in aerospace, for airlines, car industry, medical devices. People don’t realise this but the entire medical device industry is moving toward 3D printing.”

You had medical students suggesting they visit doctors for feedback, and then designers going out and meeting with them and working together, and that’s how real life works

As evident in the project’s name, benefiting the medical industry is already closely linked to the technology it centres on, but it is only one learning outcome that Buckley envisaged from the project. Feeling that universities train engineers for industry rather than society, he saw a gap in the knowledge and skill sets of current students and understood that it had to be addressed: “We had medical students who had never been exposed to 3D printing. We had engineering students who’d never seen it before. So I wanted to give them exposure to it and this was a good methodology for that. I wanted teamwork, I wanted multidisciplinary work, people with medical backgrounds working with engineers, designers, so they could understand and start communicating with one another. And for me, the nicest thing to see in it were the different dimensions different students brought to the program. You had medical students suggesting they visit doctors for feedback, and then designers going out and meeting with them and working together, and that’s how real life works.”

To enable such successful collaboration, creative teaching methods were necessary as well as technological invention. “A lot of the traditional engineering that we do involves going to lectures, reading from textbooks, labs and exams”, Buckley says. “There’s no exam in this. The exam was being a team, being [continually] assessed and presenting.” It was a model welcomed by the students, who took the initiative to present their devices at the Dublin Maker Faire. Fernandez adds that he kept a weekly diary of the students’ developments and the advice issued to them at each clinic and “at the end of the project I could see that 95 per cent of my advice was incorporated”. The novelty of their method is not lost on Buckley, who notes that “it’s a very different way of teaching, and I was definitely nervous being the educator in charge. I had to be careful, because at the end of the day we had to come up with a good way of grading the project. I wasn’t afraid to try either, because the module is called Design and Innovation so we were innovating, designing”.

The fact that I’ve had over 30 students involved in the Med3DP, the fact that they were giving up their weekends to present at maker faires – that’s success

When asked how he views the success of the project so far and where it could possibly go, Buckley says that, for him, it’s already a success: “The fact that I’ve had over 30 students involved in the Med3DP, the fact that they were giving up their weekends to present at maker faires – that’s success.” He adds that, of course, the aim would be to have more students, bigger and better machines, but “we’ll always strive to teach the fundamentals of engineering, and design iterations”. Central to this project is an understanding of failure as a necessary and useful tool in the engineer’s toolkit. Over the course of the six weeks that the module ran, students worked with multiple iterations of their devices, and not all of them made it to the finish line. “You know, there were devices that didn’t make it all the way, that we killed early”, Buckley says, but asserts that it was part of a grander lesson in the importance of failure. With such low running costs, a specialised lab and the near-endless resource of time, 3D printing allows a versatility and opportunity “fail fast and fail early”, which Buckley sees as “the secret to engineering”. In this sense he is giving his students a gift rarely found successfully in the classroom: courage. And as he notes: “Being a champion is how quickly you get back up.”