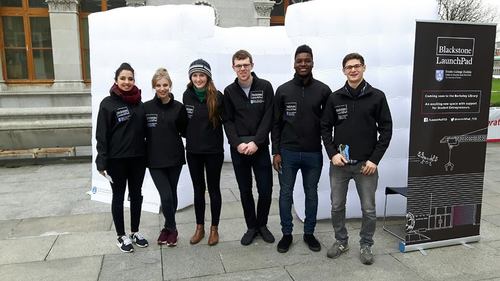 Students launching Blackstone LaunchPad outside the Berkeley in February
TCD

After a successful pilot this year, LaunchPad Sprints, a micro-accelerator programme for Trinity students, will return next year.

The programme, which ran for two weeks from November 17th to December 2nd, allowed students to develop entrepreneurial skills over five short sessions. Eight teams took part in the programme, with students allowed to participate by themselves or as part of a team.

Stuart Fergus, Programme Manager at Blackstone LaunchPad, spoke to The University Times about the development of the programme: “We were deciding and brainstorming how we could better engage students here with the LaunchPad programme.”

Blackstone LaunchPad is a branch of LaunchBox, Trinity’s accelerator for student startups, which runs for three months during summer. LaunchPad started in February and has a hub in the Berkeley Library where students, alumni or staff can gain support in developing startups and encouraging entrepreneurship.

According to Fergus, it was important to create a programme like LaunchPad but in a reduced scale, so that more students got involved. He added that he hoped students would sign up to LaunchBox following Sprints as “they have a better idea of what Launchbox involves before they commit their summer to it”.

Eight teams were selected from the nearly 20 applications that took part in an online application process.

The sessions involved students learning from students who had participated in LaunchBox previously, with their ideas being judged by experts from Bank of Ireland during the fifth session. “It was just over two weeks, and they had to present their final idea in front of the judges at the end of that”, Fergus said.

Despite being on a smaller scale than other accelerator programmes provided by Trinity, “they still got a taste of what we do and what a taste of entrepreneurship is, or we also had two social enterprise teams as well”, said Fergus.

Fergus said that feedback from the eight teams has been very positive and that students “really got a lot out of it”.

“What we would like to see from this is to, based on the success of this one anyway, roll this out again, maybe have three through a given academic year”, explained Fergus. He spoke about how, going forward, they “might modify” the programme.

Fergus suggested that the programme could be developed to create a number of themed versions across the year, or reduce the number of sessions involved in the programme from five to four.