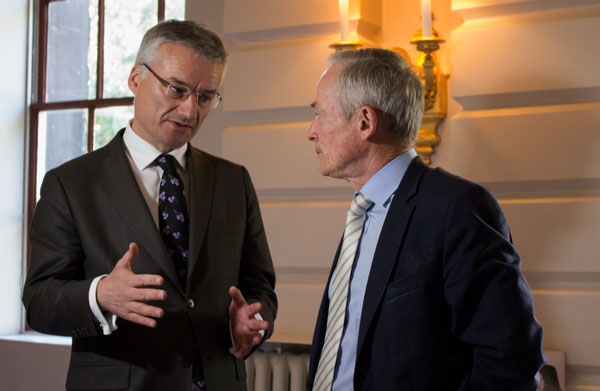 Trinity’s Engineering, Energy and Environment (E3) Institute has received the largest-ever private donation in the history of Ireland, with a €25 million gift from long-term College donor Martin Naughton.

The landmark institute, which Trinity has been promoting to potential donors for months, will also receive €15 million from the government – one of the most significant state investments in a Trinity project in recent years.

With the project estimated to be finished in 2022, Trinity will submit for planning permission for the construction of E3 later this year. The institute, which will foster interdisciplinary learning as a partnership between the Schools of Engineering, Computer Science and Statistics, and the Natural Science, will be located on the site of the biochemistry labs opposite the entrance to the Hamilton.

“I believe that the new institute will in time change how society solves the many challenges that the world faces and I don’t say this lightly. E3 is something new, and not just in Ireland but internationally”, Provost Patrick Prendergast said today.

A new on-campus teaching building is the first phase of the E3 project, which will cost €60 million in total. The second phase will see a research building for the institute constructed.

As the rest of the country flocked to the polls to vote on whether to repeal the eighth amendment, staff, students and members of the press gathered in the Provost’s House to listen to the announcement of the philanthropic funding. Minister for Education Richard Bruton and Minister for Higher Education Mary Mitchell O’Connor both spoke, along with Prendergast and Naughton.

“An institute to harness new methods in learning and research at the frontiers of disciplines, to educate new kinds of engineers, new kinds of scientists prepared for the challenges of the 21st century workplace”, Prendergast said.

“Education is the key for everything. It opens doors and it’s such a terrific necessity globally for everybody”, Naughton said.

Speaking about his commitment to funding the project, he said: “We said we would support it on two conditions: number one that it was global, world-rated – it has to be the best. And number two that the department of education must support the project.”

Naughton, who sits on the Provost’s Council, is the Chairman of the Supervisory Board at Glen Dimplex Group, the largest manufacturer of electrical heating appliances in the world, which he founded in 1973. Martin received an honorary degree from Trinity in 1995. Naughton has a history of donating to College, providing funding for the Naughton Institute, which houses the Centre for Research on Adaptive Nanostructures and Nanodevices (CRANN) and the Science Gallery.

Minister for Education Richard Bruton said of E3: “This project undoubtedly stands out.” He commended “its potential impact” to create “hubs where young talented people can use their scientific knowledge to create enterprises that transform the way in which we live”.

The E3 strategic report, released in 2012, claimed that this coalition of “aptitudes and specialities will be unprecedented in Ireland and among the first internationally”.

Two years ago, it was revealed that E3 was the “flagship project” of the College’s fundraising campaign, aiming to raise €40 million. Speaking to The University Times at the time, Dean of Development Gerard McHugh emphasised the importance of this type of philanthropy in financing large projects, stating that “you would hope that philanthropy would be 20 per cent of something”.

E3 was originally planned to be based on Trinity’s new Technology and Entrepreneurship Campus, the funding for which is yet to be fully secured.