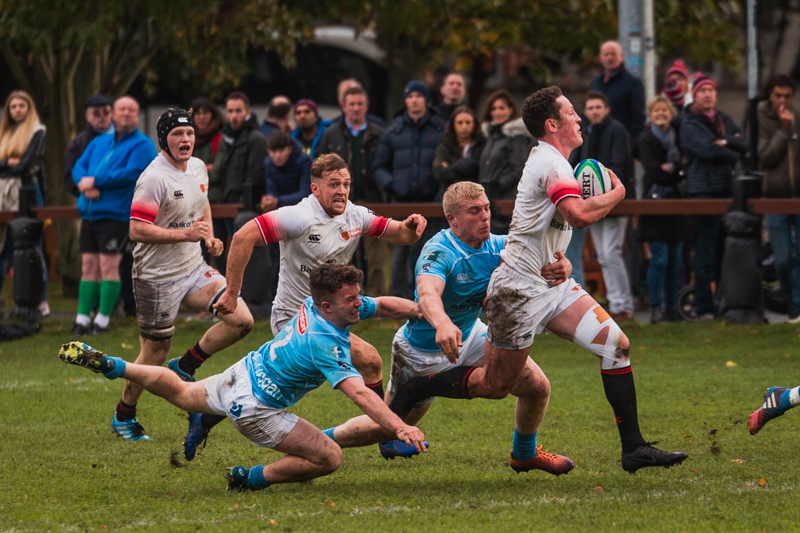 Dublin University Football Club (DUFC) Men earned their first win of the All-Ireland League (AIL) season in convincing fashion this afternoon, securing a 39-17 victory over Garryowen and registering a bonus point in the process.

After defeats in their opening two games, to University College Cork and University College Dublin, DUFC began today’s encounter with some nervousness. Garryowen were also guilty of early handling errors, but kept it tight and used the physicality of their pack to pressure the Trinity defence. Out-half Dave McCarthy was on song, directing operations behind the scrum and exploiting spaces in behind.

And if it seemed like the visitors had suffered a blow when scrum-half Rob Guerin was forced off with injury, it didn’t pan out that way. His replacement, Evan Maher, proved a catalyst for the first score of the game, intercepting a misplaced offload by Trinity’s Patrick Hamilton before finding an excellent pass to release Tommy O’Hora for Garryowen’s first try after 15 minutes.

Falling behind their travelling opponents forced a reaction from Trinity. Flashes of their typical brand of fast-paced, running style of rugby began to emerge, but handling errors caused by the damp conditions continued to cost them.

In the face of an extremely physical Garryowen defence, DUFC needed a moment of magic to turn the game. They got it through full-back Colm Hogan, who showed supreme skill in space to step past the defensive line before releasing Ronan Quinn to finish smartly in the corner.

The opening try from DUFC opened the game up after the tentative early stages. Both sides had chances to seize the lead, but the handling errors present in the opening stages continued to plague both sides. Quinn and Max Kearney both fell foul of the greasy surface as opportunities to move ahead went abegging.

In a game that was suited to attritional play up front, Garryowen had their powerful front row to thank for a try that put them in the lead once again. McCarthy had time to release Bryan Fitzgerald through a huge gap in Trinity’s backline, and the barreling centre slid over for a simple score under the posts. Full-back Jamie Heuston continued to impress, slotting home the conversion to put Garryowen seven points clear with half-time fast approaching. 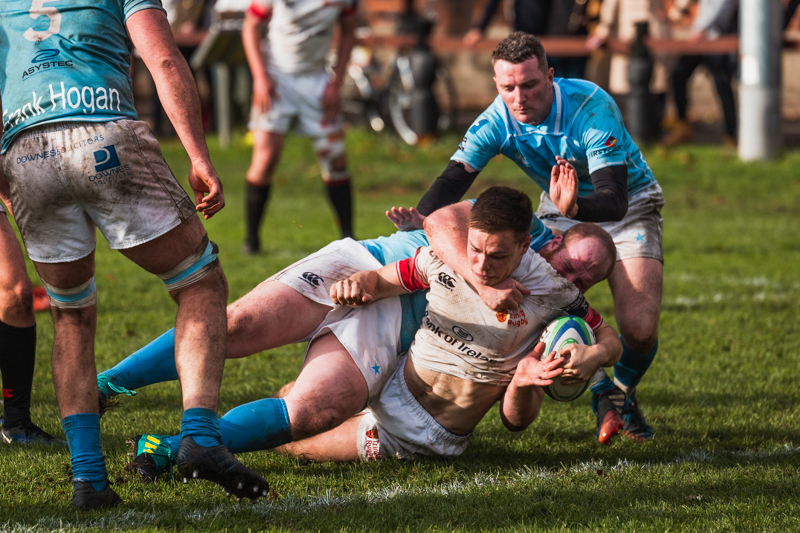 But Hogan stepped up once again for Trinity. In recent times he’s very often been the one Trinity have turned to to make something happen, and it was through him that the hosts bit back once more. He showed superb awareness to reverse the play after some sustained Trinity pressure in the 22 and threw a beautiful skipped pass to Rob Russell who scored his first try of the season. Trinity 10 Micheal O’Kennedy, kicking a difficult conversion from right on the touchline, found his range to level the scores.

O’Kennedy added another penalty kick to his points total just before half-time, making it 17-14 to the hosts at the break.

Trinity, then, had weathered the storm and as the second half kicked off, Garryowen’s bruising approach seemed to be taking a toll: they looked sluggish and tired. Trinity, for their part, began to show flashes of what they could do, as line breaks came with increasing regularity.

It wasn’t a surprise that Hogan was involved again in the try that put Trinity further ahead – and this time he turned scorer. After the pass of the game from back-line substitute James Fennelly, Hogan brilliantly fought off two defenders to get a well-deserved try in the corner. O’Kennedy’s conversion was wayward, but Trinity now had all the momentum against a fatigued Garryowen side.

But the visitors didn’t throw in the towel: looking to strike back, they attempted to match the hosts’ free-flowing rugby by getting the ball as often as possible into the hands of the talismanic Heuston, who very nearly created enough space for McCarthy to score and bring Garryowen back into the game.

Despite the best efforts of the away side, however, it was Trinity who continued to dominate. O’Kennedy struck his second penalty of the game over from directly in front of the posts, after impressing with a tactical kicking game that kept Garryowen pinned deep in their own territory.

As the game wore on, Garryowen made changes to their front row in an attempt to force an opening. But it wasn’t to be, as Trinity’s defence held firm to quell their advances. Captain James Hickey and Liam Turner were instrumental in keeping the Limerick side out – Turner in particular helped out the Trinity back-row all afternoon, fighting through rucks and counter-rucks in order to secure Trinity ball or slow down Garryowen’s.

As the game drew towards an inevitable Trinity win, Hickey smashed over the line to secure a deserved try, before substitute Arthur Greene registered his first try of the season after yet more good work from Hogan.

The game became scrappy again as the game entered its closing stages, with both sides picking up yellow cards due more to tiredness than any cynical attempts at gamesmanship. Garryowen fought in vain for a bonus-point try, but Trinity weathered the late advances.

Today’s was a feel-good win for Trinity after a disappointing start to the season. Tony Smeeth and his squad can take a lot from this performance. With a first league win under their belt, the goal will be to build on today’s result as they seek to put a tough start behind them.

Their next encounter, however, will be a difficult one, with a trip to Lansdowne. Last season, they lost the corresponding fixture 66-33. 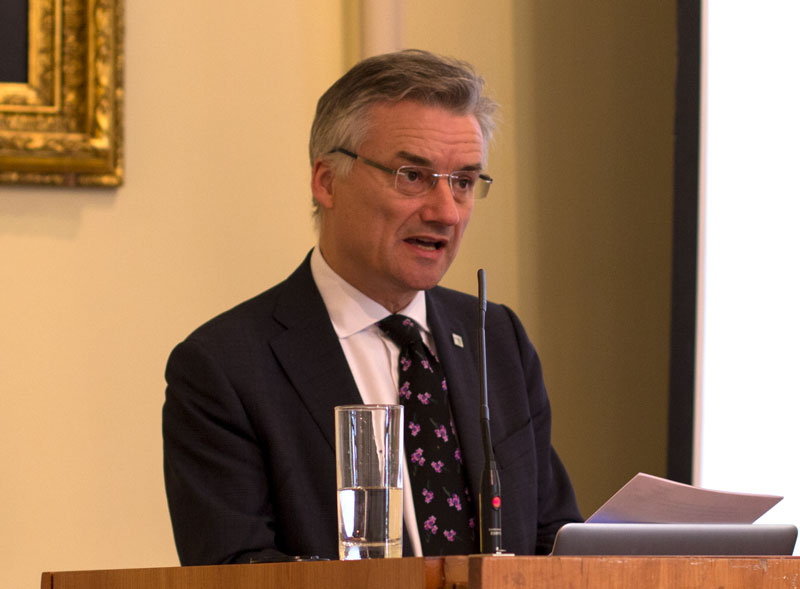 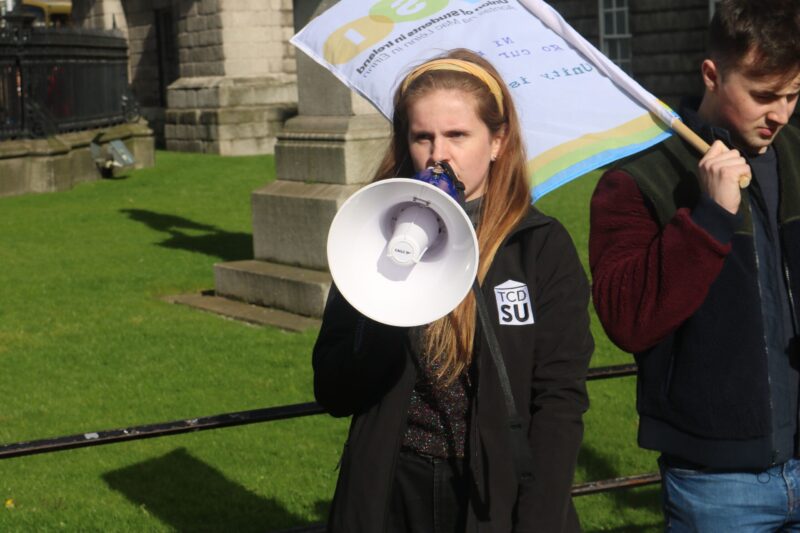