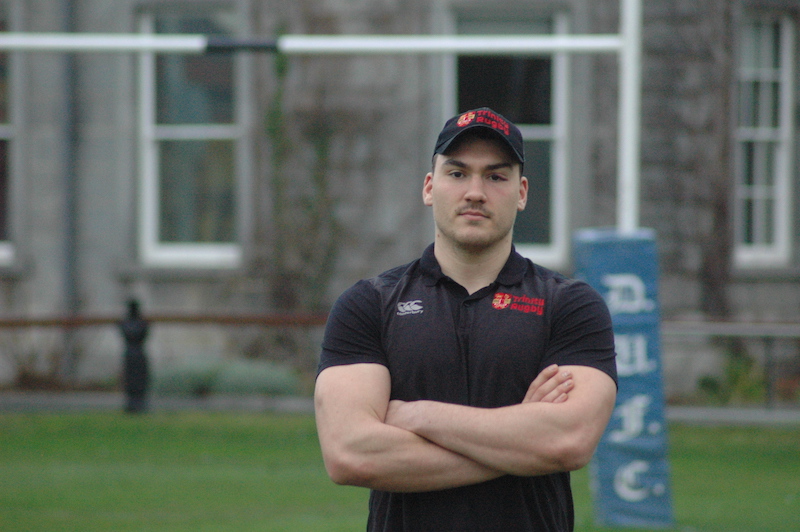 Bart Vermeulen is an imposing man. It’s a Friday, long before the outbreak of the coronavirus, and he’s arrived back to College having spent a week training with Leinster. There, he rubbed shoulders with some of the top rugby players in Europe.

Looking back on the week he’s just endured, he seems content: “It was very quick, and very intense, but also very enjoyable. They’re very welcoming, and you know, you just co-operate, because you have to work together in training especially.”

“I’m stepping into a new environment that I’m not familiar with, but I get a lot of help from the people there and from the coaching staff, and it just makes you get through it. It’s a lot of fun”, he tells me.

Away from Leinster, Vermeulen is a staple in Dublin University Football Club’s (DUFC) front row, playing at the highest level of amateur rugby in Ireland, week in, week out. His journey to where he is now, though, has been less than conventional.

It’s no secret that the vast majority of talent in the men’s game in Ireland comes through the private education system. A couple of years ago, while many of his DUFC teammates were in the throes of the Leinster Senior Cup, Vermeulen was playing as a number eight for his club back in Belgium.

It’s not something he was used to, coming from the continent: “It’s a bit weird, but I also enjoy the banter. It’s good.”

The prominence of the private schooling system in the talent production line is just one difference that Vermeulen noticed when he moved to Dublin almost four years ago. The tempo the game is played at in Ireland was notably faster. “The first thing I noticed is the running – the speed of the game is quicker. You just need to run. You have to be fit to play. The fitter you are, the more you enjoy the play as well.” Despite having played with Flemish selection teams and the Belgian national team, Vermeulen had to adapt quickly when he got his first taste of the game here.

Vermeulen moved up the ranks quickly at Trinity. He entered the fray at under-20 level, playing with the second team on the weekends. Just one year later, however, he had made the jump to the first team. He spent most of his second year making appearances from the bench, before breaking into the first team during the fabled 2018/2019 season.

The AIL always works on really small margins – a lot of games are very close, and last year we just got on top of those

“It was a great experience”, he says, looking back on the campaign that saw DUFC reach the play-offs of the All-Ireland League (AIL) Division 1A. “We were very young, a new team, so we really wanted to prove ourselves in the league. Everyone was training hard, showing up at training and preparing well for games.”

“The AIL always works on really small margins – a lot of games are very close, and last year we just got on top of those, in most of the games.”

In a lot of ways, Vermeulen’s career path has been as impressive as it has been unlikely. Coming from a country where people often confuse rugby for American football, the third-year BESS student consistently pushed himself when the few opportunities available to him arose. Vermeulen tells me how, interestingly, language barriers make advancing within the game in Belgium difficult.

“There’s a big thing of having a lot of the French-speaking part of Belgium being very much in control of selecting the [national] team. As a player from the Flemish part, I had to actually try and get in contact with them, and just show up at a training session to try and be included.”

Playing with his national team was one thing – but arguably the most pivotal moment in Vermeulen’s career came when he was at DUFC. He arrived at Trinity having played as a number eight since the age of 12. After a year of working with Tony Smeeth and the rest of the DUFC coaching staff, the decision was made that Vermeulen would make the switch to loosehead.

“That transition definitely worked in my favour”, he says. He’s right – not long after he made the transition, Vermeulen was playing senior rugby in the AIL.

Vermeulen contends that this emphasis on development and progression is at the core of DUFC’s ethos: “I’ve got great coaches who pay a lot of attention to not just the whole squad, but also pay attention to developing individual players.”

“You have four or five years to develop a player, to play for you at the top of their ability, so that’s basically their aim. Their aim is to develop players rather than to keep the club going with players that are, like, 32 or whatever, like some other clubs”, he adds.

It’s easy to see why the culture of nurturing talent that has grown up around College Park is attractive to Vermeulen. With fellow clubmen such as Ryan Baird and Rowan Osborne making the step up to provincial rugby with Leinster, his ambitions for a professional contract aren’t beyond the realms of possibility.

“It’s very awesome to see the step up from playing with Trinity to playing with Leinster is a possibility, and is not far out of reach.”

After getting his first taste of rugby at the highest level these past few weeks, Vermeulen has developed an appetite. He’s come a long way – but he doesn’t intend on stopping here.