In the era of social media-based marketing, meeting celebrities is often a disorientating experience.

But Rozanna Purcell, cookbook author, entrepreneur and model, has used her status to talk so honestly about her life that it is hard not to feel like you know her already. After sitting down with her for an interview, I can attest to this. Rather than fussing over how she looks in her photo, she bonds with our photographer over the great Nikon/Canon divide. And as she peppers her answers with the occasional swear word, I can’t help but think how the Miss Universe judges would shudder.

Purcell’s fame began on one of the most criticism-ridden platforms – the Miss Universe beauty pageant. But while the competition is often seen as the epitome of patriarchal oppression, she has gone on to fight against body shaming. She has unabashedly dedicated her career to challenging the very beauty ideals that arguably launched her career.

Through her work, she implores women to “Bite Back” (as her podcast is aptly named) at the beauty industry’s standards. Purcell has been widely praised for her willingness to talk openly about her past experiences with eating disorders. Her recovery allowed her to reclaim her love of food and inspired her to write bestselling cookery books Natural Born Feeder and Half Hour Hero. Her latest, No Fuss Vegan, has just hit the shelves.

I realised that maybe social media needs to change how it’s being used. I wanted to be someone who used it right

Purcell admits that putting so much of her life online can be difficult – she says it was only when she started feeling like she “didn’t want to be on it anymore and thought it was quite toxic” that she realised she had been concentrating too much on the lives of others. She found it funny that, having always told other people not to compare themselves to anyone else, she was “consumed by concentrating on other people through social media”.

But after contemplating leaving, she concluded that she would “rather be in the room and have something good to say, than be out of the room and not say anything at all. And I realised that maybe social media needs to change how it’s being used. I wanted to be someone who used it right”.

Her posts about her stretch marks, food guilt, bloating and lens distortion are genuinely uplifting, and shine a light on the reality behind social media’s unrealistic beauty standards. She admits that the more vulnerable you feel sharing something, “the more powerful it’s going to be”.

Purcell was outspoken during the 2015 campaign to repeal the eighth amendment, posting on Instagram about her support of female bodily autonomy and her plan to vote yes.

Asked why she uses social media to campaign for political change, Purcell draws an interesting distinction: “With the general election, I’m not an expert in the area. I know who I want to vote for, but you couldn’t put me on a debate panel either!” Referendums are more cut and dried for her: “I think with referendums it’s one issue, yes or no, and I’ll always be opinionated. I’m not afraid to say it. I’m not going to be afraid to lose followers.” 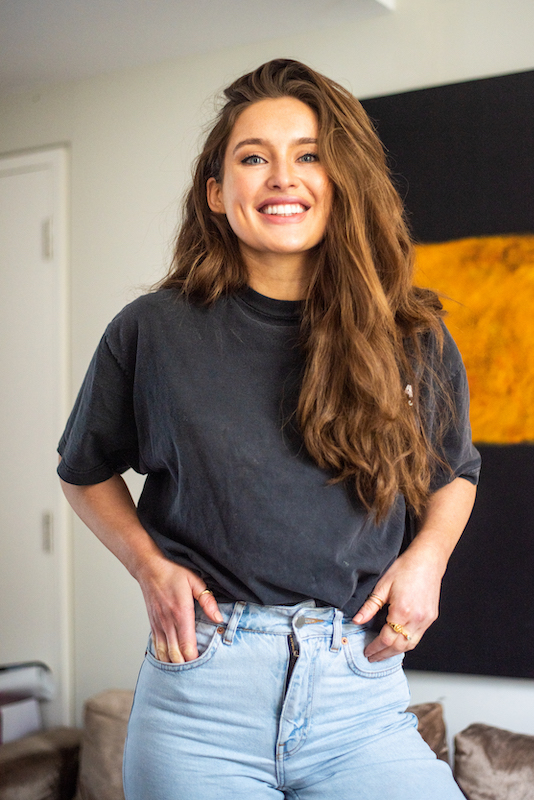 “I’ll always be opinionated. I’m not afraid to say it.”
Alex Connolly for The University Times

Purcell is a vegan, having opted to switch to a plant-based diet after a particularly moving, if unscheduled, visit to an abattoir. But the No Fuss Vegan author is careful to avoid preaching about her lifestyle, because “no one responds well to preachy-ness”. It is unsurprising, then, that she strongly disagrees with the perpetuation of food guilt: “I eat this way because it’s a preference, I enjoy eating this way. People shouldn’t feel bad about eating food. If they want to eat a certain way, that’s fine.”

She attributes the shift towards plant-based diets to an increased societal awareness of the emotional intelligence of animals. Her own move towards veganism was gradual, but the abattoir visit signalled a point of no return. But while she is completely plant-based at home, occasionally, “if there’s a scone with butter in it, I’m probably still going to have the scone”.

She is reluctant, therefore, to conclusively call herself a vegan, but she draws a distinct red line: “Will I ever go back to eating meat? No.”

The only activism she can see herself pursuing is environmental activism: “Of course there are so many important issues, but if we don’t have a world to live in, what else is important?” She wants to have “the knowledge to back it before I do it. There’s nothing worse than an activist who just goes off on one and doesn’t have any facts behind them”.

Will I ever go back to eating meat? No

After a career in modelling, Purcell now avoids buying fast fashion, because she says she wants to be on the right side of history and able to declare, “I actually didn’t support that industry”. She acknowledges, however, that “it is a really hard thing to move towards sustainable fashion, because fast fashion is so accessible to us – it’s so cheap, it’s so on trend … you see something online, you can buy it within five or six clicks”.

But she thinks it is a sacrifice worth making, and actually leads to more creativity within fashion: “I’ve found since I’ve stopped buying fast fashion I’ve become so much more fun and creative, and I’m actually wearing stuff I like more.”

Purcell originally moved to Dublin from Tipperary 11 years ago to study at University College Dublin. Asked what advice she would give to a young person starting out in university, she’s emphatic: “I’d say try to stay fearless for as long as you can … I don’t mean fear after a night out or anything … I mean take risks, keep taking risks, because the older you get the more failures you have, you do become quite fearful of failing. But failing is one of the best things you can do.”