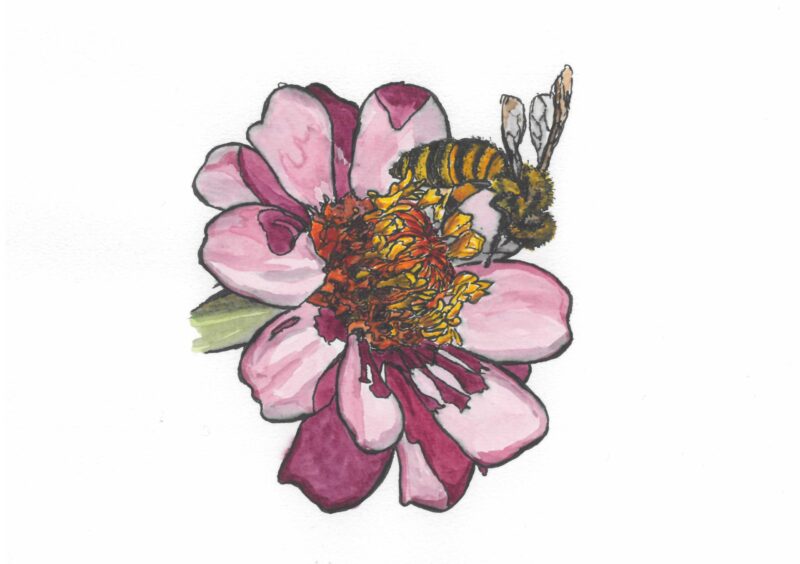 Amanda Cliffe for The University Times

The flutter of a butterfly’s wings, or the buzz of a bee – these sights and sounds are among life’s most basic pleasures. But more than that, they embody a pollinator–plant relationship that the planet depends on. The transfer of male sex cells (pollen) between flowers ensures the successful fertilisation of crop plants, facilitating the reproduction in 90 per cent of the world’s flowering plants.

The food industry is just one of the many that are heavily reliant on pollinators: in their absence, many industries resort to cheap labour for manual pollination. But pollinators aren’t just important for serving human needs. Hoverflies, birds, bats, bees, butterflies and beetles are crucial for forming and maintaining the habitats and ecosystems that many animals rely on for food and shelter. Maintaining them is a challenge that many are unaware of, but the answer for many lies in nature, and maintaining balance in our gardens.

For Trinity, the situation is no different – College has taken several measures to increase diversity and work to influence public discourse about the pollinators. In 2017, it launched a pollinator plan – run by Prof Jane Stout, a professor of botany – which contributes to the All-Ireland Pollinator Plan, a national framework with 81 recommendations that aim to protect Ireland’s pollinators.

Stout, who’s also the deputy chair of the All-Ireland Pollinator Plan, tells me that “in 2006, one third of the bee species were threatened with extinction and we felt the need to do something”.

The pollinator plan is clear: one should increasingly incorporate and be working with native species, which is what we are aiming to do

So Stout, along with Una Fitzgerald, set out to create a resource to help various sectors improve their approach to pollinators. “By conserving habitats for bees”, Stout says, “we also inadvertently protect other biodiversity”.

In recent times, Trinity has really made a point of pushing to protect its pollinators, John Parnell, the College’s senior dean and a professor of systematic botany, tells me. Parnell says “the pollinator plan is clear: one should increasingly incorporate and be working with native species, which is what we are aiming to do”.

Last month, the College asked the public to vote on turning the lawns at Front Gate into an urban wildflower meadow, a move that gained national attention.

The College has also just planted two Ginkgo trees – Chinese trees that can live for over 500 years – in Front Square, to replace the iconic Oregon Maples that came down in 2018. Unveiled earlier this month, the trees provide “an instant effect in a high-profile area for the public”, Parnell says. They’re also adaptable – a crucial attribute in a country whose climate is predicted to dry out in the coming years. 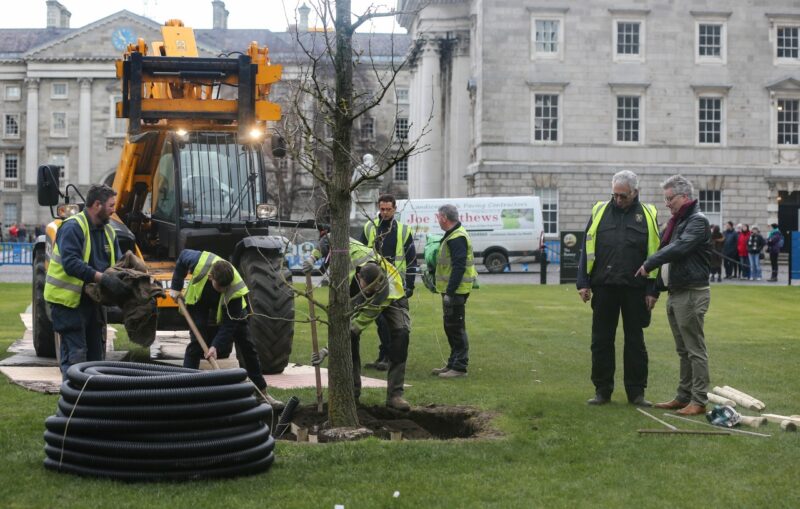 “Existing trees on campus are currently suffering from water stress”, Parnell tells me. “Ginkgo has survived shifts in the climate in the past and as Ireland is forecasted to have an increasingly drier climate, this robust, beautifully coloured tree provides a suitable choice.”

And in New Square, ringed by College residences, gardeners have just regenerated the lawns without the use of chemical weed killers – a first for Trinity – in order to avoid causing harm to insects, animals and the planted species themselves. Parnell tells me similar plans are in place for the revival of other lawns around the College: “Biodiversity will be accomplished using sites both on campus and off campus. For example, the woodland at Santry is being developed into a wildflower area, the Trinity Medical Centre at St James’ and the recent living plant wall in the New Business School.”

There are even plans to replant inside, he says, with the Hamilton “containing a wide range of plant species”.

In areas like Trinity’s Flat Iron, a range of spring flowers are in bloom – including blue anemone and early-flowering borage. Parnell explains: “Trinity is trying to incorporate work with native species where possible, although an important observation that can be seen is that not all areas in Trinity are native.”

Trinity is trying to incorporate work with native species, although an important observation that can be seen is that not all areas in Trinity are native

For Parnell, “sticking to exclusively native species may not be the best way forward”. He tells me that “Merrion Square, Botanic Gardens, St Stephen’s Green and Phoenix Park are all stuffed with non-native species”, adding that “in a public park type setting we should use everything in our power to boost insect numbers”.

“There are only 850 species native to Ireland, compared to over 400,000 species on the planet. So if we can extend the flowering season by planting something non-native, it can help with biodiversity while adding colour and a much more visually appealing area.”

But it’s not only in universities that efforts are being made to protect pollinators and promote biodiversity. Molly Aylesbury is the co-founder of Wildflower Walks, a company that aims to provide members of the public with information on native Irish wildflowers that they may not acquire otherwise. For Aylesbury, while bees get the most attention, all pollinators are important: “We have a lot more hoverflies than bees, and while bees are just as vital, it is important to remember the insects we often forget about.”

Aylesbury’s advice for improving our collective understanding of pollinators is simple: on something as basic as a walk in the park, taking note of what plants are flowering, and when, is valuable.

When it comes to gardens (and areas like Trinity), she says it’s important to “leave some areas bare without pesticides for digging bees, avoid disturbance such as mowing where possible, to allow important soil mycorrhizae and fungus certain species rely on to thrive, and, where possible, avoid cultivation of the land”.

Ultimately, it’s clear from Trinity’s efforts – and those of activists like Aylesbury – that protecting our pollinators is vital. Indeed, can we really say that a garden without insects is a garden at all? Like most things in life, appearances are only skin-deep: while leaving some areas bare and letting certain patches go wild may not be the most visually appealing concept, it’s a vital ethos to adopt if we’re to do our bit to increase biodiversity.