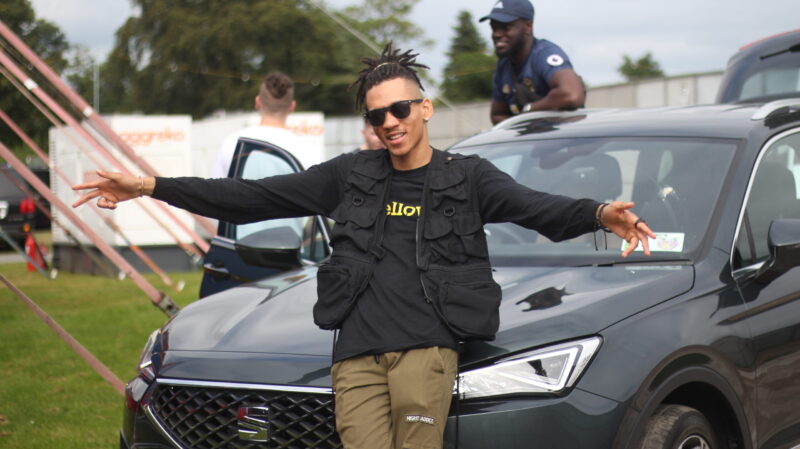 On Friday, March 13th, Dublin rapper JYellowL dropped his new single, “On The Estate”. Its release took place as public anxieties around the coronavirus reached fever pitch – and on a day unlucky even in normal times – but already the track has a respectable 10,000 plays on Spotify.

The work sees JYellowL at his more rapid-fire: he describes it as a fusion of a drill-type sound with a more hard-hitting trap element incorporated too.

“It shows a side of myself that I haven’t actually shown too much in my music recently”, says Jean-Luc Uddoh, the lyricist more widely known to audiences as JYellowL. The variance in the artist’s sound could be the result of the rapper’s collaborative endeavours.

While JYellowL has had an impressive following from his outset, partnerships on tracks with London rapper Aaron Unknown have allowed him to demonstrate his proficiency in the hip-hop scene to a wider audience. The pinnacle of such cooperation can be seen in 2018’s “Oh Lawd” – a breakthrough track for JYellowL in many ways.

The exposure for JYellowL didn’t stop there. In the same year, he secured a coveted support slot on Nelly’s Irish tour. Uddoh has since earned the privilege of being the only Irish artist featured on the FIFA 20 soundtrack – included alongside Major Lazer, Skepta and Foals. He’s also set to open for Nelly again on the rapper’s 2020 European tour.

“It was a good fit”, Uddoh says. “We had done it before and it worked, so I think that they were keen to give us more shows this time.”

The musician acknowledges that opening for such a well-known artist can be intimidating, especially with the possibility of genres clashing. For him, “you have to put confidence in yourself and just believe these songs will work because they are great songs – not because they are more suited to this sort of audience”.

His new single, arguably his most abrasive yet, was a natural progression, he says. “It has a lot to do with coming into myself as an artist.” The 21-year-old has always made a point of staying true to himself, with each release holding a personal meaning: “The different music I’ve made has marked different periods of my state of mind.”

This relatively new sound, he says, comes from “being less worried about how people will receive a certain sound” or how it aligns with his brand. “I think it’s important for me to show all parts of myself in different forms so that they get a better understanding of me”, he says.

Such a strategy is intentional. “On The Estate” is slated to be JYellowL’s final release before the roll-out of material from the artist’s upcoming debut album, and Uddoh wants fans to have a good idea of him in all his plurality, so future releases don’t come as a “shock to their systems”.

The new track is produced by long-time partner to JYellowL, Chris Kabbs. The duo came about when Uddoh reached out to the producer while still in school. Kabbs was impressed by JYellowL’s work, and offered to reproduce the musician’s track with his own beats – despite JYellowL having no budget whatsoever. “Since then he took a leap of faith, and hopefully he’s reaping the benefits by now”, Uddoh says, modestly.

Since then, JYellowL has earned a reputation among Dublin rappers as an artist who deals with controversial issues. Early releases such as “Life Right Now” and “Cold In The Summer” tackled topics such as racism and the immigrant crisis.

Asked if there’s a need for more socially conscious artists, he pauses, and responds with an analogy: “There’s that element where instead of watching the news, I could just watch The Fresh Prince of Bel-Air instead and make myself feel good.” He adds: “I think more people should be talking about more things that are real to them. You don’t have any obligation to talk about something you know nothing about.”

JYellowL’s remaining support slots with Nelly are in the process of being rescheduled. In the meantime, “On The Estate” is available on all streaming platforms.