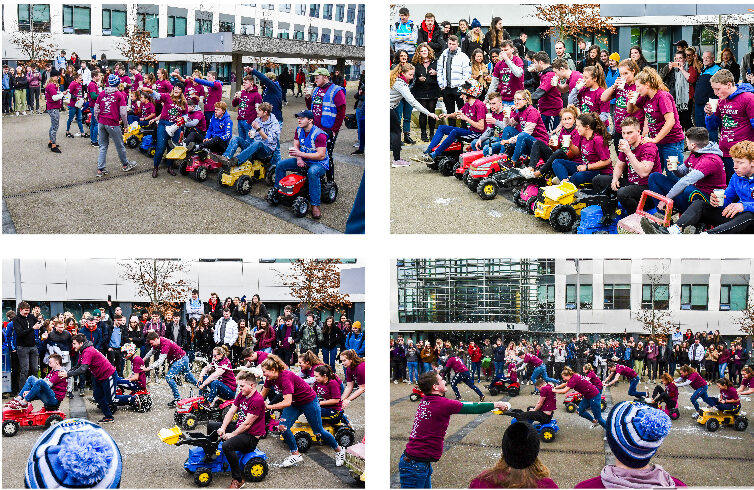 UCD’s agricultural society has 1,000 members and a 28-person committee – and its events include mini tractor races.
Tara Kent for The University Times

For generations, agriculture has played an integral role in the growth of Ireland’s social, political and economic landscape. Although it is renowned for its lush green pastures, hill-grazing sheep and red rusty tractors, the Irish farming sector represents more than just a cosy cultural phenomenon. Today, the agri-food sector is internationally known. It’s Ireland’s largest indigenous sector, contributing billions to the country’s economy every year and providing employment for 7.7 per cent of the working population.

However, in some areas, notably the capital, Ireland’s farming community tends to be trivialised and viewed through a distorted lens that brings the rural–urban divide into glaring focus. It is of little surprise then, that one sect of the farming community in particular is viewed with an element of suspicion and a hefty dose of disbelief – the student farmer.

Traditionally in Ireland, the oldest son would inherit their father’s land, meaning that any ambition to go down the academic route was replaced with the reality of working on the farm. Since then, the industrialisation of animal and crop production has sprouted a vast number of agriculture-related careers in agri-business, food science and specialised roles. This has meant that the variety of possible agricultural career opportunities for young farmers is radically expanded, allowing them the freedom to work in a diverse range of fields of their own choosing, rather than being confined to work in the field of their ancestors.

Damien Dempsey, the marketing manager of University College Dublin’s (UCD) School of Agriculture and Food Science – the only university in Ireland with such a course – tells The University Times about the limitless possibilities that a career in agriculture and food science offers all students, not just farmers. He says: “We have 12 undergraduate degree programmes and more than 1,800 students are taught.

I think people get too wrapped up with the urban rural divide. People can’t just beat farmers

Because of the sheer diversity and range of options, a lot of the students don’t come from agricultural backgrounds.” Animal science, human nutrition, agri-environmental sciences and food and agri-business management are just some of the degrees available, with many graduates securing immediate employment with internationally acclaimed agri-food businesses such as Kerry Group, Glanbia and Dairygold, and others working as inspectors, in professional solutions or in technical roles.

Established in 1905, the college is situated on a 114-hectare working farm. Speaking to The University Times, Assistant Principal Karen O’Connell says the college trains students to run sustainable and eco-friendly agriculture enterprises with a view to optimising output. In comparison to UCD, which is theory-based, “the big selling point with our courses is that they’re hands on. In the first and second year they go on placement and students love it”, O’Connell says,

For a country like Ireland, steeped in a rich and extensive farming history and culture, the social divide that often exists between so called “culchies” and “townies” is a product of the rapid urbanisation of Irish society and is the source of many long-held grudges. It is interesting that the agriculture students of UCD should form their own microcosm in a college arguably as far from farming country as it’s possible to get – south Dublin’s leafy Belfield. However, the lack of fields and total dearth of livestock in the area has not stopped the students from fostering a completely unique farming community of their own: Little Mick Ag Soc.

Established in 1922, UCD’s agricultural society is anything but little, with over 1,000 members and a 28-person committee. It’s quite staggering to watch how successful the society has become – its Ag Week charity event raised over €70,000 in aid of St John’s Ward Crumlin Hospital and Teac Tom, which is equivalent to the amount raised by the entire college community’s fundraising efforts combined, over a year.

At a recent visit to the college, I met with Aoife Bergin, a final-year animal and crop sciences student and the auditor of Little Mick Ag Soc. Bergin credits the success of the society to the support of its tight-knit farming community and the agriculture department. Although Bergin admits that the farming students face an element of stigma from their peers, it does not seem to faze them: “College would look down on us sometimes but we just do our own thing – our lecturers are great and they love what we do. They know we’re a bit lively!”

For obvious reasons, the agricultural scene at Trinity cannot be said to enjoy such high levels of student farmer engagement. However, steps are nevertheless being taken to increase awareness and foster an interest in agriculture on campus — albeit on a much smaller scale. Dublin University Agricultural Society, set up in 2017, is as close as College comes to having a culchie culture. Dónal Sheehan, a final-year BESS student from Cork and auditor of the 100-member society, says it plays an important role in creating a platform for raising awareness on campus of agriculture’s “huge potential”. It can also “break down those barriers”, he says, that prevent students from embracing their farming backgrounds with pride.

Sheehan says: “The agriculture and food sector in Ireland is worth millions to the Irish economy and people just don’t realise the potential within agriculture. There is this sort of dismissal. People don’t even know where their food comes from.”

Indeed, the spotlight has never shone so brightly on the agricultural sector as it has in recent times – but this publicity has not always been positive. As one of the greatest contributors to the environmental crisis, the farming industry has faced tough scrutiny from climate activists and students alike. However, in a world where misinformation spreads as quickly and easily as fresh slurry, this opposition has failed to take note of the fact that Ireland is the world’s first country to implement a national sustainability programme for agriculture and food. Origin Green is a successful initiative that strives to unite government, producers and the private sector to make Ireland’s food and drink sector the most sustainable in the world. As such, Sheehan thinks it is “a bit rich to be saying farmers are ruining the environment”. Although he understands why people may be frustrated about the beef protests, he says: ”I think people get too wrapped up with the urban rural divide. People can’t just beat farmers.”

Certainly, a career in agriculture is not for the faint-hearted. Even at the best of times, farmers regularly have it quite tough. Between the early starts and late nights, the gruelling manual labour and the added risks of working with dangerous livestock and machinery every day, you cannot but commend the people who dedicate their lives to the profession. However, with climate change and Brexit hammering away at the foundations of Ireland’s agricultural structures, it is perhaps fair to say that farmers today are getting more of a beating than usual, and young student farmers are disproportionately affected. According to Dempsey, while Brexit looms as a “major unknown” above the futures of agri-based graduates and farmers, he nevertheless remains hopeful for their future career prospects: “While there is concern, other markets are expanding, particularly China, so at the moment all indications are … very optimistic.”

The agriculture and food sector in Ireland is worth millions to the Irish economy and people just don’t realise the potential within agriculture. There is this sort of dismissal

Given the radical evolution of agriculture that is playing out before us at a national level, one might be forgiven for forgetting about the daily struggles and triumphs of the average farmer on the ground – or, perhaps more appropriately, the grassroot level – let alone those of the average student farmer.

However, as I soon discover, it would appear that the existence of student farmers does not even register with the vast majority of students. In writing this piece, I expected to encounter a degree of bemused surprise at the notion that there are student farmers among us in the Trinity community. But I did not expect students to react with such total shock at the idea.

There are farmers? Studying? Here at Trinity? How come I have never seen one? (Because, in case you didn’t already know, all farmers wear paddy caps.)

Even more unbelievable, though, than the undetected march of the farmers into higher education is the enormous workloads that many student farmers seek to manage. To balance not only their studies and a job, but also their varied and demanding responsibilities on the farm, is an impressive feat.

Although greater opportunities to pursue third-level education are provided to students who come from farming backgrounds today, both a desire to get back to home soil and, in some cases, the familial pressure to play a part in the family business prompts many students to return home at weekends to help out on the farm.

This is the reality for Nathan Brady, a fourth-year medicine student in Trinity who, despite having cut against the grain and chosen medicine over an agriculture career, says he is still expected to do his bit: “It is hard to keep up the farm when you have so much on. It is tough, going out to work on the farm and then coming back – it is hard work when the mind is tired.” Conversely, Robynne Shorten, a second-year food and agri-business management student in UCD, happily drives for three hours every weekend to get home to Cork, in order to milk the cows and feed the calves. In an email, Shorten says: “It’s great to get a break from the madness in Dublin and earn some money for the week. I also have a part time job in [an] agri-food business every weekend and so I try to fit in my studies during the week in college and dedicate my weekends to working at home.”

But just as a farmer can be lured back to the comfort of home turf, so too can a person be eager to escape from it. Fergal Guihen, a third-year general nursing student at Trinity, grew up on a small sheep and cow farm in a coal mining village in Co Roscommon. For Guihen, staying at home to work on the farm was never an option: “I was always going to go to college. I didn’t want to be in a small village all my life. I wanted to spread my wings.” That said, Guihen appreciates the “great life experience” that farming has given him.

Year on year, the agri-food sector is becoming an increasingly valuable part of Ireland’s economy. Ensuring Irish agriculture produces high quality, safe, traceable and nutritious food through sustainable practices reflects agriculture’s changing role and structure in society. What was once an imperious institution of tradition is now a dynamic, lucrative and incredibly diverse sector to work in. Indeed, with such a breadth of opportunities allowing for a greener, more sustainable farming future, it is time that young people started taking agriculture – and the students within it – seriously. As Dempsey puts it: “Agriculture and food science deal with things we all care about deeply, whether [you are] involved or not in the sector. It is a big contributor to all our lives.”