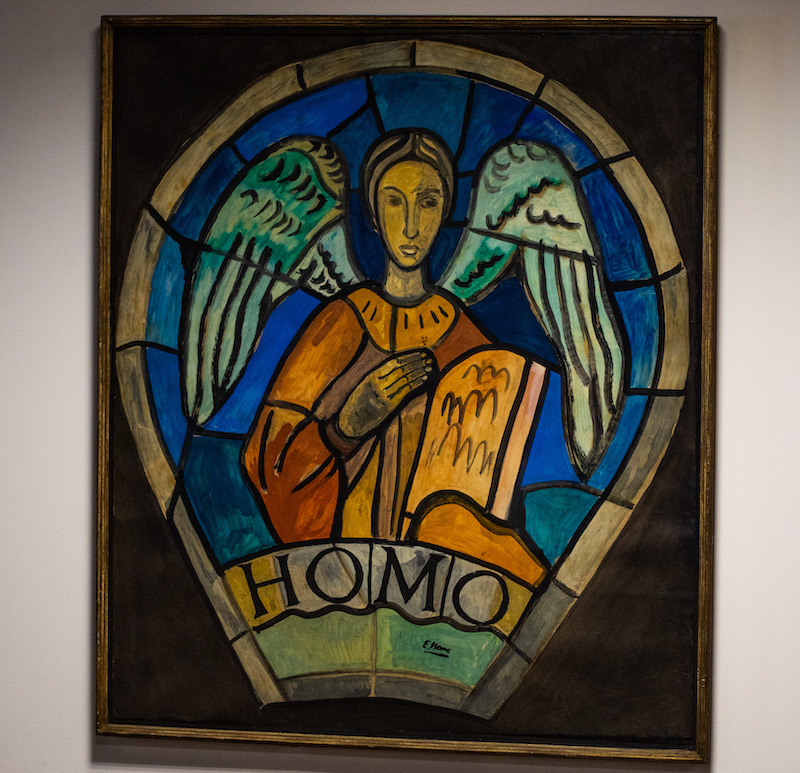 Trinity is home to hundreds of impressive works of art. As students, we quickly become desensitised to the vast quantities of world-class artwork on campus. Although the Arts Block is not known for its striking beauty, this year, Evie Hone’s work brightened the building’s dreary interior, and encouraged students to look up.

These works are a series of preparatory designs by the eminent Irish artist Evie Hone, for her “Rose Window”, a stained glass window in a small church in rural Donegal. The sketches (or “cartoons”) were created by Hone in 1953.

The painted works have the Latin names for the evangelists in brackets incorporated into the design – Matthew (Homo, man); Mark (Leo, lion); Luke (Bos, ox); and John (Aquila, eagle). Usually, these delicate pieces can be found in the staircase of the College Chapel in Front Square, but are being rested from the light in their temporary home in the Arts Block.

Born in Clonskeagh in 1894 to an artistic family, Hone was dedicated to art from a young age. She was partially paralysed at the age of 11, when she collapsed while decorating an altar at St Thomas Church in Mount Merrion. This left her with a physical disability for the rest of her life, which would prove a partial obstacle to her work as a stained glass artist, as it is a physically demanding medium.

Hone first studied fine art in London, and then moved to Paris in 1920 to study under André Lhote, a semi-cubist painter. Her early painted work was often exhibited with that of her close friend, Mainie Jellet, to critical disdain, which was converted to acclaim by the end of the 1920s. Returning to Ireland in 1931, she began to work in what would be her medium of choice for the rest of her life, stained glass.

Why Should I Care?

Hone moved into stained glass in the later part of her career, so these preparatory “cartoons” give a wonderful insight into the artist’s skill in design, sketch and colour. The large sketches are striking, and play into one of the most interesting aspects of Hone’s craft – the tension between, and union of, contemporary and religious artwork. Hone was unashamed of her Catholic faith. In fact, the artist died while attending Mass.

We often see religious artwork through a solely theistic lens, but in Hone’s sketches, and her incredible stained glass works, the artist invites us to look again with a different perspective. Her works’ colours, designs and perspectives allow us to view artwork that uses religion and divinity as its inspiration as craft in its own right, outside of the divine purpose it can also serve.