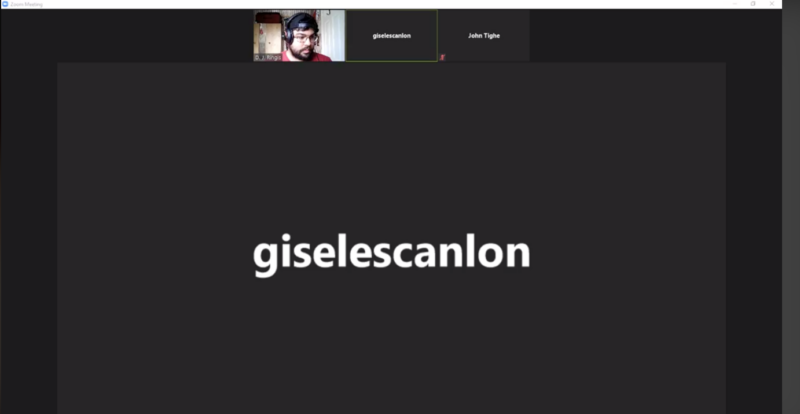 Gisèle Scanlon, the sole candidate for presidency of the GSU, was forced to turn off her video as a result of connectivity problems.

A debate between candidates for the position of vice-president, Joseph Keegan and Abhisweta Bhattacharjee, started fairly brightly, but quickly lost steam as the debate dragged on past the originally planned time limit.

Scanlon, for her part, avoided much scrutiny – mainly as a result of the garbled nature of the debate – and when challenged circled back to her experience as vice-president and her desire to build a “caring” GSU.

Not many postgraduate students tuned in to the hustings, with the number of viewers of the livestream hovering around the 30 viewer mark. Those who did were probably uninspired by pitches that will likely have done little to capture the imagination of voters.

Scanlon’s speech had an unfortunate start, with a rake of technical issues culminating in her disappearing from the call entirely. She remained absent until Daniel John Ringis – who moderated the debates – eventually started a new Zoom call without Keegan and Bhattacharjee.

Eventually, after approximately a half an hour wait, Scanlon began her speech, which remained difficult to hear due to a poor connection. Despite saying that she wished she “had an opponent”, it was surely a relief for Scanlon to be able to focus on her experience from the past year rather than battling to make a unique point. Unsurprisingly, she focused heavily on the experience she gained as vice-president this year, emphasising the “continuity of care” she hopes to provide.

“Everything I’ve learned as a vice president I can put towards the presidency”, she said. She focused heavily on the welfare side of the president’s role, such as improving postgraduate spaces and working to provide them with facilities to heat up food. It was clear that Scanlon wished to present herself as altruistic – “I’m running for president because I care”, she said.

“Care” was by a long stretch the buzzword of Scanlon’s speech, which made for interesting listening, given that she achieved notoriety this year due to a public falling out with GSU president Shaz Oye – with whom she ran for vice-president on a joint ticket.

Political issues seemed an afterthought for Scanlon, who was obviously eager to focus on welfare issues for students, culminating in her describing her desire to create a “caring, listening and aggressive union”. She promised to “continue to stand for research”, but only when questioned by Ringis did she expand on this, describing how she would continue to work with PhD students’ rights to fair pay, mental health supports and safe working conditions.

The connection cut out when Scanlon was asked about conflict resolution – perhaps a fortuitous technical lapse given that one commenter on the debate had asked about her spat with Oye.

Her closing statements were again dominated primarily by promises of a “caring” GSU and a reiteration of the importance of the experience she brings to the role. Many viewers will have left the livestream with plenty of questions to ask about the specific issues that postgraduates are facing – and in particular about her public falling out with Oye.

Facing into one of the most difficult years for students in recent memory, students could perhaps have expected more fireworks during the only contested debate in this year’s GSU election. Neither candidate, however, was particularly inspiring – undoubtedly not helped by the unusual format of a hustings peppered with technical issues.

While both candidates gave broadly similar visions for the future of the role, it is fair to say that Bhattacharjee honed in on specific welfare issues and gave a clearer route to solving those issues than Keegan, who spoke in broad strokes about the importance of postgraduates in Trinity but never really got into the nitty gritty of GSU policies.

Unsurprisingly, both candidates spoke about the challenges that postgraduates will face as a result of the coronavirus, with Keegan saying that the pandemic gives postgraduates “an opportunity to rewrite some of the old rules” in favour of postgraduates. Again, however, Bhattacharjee dealt more with the specific problems that the coronavirus will throw up for students, but did not embrace the idea that the pandemic could be an opportunity to improve the situation of postgraduates. In what became a trend in her speeches, she circled the issue back to student welfare — likening postgraduate students to a family, she said: “We move forward together, and never alone. That is what families do.”

When it came to welfare issues, Bhattacharjee was again more concrete in her plans, saying: “I want to make sure that every member of the postgraduate community feels safe and looked after.” Referencing her experience as a counsellor, as well as her time working with Scanlon, Bhattacharjee insisted that the welfare of students was top of her priorities. Outlining plans to keep in mind students with children at home, financial trouble and those far from home, she emphasised that her portfolio is in “education and welfare”.

Keegan promised to “engage with all students with empathy”, but compared to Bhattacharjee, he failed to convince his audience why he was the right person to do this. Again, he returned to networking, pledging to “keep connections going” and “establish close ties with university management”. Keegan’s ideas were not bad ones, but ultimately Bhattacharjee’s vision came across as more focused.

As time went on the debate lost steam, leading to a lengthy conversation about whether or not students should be able to opt out of receiving emails from the GSU. This was perhaps a suitable end to what was a long, drawn-out debate that’s unlikely to have captured the imagination of viewers. Bhattacharjee came out on top overall, and Keegan will undoubtedly hope to lay out a more concrete argument for his vice-presidency in the written hustings that take place next week.