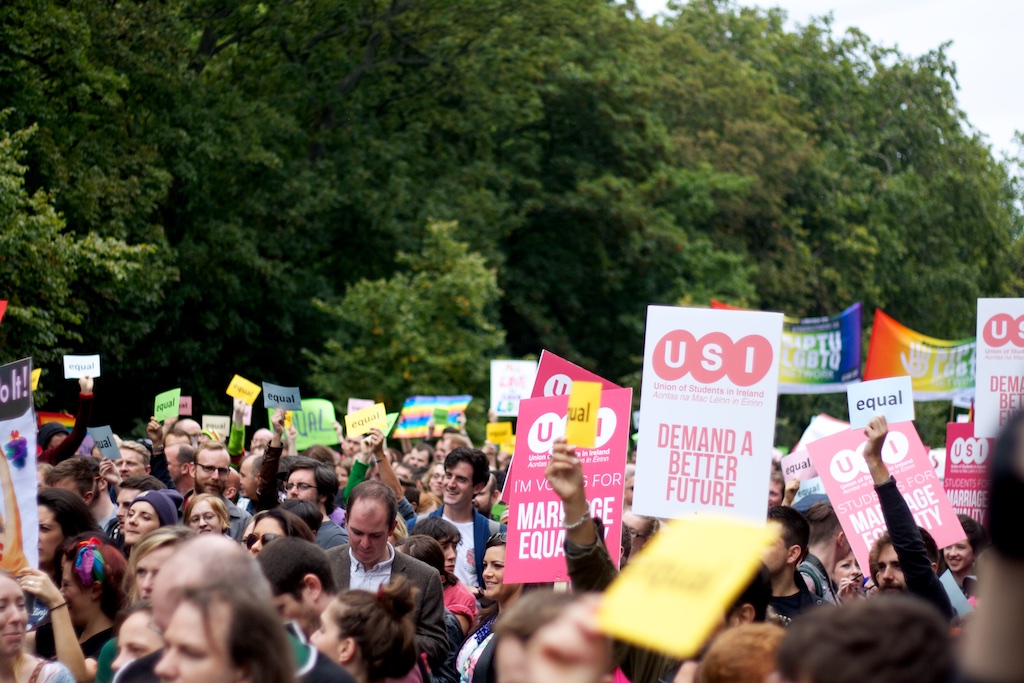 These days, Domhnall McGlacken-Byrne isn’t able to get involved in political and social campaigns as much as he’d like. Once the president of Trinity College Dublin Students’ Union (TCDSU), five years on he’s a “graduate with a full-time job”, and often there just aren’t enough hours in the day.

“Appreciate how positive a thing that is to do – to be involved in a political campaign, or a social movement”, McGlacken-Byrne says, by way of advice to today’s students – “or even to myself five years ago”.

“That’s definitely something I didn’t appreciate as a student.”

Five years ago today, McGlacken-Byrne – like thousands of students around the country – was biting his nails as he waited on the results of a referendum on same-sex marriage in Ireland. As president of TCDSU, he was an important cog in a student machine that saw thousands turn out to vote for marriage equality.

Laura Harmon was the president of the Union of Students in Ireland (USI) at the time. In the weeks leading up to May 22nd, 2015, she had led a student movement that made the issue of marriage equality its own. But “there was always the fear of the silent no vote”, she says.

There was this pressure to make sure we got it right, and that we didn’t look back on it with any regrets

McGlacken-Byrne says: “It made me feel sick in my stomach – the fear that it could have been a no vote, and how hurtful it would have been for so many people.”

You couldn’t blame them for feeling nervous. For many students, this was the biggest campaign they’d ever participated in – and one with a long history. “We kind of felt that we were kind of blow-ins, and there was a lot of history weighing on it”, says McGlacken-Byrne. “There was this pressure to make sure we got it right, and that we didn’t look back on it with any regrets.”

Kieran McNulty, then a Trinity student and later a TCDSU president, was heavily involved in the student campaign. “I think there was quite a bit put on them to get the young vote out”, he says, “because I think the feeling was that this would pass in Dublin and among the youth”.

For USI, TCDSU and almost every one of Ireland’s students’ unions, it was an intense few weeks – but a national reckoning on marriage equality had been on the horizon for a lot longer. All year, student leaders had been thinking about their role in a campaign that pitted Ireland’s old order against a progressive tendency as emboldened as it had ever been. 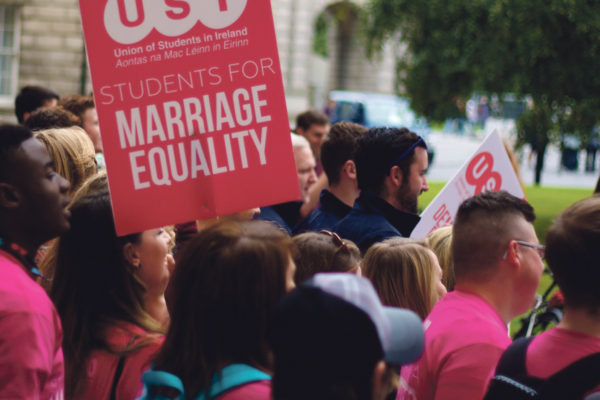 Ireland’s unions felt the biggest contribution they could make, initially, was making sure students turned out to vote.

Ultimately, they figured, the most effective thing they could do was to make sure students turned out to vote. That meant voter registration drives – and lots of them.

“The biggest thing that TCDSU did ahead of the referendum – and this was a months-long, very co-ordinated, extremely diligent, comprehensive campaign – was voter registration”, says Edmund Heaphy, a former editor of The University Times. “And that was always going to be one of the ways in which TCDSU could have the biggest impact: getting people who were likely to vote yes registered to vote, and then encouraging them to actually go and vote.”

Despite doubts in some quarters about whether young people could actually be trusted to make it to the ballot box, inside the campaign such qualms were few. “There was no doubt in my mind that there was going to be a high youth vote in the campaign”, says Harmon.

Trickier to tell, at the time, was the precise role students would play within the Yes Equality coalition. Students’ unions had been calling for marriage equality for decades – as USI president, Eamon Gilmore demanded it from the government as far back as 1977 – but so had many others. It wasn’t obvious where the student bloc fitted.

The biggest thing that TCDSU did ahead of the referendum – and this was a months-long, very co-ordinated, extremely diligent campaign – was voter registration

But to progressive Ireland’s more experienced voices, students were a huge asset – not only in terms of numbers, but also for the leadership they took. Ivana Bacik, a former TCDSU president and now a long-time Labour Senator, says the yes campaign’s student leaders “were very capable and well able to mobilise their own movement”.

“They were really good, seasoned campaigners themselves, so it was a very well-run campaign – and really fitted well within the national campaign as well.”

In a referendum that got wall-to-wall coverage, it’s perhaps unsurprising that students’ role made national headlines. But it’s hard to argue that initiatives like TCDSU’s “ring your granny” scheme, or USI’s attempt at a world record for the biggest-ever human heart, didn’t make a genuine splash amid the noise.

Harmon has particularly fond memories of the world record attempt, staged in Smithfield Sq in the pouring rain. “It was the only rainy day in the whole month”, she laughs. “But we still had over 500 people turn out to show that they were in favour of the yes vote.” 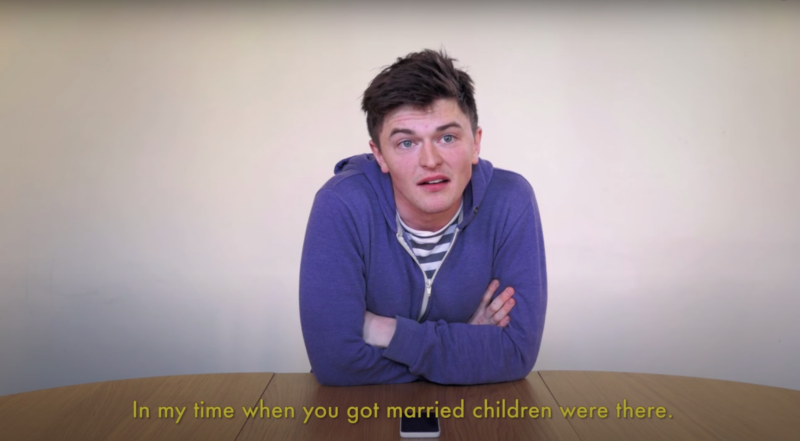 In Trinity, a video of students ringing parents and grandparents to discuss the vote picked up over 70,000 views on YouTube. McGlacken-Byrne thinks it made such an impact because it tied into the idea that “LGBT rights was not an abstract thing – it was your son, it was your grandson, it was the person you knew and cared for”.

“Trinity really evoked the spirit of the moment, and every night you’d see massive hordes of students head out to canvass for Yes Equality”, says Heaphy. “It was hard to walk through Front Arch without feeling like the country was on the cusp of something huge.”

But there were doubts, too, Heaphy says. “I was worried that the ceaseless affirmation of Trinity and Dublin – they’re inherently liberal places – was giving way to a kind of blithe optimism about the result.”

Ultimately, McGlacken-Byrne thinks, high-profile figures like Mary McAleese – who spoke three days before the vote in favour of a yes vote, in a significant show of support for the campaign – were crucial in winning over any “silent no” that might have existed. 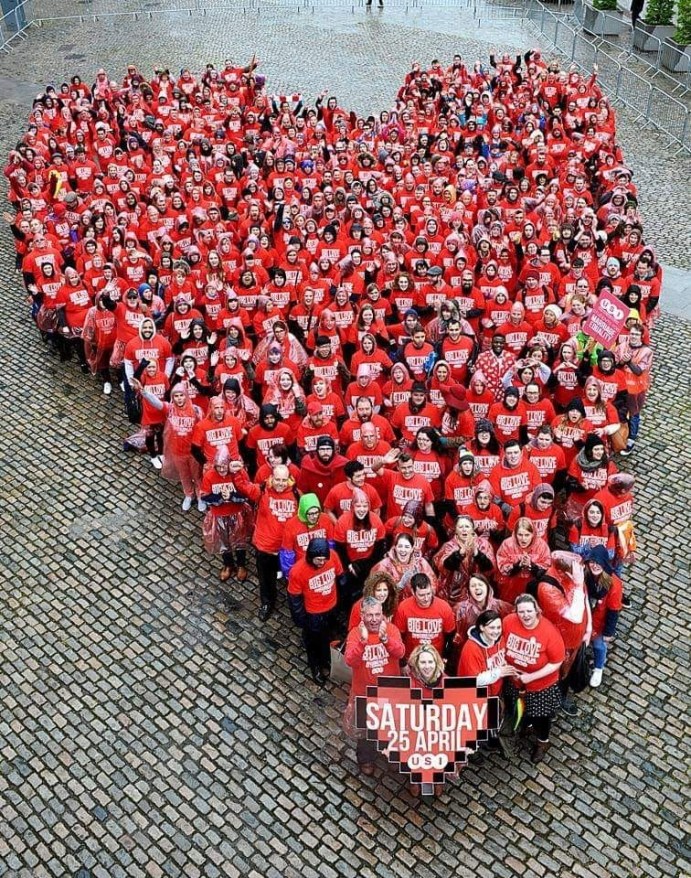 USI attempted to set a world record for the biggest-ever human heart – in a sodden Smithfield Sq.

As for the day itself, when the result came “it was probably one of the proudest moments of my life”, Harmon says. “It was just a feeling of pure relief, really, and joy.”

McGlacken-Byrne says: “It was just one of the most wonderful, positive days I’ve ever experienced. Just, the sense of relief, and joy, and exuberance – there were literally people dancing in the streets.”

It’s easy to imagine the scenes – it had been a long, stressful campaign, and a student movement at the peak of its powers had made a huge contribution to an issue of lasting national significance.

Five years later, and with the benefit of hindsight, it seems students took valuable lessons from some parts of the campaign, but not from others. They played a big role in the 2018 campaign to repeal the eighth amendment, but on other issues – notably fees – students haven’t been able to convince politicians that their arguments are worth paying to support. 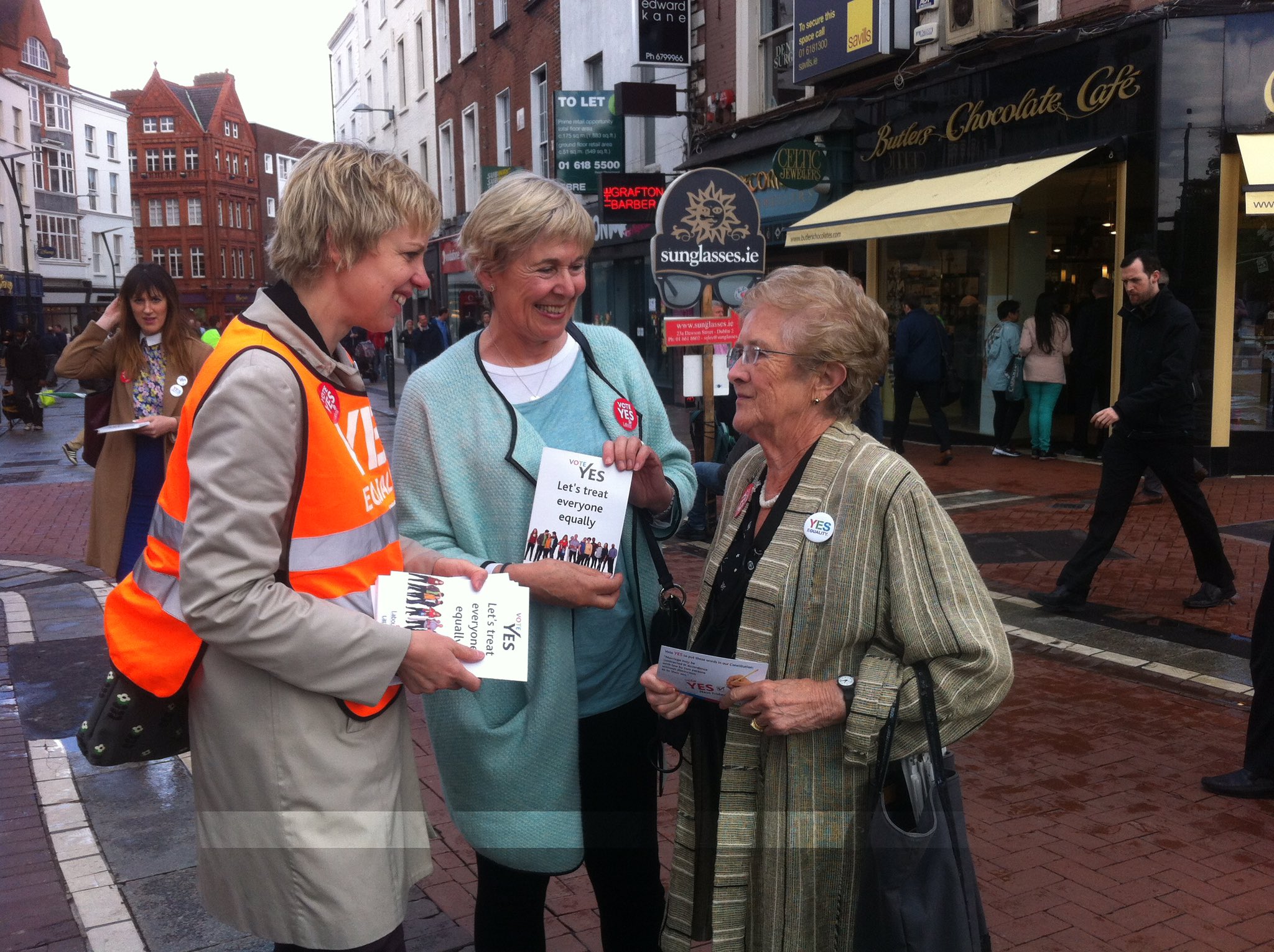 Heaphy says that, “in the wake of marriage equality, USI in particular overestimated its influence and how much students and young people were going to be considered a major power centre in politics – in the same way that elderly people are considered a voting bloc – and therefore didn’t take inventive steps to shape the debate in higher education”.

Perhaps the joy of winning such a momentous referendum made students forget about the long, hard slog that had come before it. This was one win, but not the final victory. In essence, it’s arguable that the movement came to the wrong conclusions.

What’s clear, though, is that there will be more campaigns – and that students are likely to be at the centre of them. Because there’s arguably never a better time to get involved in campaigns that can shape the country, McGlacken-Byrne says.

“When you’re a student, you don’t really appreciate it at the time, but the time is so ripe to get involved in that type of movement.”