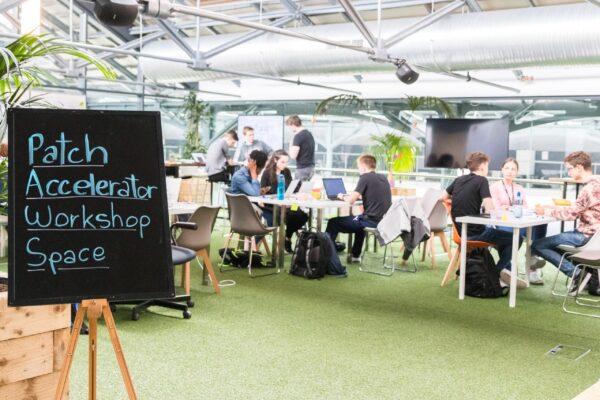 Collaboration is a catalysing force that often does not get the recognition it deserves. Over the last few weeks, echoed in the steps of those who march in protest and the claps of appreciation for healthcare workers, the phrase “stronger together” has taken on a new – and exciting – resonance.

After all, “success is seldom if ever, achieved in a vacuum”, as Tom McCarthy, the founder of Patch and a third-year physics student in Trinity, points out.

This idea – that collaboration can be a determinant of success – finds itself at the heart of his summer accelerator programme. “It’s core to Patch that we bring together like-minded peers”, McCarthy says. “Anybody who has achieved something did it with the support of other people like them.”

This six-week accelerator programme, for “exceptionally able” young people, runs from from July 8th to August 19th following last year’s successful pilot programme. Applications are open until tomorrow, for a scheme that not only encourages collaboration but affords participants the opportunity to work under the mentorship of some of the world’s best-known scientists, engineers and entrepreneurs so that they may work on their own ambitious startups.

Ultimately, the programme is about accelerating great young minds by teaching them how to develop start-up skills and knowledge through practical workshops delivered by experts so that some day, they might create globally impactful companies, technologies and research.

It’s core to Patch that we bring together like-minded peers. Anybody who has achieved something did it with the support of other people like them

However, the programme’s past participants – which include previous BT Young Scientist winners and current Pioneer participants – are no strangers to success either. Indeed, it was their success, and ideas, that caught McCarthy’s attention and earned them a place on last year’s programme.

“It’s a funny story”, huckles Micheál McLaughlin, one of last year’s pilot participants and founder of Cropsafe, a startup using machine learning and satellite imaging to monitor crop health for farmers. We didn’t apply, so I think that was one of the things that Tom did – he reached out to a lot of people.”

“We applied to the BT Young Scientist and … Tom was one of our visitors.”

For McLaughlin and his partner, the insights and advice offered by mentors at Patch were instrumental in progressing their idea: “[They] tell you about their mistakes and what they learned, and then you can basically stand on their shoulders and build your project.”

Described by McCarthy as a “consistent guiding light”, the mentors seem to play a key role in the Patch programme.

“You didn’t just hear the typical business advice”, Diana Bura, another past participant and previous BT Young Scientist winner, explains. “They told you their back story, what they learned – the hard way and the easy way.”

Unlike McLaughlin, Bura did not enter Patch with a firm project idea in mind. “We kind of did come in with vague ideas, some of them a lot more concrete”, she says, “but ultimately I don’t think anybody ended up working on those ideas”. 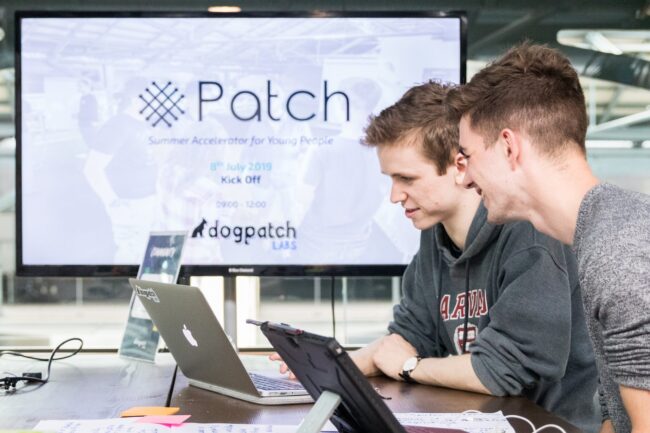 Even when Bura and her teammates did begin work on their 3D printing project, she admits that it was “great to bounce ideas off each other. That was definitely one of my favourite parts”.

It appears that Patch’s innovative and collaborative approach to projects was attractive to both participants and mentors alike.

“The education system, for better or worse … has to remain standardised, [it] can’t move as fast as the rest of the world”, says James Whelton, co-founder of CoderDojo and a Patch mentor. “Whereas the wonderful thing about accelerators is that [you can] … give exposure and introduce thinking that’s not really available or there through the education system … which gives the opportunity to level the playing field in some respects.”

It’s not only in its pedagogy that this programme seeks to level the playing field – it’s funded through philanthropy, and requires no monetary contribution from participants.

“Being philanthropic enables us to find really great people”, McCarthy says. “In America there are plenty of places, summer programmes, that charge a couple of thousand dollars … that is simply less accessible from the outright.”

The accessibility of the programme also contributes to its diversity. “We are all coming from different backgrounds”, says McLaughlin. “Everyone has this unique insight and passion [for] what they’re working on.”

However, Patch participants also gain new insights. After pitching her project to venture capitalists during the programme, Bura began to realise that “entrepreneurship experiences are pretty important – not just for the business students but also for the scientists”.

“A lot of us that were there were very into science”, she explains, “and I guess we also realised that there is another side of the world, and that science wasn’t just our perfect little bubble”.

But amid a global pandemic, experiences like Bura’s are difficult to co-ordinate and new challenges begin to emerge, particularly if the programme has to move online. “It was tricky”, McCarthy admits. “For a second, there was a question of whether Patch should run this summer, but not for very long.”

“It won’t be identical to having sort of 10, 20 or 30 people buzzing in a space”, he concedes. However, he remains confident that this year’s cohort will still “build a community”.

Bura believes that moving online may actually offer some advantages: “A little bit of remote work, or a couple of hours where you’re very hyper-focused or working intensely on your project, is also really good. I think that’s one of the main benefits of Patch this year.”

Whelton is also confident: “You can achieve a lot of it through video calls, and maybe there is something to be said about it. If the future of work is remote work, this is a very interesting opportunity to build these disciplines.”

It’s like you go through the Patch door and then, all of a sudden, you see all these other doors

Nevertheless, Bura warns that this year, without face-to-face contact, the onus will be on participants to “keep in contact as much as possible” to “help strengthen that connection”.

Her advice is unsurprising, given the lasting connection between last year’s participants. McLaughlin agrees: “We have continued the bond from Patch into the future, into now, and we’re still interacting through Zoom and stuff like that.”

The strength of this connection is a testament to the impact that Patch has on its participants. As Bura points out, “while we weren’t paid money to work on these projects, like other incubators do, we were paid with knowledge and skills”.

Indeed, the skills and knowledge they acquired enabled last year’s participants to reap some very positive rewards: “Cropsafe is now top 10 in the [Pioneer] global leaderboard, so if it wasn’t for Patch, we wouldn’t have found out about Pioneer and we wouldn’t have got that opportunity to kind of move on to the next stage”, McLaughlin says.

However, for these aspiring young people, Patch is not the final destination, but a stepping stone that offers a myriad of possibilities. McLaughlin chuckles when he says: “It’s like you go through the Patch door and then, all of a sudden, you see all these other doors.”