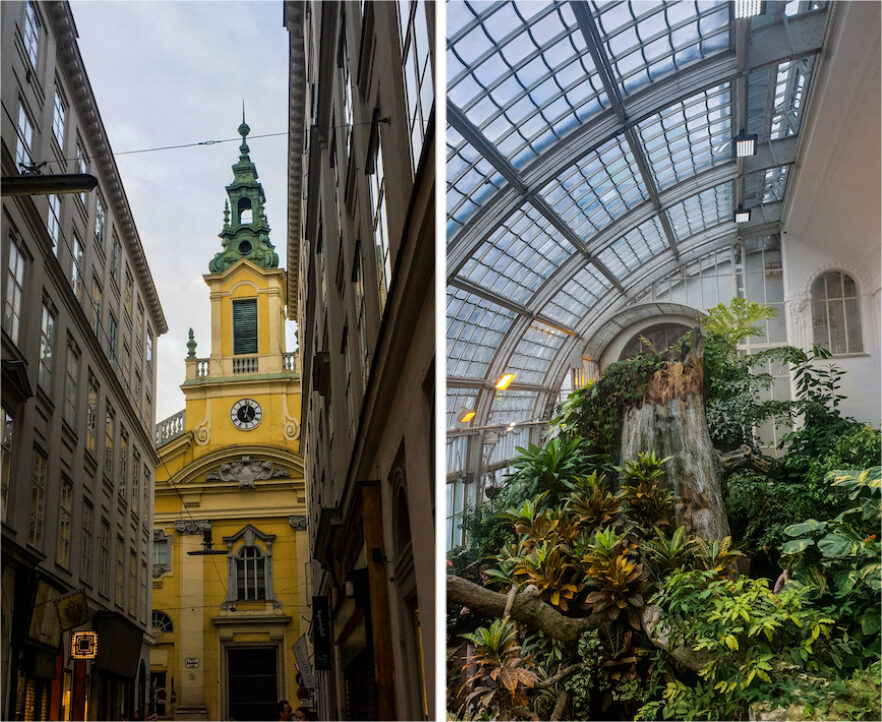 Photos by Orla Murnaghan and Emma Taggart for The University Times

In recent months travel has come to a juddering halt as a result of the coronavirus, with lockdowns keeping citizens home and planes grounded. We can’t say with any certainty what travel will look like in the future, but it’s worth looking back at trips to some of the world’s sights, taken before the pandemic hit. Vienna, it’s clear to anyone who visits, certainly qualifies as a city worth visiting, with a rich history and an array of sights, sounds and tastes that offers something for everyone.

Emma Taggart: Tranquility, and an Escape from the Concrete Jungle

One of the reasons Vienna is so well-known is that it has been home to a long list of famous faces, with Beethoven, Mozart and Freud counted as past residents of the city. Indeed, this cultural and historical legacy is one of the main reasons it continues to attract so many visitors year after year.

I’d never been to Austria or a German-speaking country before, so I didn’t know what to expect when I first arrived. However, given that the sun was beaming down on me, I was instantly put in a good mood and the efficiency of Austrian public transport only seemed to help.

The atmosphere of Dublin is one of hustle and bustle most days of the week, where pedestrians scurry across roads dodging an angry cyclist or the odd Dublin bus. In Vienna, it was positively tranquil. Even on the metro at 8.30am on a Wednesday, I was astounded to find plenty of empty seats. It was a far cry from the packed Luas trams, where commuters are squeezed in like sardines.

If you are a history or politics buff, the Hofburg Palace is the place to go. What was once the imperial palace of the Habsburg dynasty is now home to the President of Austria, Alexander Van der Bellen. In fact, Van der Bellen is lucky enough that the palace is also his official workplace. It takes the idea of working from home to a whole new level, with its expansive grounds you can easily get lost among the government buildings. 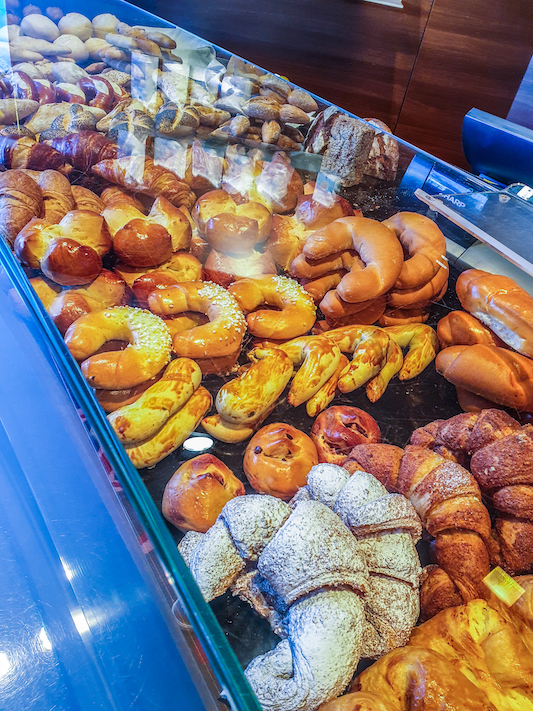 If you’re a foodie, you certainly won’t be disappointed, with the city’s most well-known market offering an array of baked goods.
Emma Taggart for The University Times

Hidden at the other end of the Hofburg Palace, I came across the Schmetterlinghaus, best translated as a “Butterfly House”. Having initially not intended to go there, I sheepishly wandered in, bought my ticket and was instantly transported to a tropical paradise that was home to butterflies of all shapes, sizes, and colours imaginable. I spent my time meandering along the marked out path that took me past a variety of tropical plants while butterflies darted overhead.

While the French are commonly thought to have the best pastries in Europe, it seems Austrians are in for a shout too. I didn’t have to walk far to find the smell of bread wafting out the doors of a local bakery. If you’re a foodie, you certainly won’t be disappointed here, with the city’s most well-known market, Naschmarkt, offering an array of both Viennese and international goods. Market vendors were all too happy to let me sample their products, reeling me in with their charm before offering me some of the most delicious cheeses and croissants I’d ever tried.

Being a bit of a culchie, I will unashamedly admit that when I’m visiting a city I will look for the largest green area I can find and head there to escape the concrete jungle that makes up so many cities nowadays.

Even on the metro at 8.30am on a Wednesday, I was astounded to find plenty of empty seats. It was a far cry from the packed Luas trams

Luckily for me, I ended up at the Schönbrunn Palace and gardens, which was as impressive as it sounds, with expansive grounds that housed a variety of plants, statues and even Europe’s oldest zoo.

But perhaps the most impressive feature of the gardens were the views. After I plodded my way up to the highest point in the gardens, it seemed as though the whole of Vienna was laid out before me. Luckily for me and my tired legs, there was a cafe conveniently located at the top, and although it was ostentatiously overpriced, the coffee and cakes were graciously welcomed by my empty stomach.

All around Vienna, particularly in the city centre, I came across gatherings of electric scooters lined up simply begging to be used. My curiosity got the better of me one evening and after downloading an app and wincing as I entered my debit card details, I was free to scoot around the city to my heart’s content. Making the most of Vienna’s riverside paths, I tried to unsuspiciously haul the scooter down a flight of stairs from the pavement onto the footpath along the riverside. Despite getting a few stares from locals, I safely navigated my way down and spent an evening getting to know Vienna from the along the Danube River.

Orla Murnaghan: So Much to See, So Little Time

Surfacing from the futuristic metro, I blend effortlessly into the crowds congregating in the centre of Vienna: as a seasoned solo female traveller, I am an expert at looking as if I am in natural habitat beneath the towering gaze of its limestone Baroque buildings – and even learn some of the vernacular to avoid pickpockets.

“Entschuldigung”, I quip, imitating the aggravated local as I weave in and out of clusters of tourists. My path spills over and drifts me along onto Kärntner Straße. Translating as Carinthian St, this is Vienna’s main shopping thoroughfare, flanked with stores parading all the illustrious brands I know I will never be able to afford: Rolex watches, Louis Vuitton handbags, Cartier jewellery. But it’s fun to imagine.

I can practically smell the old money off the cobblestone pavements: you can tell the history of this city is one of immense affluence. Each new turn is more extravagant and profound than its predecessor: the remnants of a bygone imperialist era are enthralling, but deeply unsettling when you remember Vienna was once the beating heart of the Austro-Hungarian Empire.

The full history of the empire can be explored at the nearby Heeresgeschichtliches Museum, known as one of the world’s most important military museums, tracing everything from the assassination of Franz Ferdinand in 1914 all the way up to the dissolution of the Austrian empire and beyond. And as I stand beneath the gates of the Hofburg Palace, gazing out on the Heldenplatz – or “Heroes’ Square” – the very spot where Hitler gave his infamous Anschluss speech in 1938, I can’t help but feel melancholic: this focal point served as an epicentre of both world wars.

My trip to the Albertina museum is a more pleasant affair. I spend hours poring over the splendors housed there. The museum is known for housing a familiar piece I’ve only seen in dusty secondary school textbooks: Albrecht Durer’s Young Hare, famous for its uncannily photographic realism despite being commissioned in the 16th century. Unfortunately, I just miss it by a month, as the painting only goes on display once every 5 years.

After that, it’s onto the nearby Vienna Volksoper. As dusk settles in, the imposing building is illuminated with cerulean lights, showcasing its Renaissance-style columns and elaborate glass windows. Built by Czech architect Josef Hlavka in 1869, this state opera house of Austria was bombed during the Second World War, but after lengthy restoration work, remains a favourite among locals. 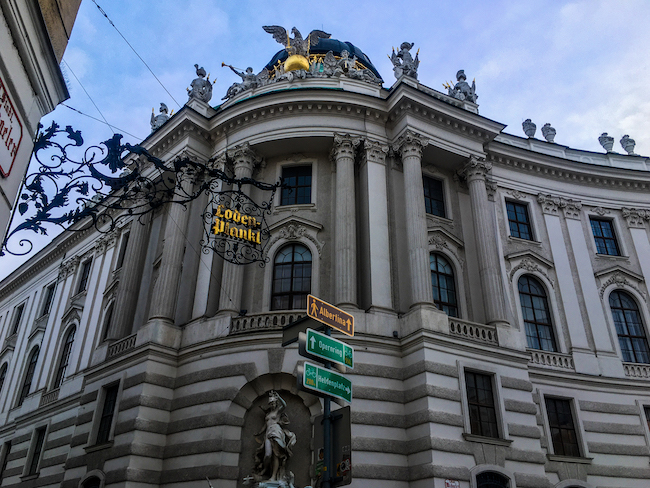 “The only regret I have about Vienna is that there is simply too much to see on a weekend trip.”
Orla Murnaghan for The University Times

Walking ahead of me, I see a group of young people my age, chattering excitedly in German. They are dressed to the nines, in full-length ballgowns and black tuxes. I feel a spike of jealousy: as I had previously learned the hard way at the Mariinsky Theatre in St Petersburg, it is expected – and only polite – to dress appropriately when attending a Saturday evening performance with your friends, even if you are lucky enough to get one of the coveted €10 weekend tickets especially reserved for students.

Later that night, after visiting the Wiener Eislauf-Verein and taking some blurry shots of the iconic Giant Wheel, I go back towards one of the most instantly recognisable symbols of Vienna, St Stephen’s Cathedral. Dating all the way back to the 12th century, this church was initially housed outside the old city walls, but as time went on, it served as a hive of activity for the Viennese. Its Romanesque and Gothic turrets dwarf its surroundings, sweeping the eye 133 metres upwards at the steeple’s highest point.

The only regret I have about Vienna is that there is simply too much to see on a weekend trip. My time constraints prevented me from seeing Klimt’s iconic painting The Kiss in the wonderlands of the Belvedere Palace. I missed the Schonbrunn Palace, the UN and the world-famous Spanish Riding School. Nor did I visit any of its backwater karaoke bars to drunkenly belt out “99 Luftballons”. But that’s always just a convenient excuse to come back to this phenomenal city – right?